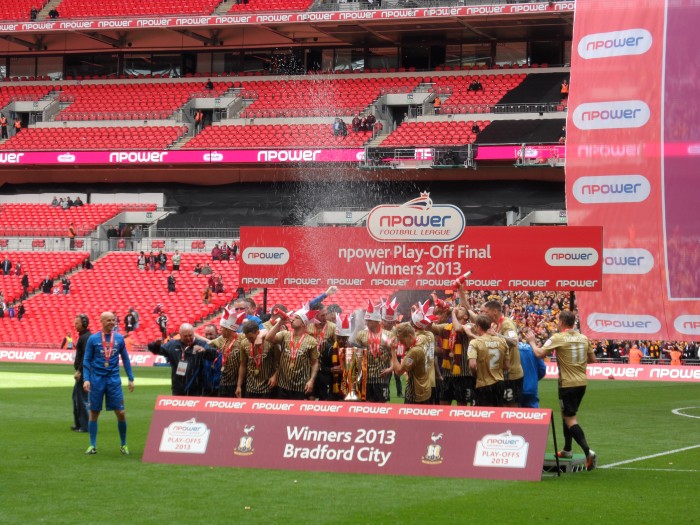 (Bradford City promoted to League One)

Saving their best performance for the most important moment, Phil Parkinson’s men were dominant upon the same Wembley turf which they were humbled not three months ago. I haven’t really bought into the redemption narrative (that never felt like the point of this journey), but for those that did, any demons haunting their dreams have been well and truly exorcised.

This season has played out like a novel. The story seemed predestined. The tracks were laid. It was meant to be this way. It wasn’t that “you couldn’t write it”, because you could. This is exactly how you’d write it. The weird thing is that it actually happened. To talk of fate diminishes the sensational reality these players have delivered, but how can you not think about it? Everything that happened today felt like a callback to a seed laid months before.

In their 64th and final game, City reached a level of performance they only ever hinted at amongst the first 63. I can’t remember a Bradford City team look that assured, that dominant. To a man, they were flawless.

Picking up where they left off against Burton, City rendered Northampton helpless. Bradford looked like a team that could have beaten Aidy Boothroyd’s men in any number of ways; Northampton’s cupboard was bare from the beginning.

It is difficult to separate the two moments which have defined this year, despite the fact they were almost polar opposites. Whereas the Swansea encounter felt like more of an ‘event’, today was a football game. This was a day for real football fans, the real reason we do all this, and it was a real football game. And what a game it was.

From minute one City were on top, and by the time anyone had time to breathe, the game was over as a contest. The 90 minutes of football from half time at the Pirelli, to half time at Wembley may have been the best in 15 years. A combined 5-1 against two of the stingiest defences, and best teams, in the division. Especially in the manner it was done, with it always looking like there was more to come.

The opening quarter of an hour saw City begin to bang on the door; the second saw it irrecoverably blown off its hinges.

James Hanson opened the scoring with a wonderful looping header back across Lee Nicholls after the reputably dominant Northampton back line again failed to reorganise, leaving Garry Thompson uncovered at the back post before he picked out the big number nine with a delicate lob across the six yard box. The Cobblers demise felt inescapable already.

The big man was unstoppable today. From beginning to end he won everything in the air, and did so against the most aerially dominantly League Two side in years. Today James Hanson fulfilled his destiny, achieving the goal he could never reach, leading us out of League Two. We can no longer underestimate his value. He led. He dominated. He put in the best performance of his career.

City’s lead was quickly doubled as Nathan Doyle wonderfully picked out Rory McArdle who reprised, almost exactly, his goal against Aston Villa with a bullet header at the near post after losing his man. Boothroyd’s men were reeling, and City dropped the hammer not long later, with a typically predatory Nahki Wells finish. The game was over before the half hour mark. These players hit their ceiling, their apex. They could have won the game by as many as they wanted to. It will never get better than that.

The defence were magnificent in the face of constant aerial pressure. The past two games have seen Andrew Davies highlight exactly why he is so important to this team, in both games laying the foundation for the attackers to flourish. McArdle alongside him was as good as he has ever been, and in Stephen Darby (baby) and James Meredith, City may have the best young full back pairing outside of the Championship.

Gary Jones was majestic, again. He and Nathan Doyle controlled the middle of the field from beginning to end. Jones is the heart of the team, and in only a season has ensured his bust in the Bradford City Hall of Fame. Parkinson spoke about his attempts to install a new culture at the club last summer, and no one has been more important in that than Gary Jones. He is irreplaceable. He is magic.

The thing about this team which makes all of this so perfect is that the entire squad, each one of them, are so likeable. They give everything they have in every moment, they never know when they are beaten, and the morale, the atmosphere is fantastic. To see a man like Alan Connell, who has every right to be frustrated, be this happy is just a delight, and sums everything great about this squad up, These men have rewritten the destiny of Bradford City Football Club.

Not many have played a more important role than Wells, who in perhaps his final act in claret and amber demonstrated everything that makes him so special, a phenomenal display, sealing another man of the match award. He finishes this marathon season with eight goals in the final eight games, and it speaks volumes for the heights he may be able to grace that he has come through so wonderfully when it mattered most. A fact true for the whole team, actually.

If this side were going to make the leap from good to great, it was always going to be on the shoulders of the Bermudian, and again he didn’t disappoint. Clarke Carlisle and Nathan Cameron were left tangled in his wake.

The outmanned central defensive pairing for the Cobblers epitomised their team’s performance. Never at any point did they threaten. Save a handful of impressive punches and catches from Northampton long throws, Jon McLaughlin was untested.

Boothroyd’s men were abject from start to finish and as a group of fans who know all too well about being outclassed on the biggest stage, there is sympathy with the Northampton fans, who really can’t have enjoyed that. Their team were set up in a way that (in hindsight) appears naive, and their players froze.

I’m not sure how much difference it would have made had their players shown up, as rampant as their opponents were.

There isn’t anything I can say about Phil Parkinson’s job this year that would do him justice. He has been vindicated in every decision he has made. He has been the catalyst that brought this club from the bottom of the Football League, to these magical heights in a matter of 18 months. Today will go down on the short list of our club’s greatest days, a short list within which he is already a frequent character.

As time passes and we look back, these players will go down in history amongst our pantheon of our greatest. To a man, they’ve all made a critical contribution at one point or another. But that isn’t really relevant today. What is relevant is that the club is now in place to keep its core, its young core, together and this wonderful story, this wonderful ending, may only be a beginning. The present is perfect; the future could be anything.

And in the end, the truth came through to the fore: it was a League Two team playing a League One team.

Not use: Duke, McHugh, Nelson, Hines

Like Loading...
‹ Back to Wembley: Play off final song three: Bradford Calling
Team Claret and Amber finish the job ›