Home › News › A sad goodbye to Will Atkinson

A sad goodbye to Will Atkinson 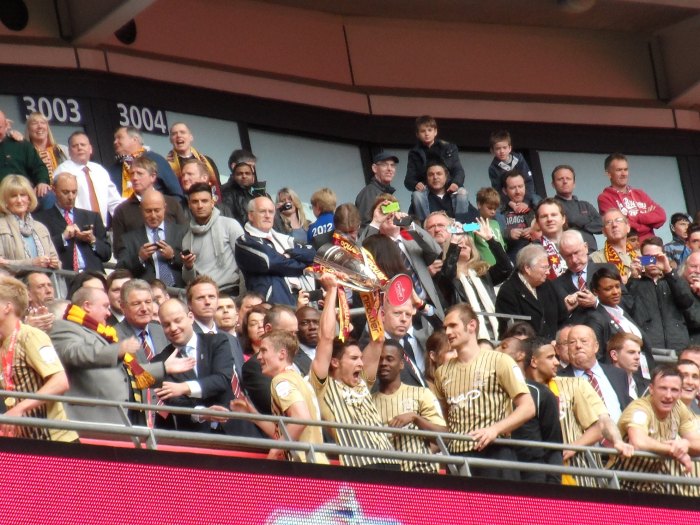 “It is really heartening to see the change in Atkinson, who has had unrivalled support from Phil Parkinson, which adds affirmation to the manager’s ability to sign, develop and mould players into the current City squad.” Width of a Post writer Phil Abbott after Bradford City defeated Arsenal.

If there is a clear logic to the decisions not to renew the contracts of Zavon Hines and Adam Baker – and a sound reasoning to why Matt Duke has turned down reduced terms to stay – it is more difficult to accept the parting of ways between Will Atkinson and Bradford City.

The 24-year-old leaves the club after playing a prominent role in one of its greatest-ever seasons. Atkinson was never going to grab the attention and adulation of others, but his unfussy and industrious performances proved to be a vital component throughout. There were only seven games of City’s marathon 64-match slog in which Atkinson did not make an appearance. He was everything that had been billed in Chris Mitchell, minus the set pieces, and such utility players are worth their weight in gold.

That he departs with our affection represents a commendable transformation too. Signed on loan from Hull City in January 2011, Atkinson got off to a dreadful start and quickly became deeply unpopular with a demanding Valley Parade crowd. I remember his debut at Bristol Rovers. A cold afternoon, a frosty pitch, Atkinson looked disinterested and uncommitted. Reluctant to get involved with the play, even the few positive glimpses he displayed seemed more for the good of himself than that of the team. It was a bad first impression.

And it didn’t get much better from there. Billed as an out-and-out winger, Atkinson’s tentativeness on the field was looked upon as a lack of passion. His better displays came away from home in front of small City followings – Barnet, where he scored his first City goal a typical example. But as the club stumbled their way to survival and Parkinson was in a position to truly ring the changes, we assumed Atkinson’s name would be added to a long list of forgettable loanees. His name only floated during conversations about the worst wingers we’d endured, or the subject of strange mocking articles.

Yet it wasn’t the end of the story, more the prologue. Throughout the close season, Atkinson was strongly rumoured to be signing on a permanent contract – and when he did indeed eventually rock up, there was a widespread sense of feeling underwhelmed. It was perhaps because of this that Mark Lawn angrily defended the club’s summer transfer activity in the T&A on the eve of the season. Blunt words, but Lawn was to be proven wholly accurate.

And for Atkinson, the opinion changing was beginning in earnest. After looking just as shaky in pre-season friendlies, for the first game of the season – the League Cup tie at Notts County – Atkinson was on the starting XI team sheet in central midfield, alongside Gary Jones. Parkinson apparently took him to one side before the match and advised him that this was to be the moment he started winning people around by demonstrating his workrate and application. Advice that Atkinson carried out and more. As the players entered the field at Meadow Lane there was a temptation to fear the worst about a makeshift central midfield and hide behind your hands. But Atkinson impressed greatly that day – the player and team firmly setting the tone for the season.

And from there the pendulum swung in positive fashion. Although not a regular starter at first – particularly with everyone fit – Atkinson’s cameos showed promise and he soon took advantage of injuries to secure a regular place in the side. Oxford away stands out as an afternoon where Atkinson had really come of age. He was superb and tormented the United defence. A memorable solo run from the halfway line almost resulting in a magnificent goal.

If there was a night that firmly won me over, it was at Hartlepool in the JPT a few weeks later. Just like his club debut at Bristol Rovers 10 months earlier, it was cold and there was a suspect pitch. The low key occasion against higher opposition offered excuses to go easy or through the motions – Garry Thompson was guilty of doing so that night. Not a bit of it from Atkinson, who worked and worked his socks off. It was games like this that cemented his value to the team. It was games like this that developed his confidence and enabled him to enjoy starring performances against the might of Arsenal and Aston Villa.

It was a Matt Duke-style revitalisation, but then the impressive Atkinson of the 2012/13 season did not seem to be playing the same role as the timid Atkinson of 2011/12. It’s not clear what sort of player he was before joining us and how much credit Parkinson should take for the transformation, but the work rate, tackling ability and measured flair on show from Atkinson last season was a joy to behold. In Parkinson’s new-look wideman strategy, Atkinson matched Thompson as a good wide outlet with the ability to tuck in and play as an additional central midfielder when City didn’t have the ball. Were it not for the strong options in the centre of the park, you suspect Atkinson might have proven useful as an attacking central midfielder.

Ultimately, as the end of the season approached and everyone was fit again, Atkinson was back to the bench. Like Zavon Hines, the victim of the return to form of Kyel Reid and significant second half season improvement of Garry Thompson. Atkinson played in the play off semi final first leg against Burton due to Reid not being fit to start; but for both the second leg and the Wembley final he was on the bench, coming on as sub each time.

Therein lies the conundrum for both player and club. A step up to a higher level and arrival of a Mark Yeates – a winger who it is said can play in the centre of midfield if required – would suggest fewer opportunities for Atkinson. After a stuttering start to his career, one that appeared to finally get going in 2012/13, could Atkinson afford the backwards step of a season on the bench or in the reserves? He is certainly good enough to play week in week out for a top half League Two team.

Yet for the club, you suspect he will be missed. Not in an obvious manner where we supporters will pine for him, but in the sense that, when injuries and suspensions occur, Parkinson could have slotted Atkinson in and being confident of him doing an excellent job – and he can play a variety of positions. For purely selfish reasons, keeping Atkinson made a lot of sense, but evidently Parkinson – who has shown such faith in him – is more compassionate to the wellbeing of Atkinson than to do that.

So Atkinson leaves and, like Duke and Hines, leaves with both supporters and player treasuring fond memories and a mutual respect. Hopefully last season will prove the springboard to Atkinson enjoying a successful career. If he keeps displaying the work rate and will to win evidenced routinely at Valley Parade over the past 12 months, that success will be assured.