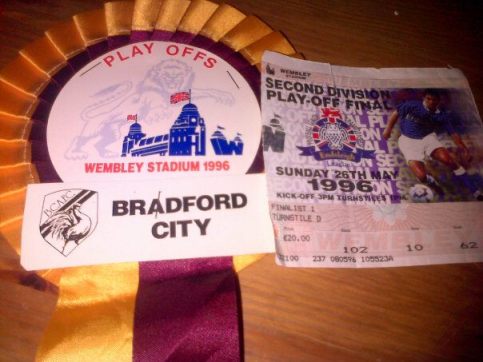 “There’s only one Chris Kamara!”, was our anthem of choice on 26th May 1996 as we earnt our first promotion in 11 years. The venue was the old Wembley stadium, it was the first time that we had played there in our 93-year history and we were in no doubt about who was to thank for our achievement.

Chris Kamara is still one of my favourite City managers. I struggle to separate him and Paul Jewell when trying to decide which former incumbent of the Valley Parade hotseat I love the most. The reasons why any City fan would hold Jewell in such high regard are obvious – he gave us our finest hour and our most successful City team of the modern era – but why do I look back on the Kamara years with such fondness? Maybe it’s because he was the manager when my trips to Valley Parade went from being of the sporadic variety to being more regular, or maybe there is more to it than that.

Kamara was brought to City first of all as a player by Lennie Lawrence in the summer of 1994. A journeyman midfielder, he was now in the twilight of his career at the age of 36 and had just been released on a free transfer after spending a year at Sheffield United.

Kamara was well known to City supporters after spending time with neighbours Leeds United just four years earlier, and his reputation as a midfield hardman somewhat preceded him. He was a famous name to football supporters around the country, having been the first English player to be convicted of assault for an on-the-pitch incident when his punch broke the cheekbone of Jim Melrose in 1988.

His impact at City was felt immediately, as Lawrence pushed him straight into the starting line up at the expense of fans’ favourite and future captain Lee Duxbury. A year and a half progressed with Kamara playing an in and out role in the side, during which time Duxbury was sold to rivals Huddersfield Town (Kamara eventually re-signed him), before Lawrence was eventually sacked in November 1995 and Kammy got his first taste of management, firstly on a caretaker basis before the arrangement was made permanent.

He made a non-descript start to life in the role, as City hovered around lower midtable. And it was a little bit of a surprise when Geoffrey Richmond gave him the job on a full time basis. Kamara himself was philosophical when describing the process of him getting the City job. In an interview with Four Four Two magazine in December 2010 he described how Richmond made him give up his playing responsibilities in order to concentrate fully on management “because its easier to sack managers than it is to sack players”.

Whatever the reasons, it had the desired effects as City won nine out of their last 13 games from the middle of March to cement a play off spot and set up arguably Kammy’s finest hour. Everyone knows what happened next because it has gone down in City folklore.

Kamara’s role in the play off second leg turnaround against Blackpool at Bloomfield Road cannot be underestimated. The story goes that he was so incensed at The Seasiders’ apparent arrogance after their 2-0 victory in the first leg that he used the dressing room wall to pin up pages from the second leg programme where they issued travel plans for the final at Wembley. It was a masterclass in motivational technique and in having the desired effect on his players. It also helped him to make a name for himself and of course gave Mr Richmond the platform to make his famous speech about that game just being the beginning of the journey for Bradford City Football Club.

Indeed he was right; Notts County were rolled over at Wembley and City were a second tier club for the first time in six years.

The 1996/97 season provided the expected struggle for us Bantams, with the aim always being to avoid relegation, but it was also exciting times as the sun seemed to be shining on the club and we were embarking on our most successful period in years.

There were numerous memorable games, in particular the opening day victory against Portsmouth (with a goal from Erik Regtop I may add!), the cup win at Everton (who can forget that Chris Waddle goal?) and the 3-3 draw at Huddersfield when Waddle scored direct from a corner and we were 3-0 up after 38 minutes, only to blow the lead and be back level again within three minutes of the restart.

It all boiled down to a final game of the season scenario, where only victory at home to QPR would be enough to secure our status in Division One. Up stepped Tommy Wright with a wonderful freekick and one of my favourite City players of all time, Nigel Pepper, with a brace to leave Kammy charging down the touchline and punching the air in delight.

Pepper had joined City in the February and his goals and all round midfield action displays had made an immediate impact. He was arguably Kamara’s most successful signing, which was some feat considering the range of players that were brought in during that time.

Kamara is well remembered for his penchant for a foray into the European transfer market. The arrival of Regtop was supplemented by the acquisitions of fans’ favourites Marco Sas, Rob Steiner, Ole Bjorn Sundgot and Edinho, amongst others. Of course, not all of these signings were a success and, for every Mark Schwarzer, there was a Robert Zabica. For every George Kulscar, there was a Jari Vanhala or a Sergio Pinto.

Money was also spent in the domestic market too. The club record transfer fee was broken twice in the space of ten months. Firstly on the £550,000 acquisition of Gordon Watson in January 1997, and then £625,000 for John McGinlay in November 1997. City didn’t really reap the benefits from either signing, for entirely different reasons of course.

In only his third game for the club, Watson was the subject of the now infamous “worst tackle in football” as described by Jimmy Hill, and City were robbed of his services for 18 months. The image of Kammy charging onto the pitch to remonstrate at the sickening challenge will never leave me, and by the time that Flash returned to first team action, the manager who had signed him was long gone.

McGinlay was different. He arrived during City’s second season back in the second tier. Rumours were that he was more of a Richmond signing than a Kamara one, and he certainly didn’t live up to the reputation that he had built for himself at Bolton.

That 1997/98 season was to prove to be Kammy’s last at the club. He was surprisingly sacked by Richmond in January 1998 with City sitting in midtable. Rumours were rife as to why the change was made, and he was replaced with his former assistant Jewell.

What was clear was that the relationship between two highly combustible characters in Richmond and Kamara had run its course.

Richmond will always argue that it was the right decision at the time and, when looking at the facts, it is difficult to argue with this view. Jewell took City to the Premier League less than 18 months later, but Kammy always felt that he should have been given more time. City had progressed during his time in charge and he once famously claimed that it was “his team” that got promoted under Jewell.

In actual fact, when looking around the promotion team of 1999, the players were a mixture of Kamara and Jewell signings. Gary Walsh, Darren Moore, John Dreyer, Jamie Lawrence, Peter Beagrie and Robbie Blake were all signed by Kamara. Wayne Jacobs too had been a mainstay of his side, although he had actually been signed by Lennie Lawrence.

When he did leave Valley Parade, Kammy wasn’t out of the game for long before he spent a brief spell in change of Stoke City, a club where he had once played. He was almost tempted back to BD8 in 2003 when Nicky Law left and he was even interviewed for the job, but ultimately decided that he was happy where he was on the Sky Sports’ sofa.

He has of course made a name for himself as one of the most famous and popular pundits in the country, not least for his gaffes and love of joking around. You can see on the television that Kamara hasn’t lost any of his energy and enthusiasm that he had on the pitch or in the dugout.

Say what you want about his eccentricities, one thing is for sure, Kammy’s reign at Valley Parade, was an “unbelievable” ride.