Bantams sign off Ireland tour with another four-goal win 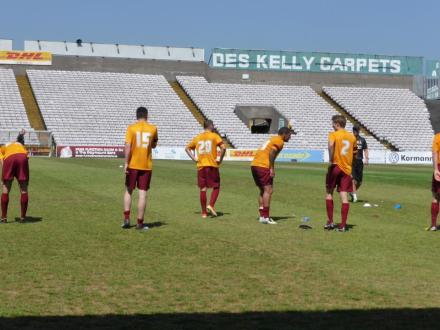 Bradford City ran out easy winners in the Dublin sunshine at Dalymount Park to round off another successful trip to the Emerald Island. Phil Parkinson opted not to play trailists Gary Woods and Raffale De Vita, potentially meaning they have done enough already to secure contracts at Valley Parade for the coming season.

The Bohemians ground was average at best. Behind one goal the stand looked to be condemned and I’m sure health and safety would have a field day carrying out a risk assessment on the old terracing. However, the stewards were very helpful and a friendly bunch.

The major positive for me was seeing Andrew Davies make his pre-season debut and he comfortably came through the first 45 minutes. He did take a knock midway through the half but ran it off and was taken off at half time, which I would assume was a planned change.

Alongside Davies in defence was skipper for the afternoon, Michael Nelson, left back Carl McHugh and playing right back Niall Heaton. In midfield was Jason Kennedy, Jack Stockdill, Kyel Reid and Garry Thompson, leaving Alan Connell and Louis Swain up top.

Bohemians took the lead in controversial style when a corner in front of the main stand was met with a header that barely crossed the line, if at all, before Kennedy cleared. The Bantams levelled fairly quickly through Thompson as he headed home from a brilliant Kennedy corner. Soon after Swain hit the bar with a tidy effort from the edge of the box before the Admiral Nelson rose like a salmon on the stroke of half time to head City in front from yet another Kennedy corner.

In the second half Swain quickly added a third just a couple of minutes in. Now I must confess that, if you want a reliable account of the goal I’d be looking at Simon Parker’s T&A report as at time I was chatting to fellow WOAP writer Damien Wilkinson his brother Kieran, and friend Rushy over a nice pint of Guinness.

A host of changes later followed in the half, with the likes of Rory McArdle, Stephen Darby, Gary Jones, Nathan Doyle, Mark Yeates, James Hanson and Nahki Wells all entering the fray. And, just like at Athlone and Guiseley, Nahki got himself on the scoresheet to round off the scoring with City’s fourth of the afternoon.

There were some excellent performances by City. The likes of Kennedy in particular stood out and it will be interesting to see who Parkinson goes with out of the trio of Jones, Doyle and Kennedy. Young midfielder Jack Stockdill really shone for me. The kid looked comfortable on the ball and appears to have real potential. Not ready yet for first team football in my opinion, but he’s a player that could make the grade in the next couple of years.

Despite getting on the scoresheet I think this season will be too soon for Swain, I wouldn’t like to think we were needing him for the League One campaign. Again, he’s got potential and would probably benefit from a spell out on loan to gain valuable first team experience. It will be interesting to see his progress over the next year or so.

As day turned to night City fans in good numbers were out in Temple Bar with numerous renditions of “Oh Rory McArdle” being sung loud and proud amongst others from the City song book. A great trip for both the club and the fans. I’ll certainly be back next summer if the Bantams return for a third visit…