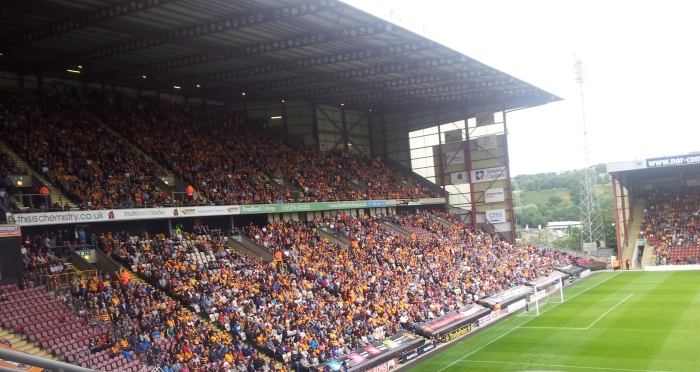 Envy is not only one of the seven deadly sins, it is an unattractive emotion to feel. Back in April 2005, Hull City came to Valley Parade for a League One clash bringing with them one of the largest away followings BD8 had seen in years. I remember feeling hugely jealous not so much because the Tigers’ 2-0 win placed them on the verge of a second successive promotion, but for how much fun their joyous supporters were clearly having. Whilst we were adapting to mundaneness of League One midtable and the post-administration two reality of austerity, Hull’s Valley Parade triumph was just the latest of a series of memorable afternoons for a club that had gone through its own dark days and was now firmly on the up.

Filing out of Huddersfield Town’s away end last Tuesday and when leaving Valley Parade on Saturday, I was reminded of that feeling of envy. Only this time, we are the ones that others will be looking at through green eyes. This time, we are the ones having all the fun. Lots and lots of it. In fact, I’m not sure I’ve ever taken as much enjoyment from watching the Bantams as I have over the last 13 months.

Part of the elation stems from the sense of perspective which 12 years of misery and gloom provided us. The financial woes, the relegations, the lame home defeats, Jason Gavin. But although it may be early days in this season, the three hugely enjoyable match day experiences I have been part of have provided me with a buzz from believing that last season’s heroics were not so much a closing of that painful chapter in the club’s history, but merely the beginnings of something special. In the back of my mind was a fear that 2012/13 would be a one-off, but it’s continuing. This feels business as usual.

So like Hull in 2005, or Swansea in 2006, we are on that exciting journey of smashing through previously unassailable glass ceilings and surprising ourselves and others with our capabilities, along the way chalking up memorable victories that are treasured for years. It might not be a journey that concludes with a place in the Premier League like it has for Hull and Swansea, but wherever our path takes us on, we have not yet reached our destination either. Knowing we are moving forwards and can continue to go higher fills me with great excitement and relish about the months and – hopefully – years ahead.

Of course we have previous of this. 1995 to 2000 was one of unprecedented progress for Bradford City, and the memories it provided us with are still recalled on a regular basis. Blackpool, Notts County, Charlton, QPR, Wolves, Middlesbrough and Liverpool. Beyond those obvious examples are so many other incredible afternoons and evenings. Along the way we built a collection of heroes who will never need to buy a drink in Bradford for as long as they live.

I like the idea that we have are in the middle of something similar. The outstanding 4-0 thrashing of Carlisle United on Saturday might be one we should avoid getting carried away with. But then again, why can’t we get carried away for a few moments at least? It was a bloody amazing 90-minute performance from the players. The only guy you could suggest wasn’t on top of his game was Jon McLaughlin – but that was only because City’s keeper had virtually nothing to do. All 10 outfield players were superb, and the way that they linked up filled me with admiration and pride.

First and foremost, football supporting is about players. We probably spend more time talking about the manager and attributing the praise or blame his way, but we pay our money to watch footballers play football. They give us the reasons to cheer and the reasons to moan.

Thinking back to the 2004/05 vintage – or any City team between 2000/01 and 2011/12 for that matter – what was often frustrating was fully knowing, at the time, how largely forgettable most of the players who represented us were going to prove to be. With some very worthy exceptions, it was a sea of ordinariness in claret and amber. At times these players brought enjoyment but rarely enthrallment. Their weakenesses – collectively and individually – too often outweighed their strengths.

This team – these players – have already put their names in the history books of Bradford City. We are going to talk them for the next 30, 40, 50 years. And what makes the present so wonderful is that they are still with us, performing week in week out in front of us. They are, in a very real sense, celebrities. Our Harlem Globetrotters. They have an aura about them that provides a shield from the usual message board culture of talking them down.

They will hopefully grow old gracefully with us; then be respectfully moved on before they start showing themselves up or pissing on their legacy. Others will eventually go onto bigger things, with our best wishes. In the meantime, the players that we will one day be boring our grandchildren talking about are still playing for us, providing us with new tales. That makes me smile every time I watch them.

The question is where they rank amongst the club’s century-plus history of heroes? Nahki Wells and James Hanson are clearly the best striking partnership City have had since Lee Mills and Robbie Blake, but you couldn’t make a case for suggesting they are better players? Could you? On Saturday in the Sparrow before the match, a friend told me that he was debating his all-time City XI from some 50 years following the club, and he couldn’t decide whether to select Wayne Jacobs or James Meredith as his left back. I guess that illustrates the standing of the current crop.

For a club like Bradford City, with a history of moving up and down divisions, comparing different generations of players like-for-like can be difficult. David Hopkin was evidently a better player than Gary Jones because he played for us in the Premier League, but when it comes to earning a place in our hearts there is no contest. It might be hard to make a case that this City side is one of the club’s greatest, but in terms of achievement and affection it really does belong up there with the best.

The other side of this period of progress is the atmosphere amongst supporters. Bristol City last week was special, Huddersfield last Tuesday memorable, but Carlisle at Valley Parade topped the lot for me. On so many occasions in recent years, our home games have been played out in library-esqe silences. We’d only get vocal in disapproval. On Saturday there was non-stop chanting and backing for the players. It might be easy to be like this when the players were strolling to a comprehensive win, but such home atmospheres have become the norm since the final few months of last season, in victory and defeat.

Norm being the key. Saturday’s 4-0 thrashing wasn’t special simply because we played wonderful football and made a right old racket in appreciation, it was special because we’re getting used to watching wonderful football and making a right old racket. The feel good factor that emanated from last season’s incredible cup run hasn’t faded, it’s still there and it remains just as strong.

I love this. I love this club. I love this manager. I love these players. I love – for the most part – our fans. And I’m so excited about the wonderful memories we have experienced and am looking forward to the great moments we are yet to go through. I don’t really know who is driving this bus, but I sure as hell do not want to get off.