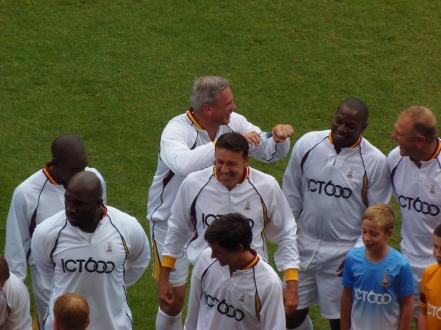 14 years is a long time in anyone’s life. Yet the invitation to step back in time and watch the 1998/99 promotion winners perform in a special match for Wayne Jacobs’ One in a Million charity brought back memories that seemed reassuringly fresh.

Aside from an absent-without-sicknote Robbie Blake, all that was missing was a half-demolished Kop terrace, a pac-a-mac to keep out the elements and a car for Stuart McCall to fall off. The heroes we have immortalised for so many years were back in the flesh, strutting their stuff on the turf that turned them into legends. Beagrie passes to McCall, McCall to Lawrence, Lawrence to Mills. It was re-visiting a time of incredible highs – highs that have been stored in the mind and treasured ever since the final whistle was blown at Molineux on Sunday 9 May, 1999.

Sure, our heroes had not aged in the way that we have preserved them in our minds. Lee Mills has grey hair and a belly. That was unsettling to see. He wasn’t the only one who hasn’t been able to cheat time and retain an athletic body. You could see some of them wheezing for breath. The game’s rolling sub feature was essential for giving people breaks and getting through three periods of 30-minute action.

But that ageing process was reflected in the stands, too. 14 years have changed all of us in different ways. I was a 17-year-old that season, in the first year of sixth form and holding down two part-time jobs in order to afford to watch my heroes. University made a man of me but also gave me a beer belly. Marriage, mortgage, kid. Life has completely changed, but there has always been at least one constant: supporting City. 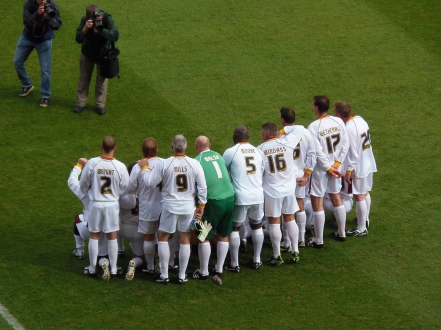 And so when on Sunday morning I put on my replica 98/99 claret and amber shirt for the first time in years, to wear to the game, I felt a mixture of relief that it somehow still fit and silliness for re-living my youth by dressing like I was still that 17-year-old. But the 1997-2000 era following City was such an important part of my life, and in many ways I feel as though I’ve never stopped re-living it.

I’m sure I’m not the only one. As I met my friends in the McCall suite before kick off, fellow WOAP writer Gareth Walker told me that he ranks the 1998/99 season up there with the best moments of his life, alongside marriage and the birth of his son. For all of us, these types of monumental events are recalled annually through anniversaries and birthdays. No one treats May 9 the same way – maybe we should start buying each other claret and amber presents? For sure, a communal day devoted to that magical period felt long overdue. 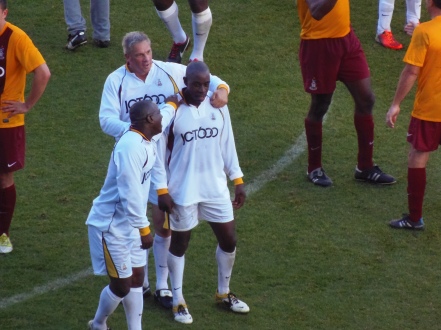 The two teams – Class of 99 and Celebs – were presented before kick off, the absence of Blake prompting great disappointment that took a few minutes to shake off – it was later revealed he had a family emergency. But still. Walsh, Wright, Moore, Dreyer, Jacobs, Lawrence, Whalley, McCall, Beagrie, Mills and Windass are on the pitch and it’s a sight that triggers goosebumps.

Sadly, Wright and Whalley are not fit to play and are taken off after a minute having at least had the privilege of playing at Valley Parade one last time. They are replaced by Gordon Watson, with Windass dropping into midfield, and David Wetherall, who slots in at right back. Wetherall was signed the summer after, so technically should not be in the 1998/99 side. No one needs me to point out this continuity error. We all know the history. We witnessed it first-hand. 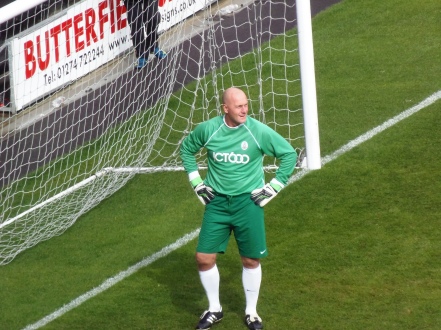 The game itself was like these types of matches invariably are. Hardly a gripping spectacle and lacking pace and drama, but pleasant nonetheless. The players have still got it. Mills, despite his out-of-shape look, is brilliant on the ball. McCall – who also looks chunkier than before – can still pick a pass. Of our heroes, Lawrence remains the closest resemblance to a professional footballer in terms of physical appearance and pace.

Just like the old days, Beagrie is the star of the show. His skillful dribbling and drop-of-the-shoulder-change-of-direction trick makes you feel like the past 14 years never happened. After one jinxing run where he leaves the full back in his wake, Beagrie crosses for Mills to fire home. Beagrie to Mills – goal. Beagrie to Mills – goal. This is happening again. Grown men weep. 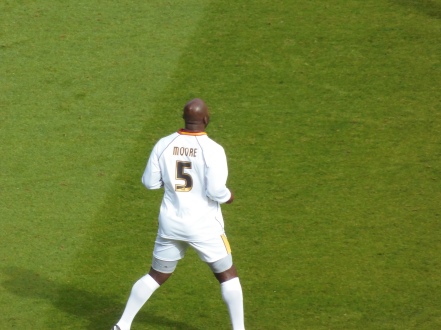 The Celebs hold their own well and equalise through Andy Ritchie. It’s a good game to watch with Walsh making some excellent saves and Moore and Dreyer a force at the back. Celebs go 2-1 up through former youth City player Louis Horne and the gentle kick-about gets more intense. Dreyer drills home for 2-2 and later on Mills crosses for a City supporter, who bidded to play in this game, to tap home. Oh to have been that supporter at that moment. Meeting a cross from Mills and scoring in front of the Kop. However much he paid for that privilege, he got a bargain.

The Celebs rally to win 4-3 – the winner a superb hit by another former youth player Danny Forrest – but no one cares of course. Not after spending an afternoon re-living the class of Watson and Windass. Of Beagrie’s tricks and Mills’ vision. Of Lawrence’s energy and McCall’s authority. Paul Jewell patrols the dugout, no doubt feeling renewed pride in what he constructed 14 years ago. Jacobs – the man who organised this event – gets the biggest cheer of the day. 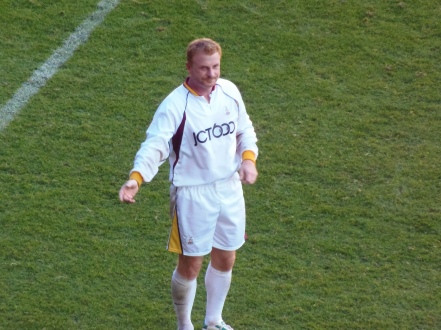 Nostalgia is a funny emotion that has been commercialised in recent years. TV shows celebrating events of just a few years ago, DVD box-sets of TV shows we enjoyed as a child, 70s, 80s and 90s bars. You enjoy them for the sense of novelty they provide, rather than because they have any great meaning in your life.

Yet Sunday’s nostalgia fest mattered so much. It mattered first and foremost because a lot of money was raised for a wonderful cause. But it mattered also because 14 years ago a group of 20 or so people achieved something so special that it is still treasured by thousands of people today. And though life moves on and – finally – in the 2012/13 squad we have a group of players to rival the affection held for the class of 99, it was fantastic to be able to take the afternoon out to feel young again and to demonstrate to our heroes what an imprint their heroics had on people’s lives – and how much they still mean to us. 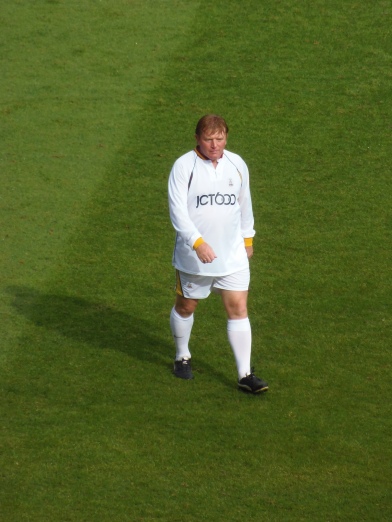 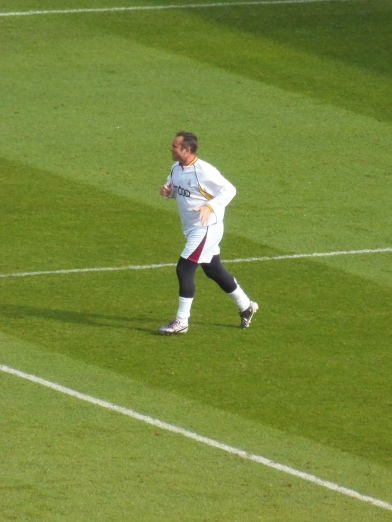 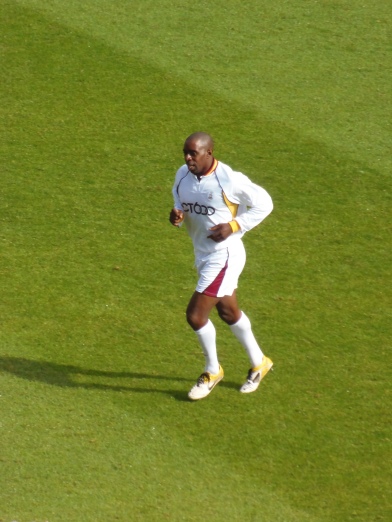