Home › Opinion › So far, so hugely promising (part one)

So far, so hugely promising (part one) 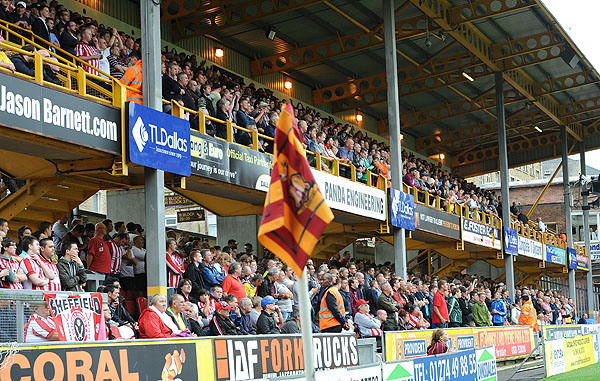 There is so much encouragement to take from Bradford City’s adaption back into League One. The landscape of England’s third tier has undoubtedly changed considerably during our six-year exile in the basement division, but the return is so far proving to be seamless.

A fixture list that – prior to a ball being kicked – appeared to offer some daunting early season tests has been negotiated with just the one league defeat. Holding a play off spot at this stage of the season might be largely meaningless, yet there are 19 teams sat below us who would gladly swap places. 19 teams who, as recently as last May, the Bantams stood underneath in the football ladder.

In many ways, it doesn’t yet feel serious. The decline of the club, from an improbable Premier League highpoint in 2000, has seen a near-constant level of pressure around results that have encouraged pessimism when things have not gone well and mere relief when they have. Even last season, when we were having so much fun, there was a constant expectation that we should be doing more in the league. Now, for the first time in years, Bradford City are comfortably exceeding the expectations of most supporters. There is so little to grumble about, as tranquillity and positivity reigns.

It looked worrying for half an hour at Aston Gate on the opening day, as recently-relegated Bristol City blew the Bantams away with a strong first half performance that left us battling just to stay in the contest. But we recovered impressively that afternoon and have not looked troubled ever since. Dropped points at Stevenage, Port Vale and at home to Colchester owed more to City falling below high standards than they did opposition brilliance. We can hold our own, we have retained that resilience, and settled in to life in League One with relative comfortableness.

And when we have been on top form, opposition sides have struggled to live with us. The 4-0 thrashing inflicted upon Carlisle United, to kick off the home league campaign, flattered only the Cumbrians. Brentford – hotly tipped to be amongst the promotion contenders – went by the same scoreline, City’s cause that day aided by a deserved Bees’ red card. The high watermark of the season so far was arguably the 2-0 defeat of Sheffield United on August bank holiday weekend. An 18,000+ crowd, incredible atmosphere and superb contest settled by Nahki Wells’ clinical finishing. Valley Parade purred with satisfaction.

Wells has undoubtedly been the star of the show so far. The potential of a big money move away might have been a motivating factor, but the Bermudian  has never looked more confident in his own ability. He has displayed an impressive improvement in all round intelligence, and seems to know exactly what he needs to do to succeed. Eight goals in nine league matches is a stunning reward. James Hanson is vital to Wells’ game and has also adapted to the step up to League One with reassuring ease. Any would-be Wells suitors might be wise to consider buying them both as a package.

Not that we want to encourage either’s departure. Prior to the season’s start, the importance of Wells and Hanson was obvious, but it has been highlighted even more by their outstanding form and the lack of alternative options. Andy Gray’s false start of getting injured in pre-season means he can be excused for now, but there remain significant doubts over whether he or Alan Connell could make the step-up if needed. The arrival of Celeb Folan on a three-month deal is significant and he has a good pedigree; but still, a long-term injury to either Wells or Hanson has the potential to seriously derail City’s season.

At least in defence, there is greater depth and fiercer competition for places. Andrew Davies – who it was widely felt was playing well below his natural level in League Two – still looks too good for his surroundings. His ongoing commitment to City – when there would surely be a queue of interested clubs in the Championship were he have wanted to leave – is something to cherish. Carry on the season in the manner as he has started – as he surely will – and Davies’ status amongst supporters could easily be elevated to one of our all-time greatest centre backs.

Rory McArdle has continued to partner Davies, despite the occasional slip up. He will be pushed by Luke Oliver, who made a remarkably calm return to the side after 11 months out when he stood in for the Irishman against Brentford. Matt Taylor – a summer signing from Charlton – would have been expected to break into the team ahead of Oliver. Taylor made a poor start against Huddersfield and has been quickly loaned out to get first team football.

Indeed, Taylor’s difficult adaption to life at Valley Parade is echoed by other summer arrivals. Only Mark Yeates has made a notable impression, but even the former Watford winger has found himself benched in recent weeks due to the resurgence in form of Kyel Reid. Whether Phil Parkinson has improved the squad during the summer is yet to be determined, as the likes of Rafa De Vita and Connor Ripley await first league starts. The lack of even bench time for Jason Kennedy is surprising. In pre-season he looked like the heir apparent to Gary Jones, though the outstanding form of Jones and Nathan Doyle makes it impossible for Parkinson to break the pair up.

Nevertheless, the strength of the squad remains a concern. The treatment room has so far proven to be a quiet place, but that will inevitably change as winter draws closer and the games come that little bit think and faster. Last season the squad was tested to its limit on occasions, but displayed commendable resilience. It will be interesting to see if that can be repeated this time around, with the two cup defeats – where Parkinson brought in fringe players – not the most promising of indicators.

The other question is whether the start to the season has been easier than we might have assumed. So far, City have faced only one side in League One’s current top 10 and three of the bottom six clubs. Bristol City and Sheffield United looked tough fixtures on paper, but their respective starts to the season suggest that bigger tests lie elsewhere. Certainly the October fixtures against Walsall, Preston and Wolves will offer a greater measurement of where City are.

It still seems too early to make conclusive judgements about what the Bantams can achieve this season. Even relegation cannot yet be ruled out, as highly improbable as that seems, given how our last season in League One (2006/07) saw a fine first two months to the campaign ultimately result in a drop to League Two. Circumstances are completely different this time around, and the club is in a much healthier position. But still, getting to the 50-point mark as quickly as possible has to remain the initial objective.

These are undoubtedly exciting times to be a City fan. Right now, there is an almost care-free existence of enjoying the moment and not getting too bogged down with what it all means. Carry on as we are up to Christmas, and the words ‘Championship football’ might change from a long-term aspiration to an immediate aim. Whatever the speed of progress, the most important factor is that we are making progress.

The future looks bright, because the present is proving to be so exhilarating.

Like Loading...
‹ Where there’s no Wells there’s still a way
Mark Yeates fills the Plan B hole ›