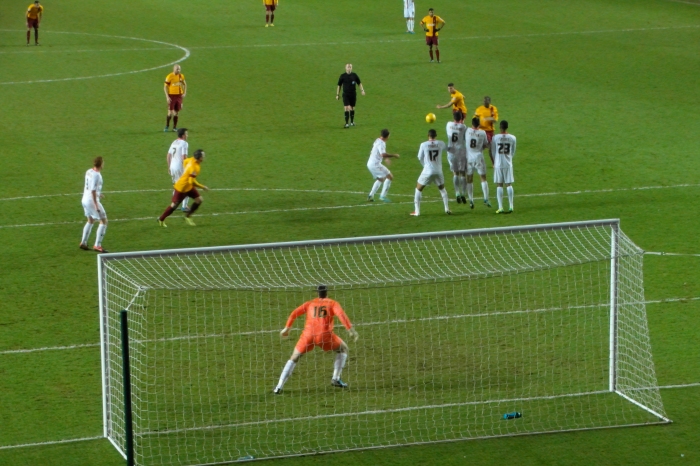 Dagenham & Redbridge striker Rhys Murphy is top scorer in League Two at the minute, with eight goals. Following this weekend’s results, there are ten League One forwards who can better that tally. With a broad mix of pace and power and experience and youth, this year’s collection of third tier strikers could be on their way to something very special indeed.

Obviously our man Nahki Wells will feature prominently here; Saturday’s poacher’s finish to open the scoring at stadium:MK lifting his tally to twelve in the league for the season. We also saw another one of this season’s stars on target for the home side, Chelsea startlet Patrick Bamford, who bagged his eleventh in fifteen starts.

For those who didn’t make the trip down to Milton Keynes, Bamford is in essence a far, far more cultured version of James Hanson, and he’s only 20 years old. This season is quite clearly the lowest level of football the England under-21 international will ever play at. His movement and balance immediately stood out, and this was ignoring how wonderfully he played with the ball at his feet. Chelsea assign mentors to their loanees, usually former players, and Bamford’s is Tore Andre Flo. Off the limited sample size I’ve seen so far, the Scandinavian former Chelsea forward I’d compare him to would be an early-day Eidur Gudjohnsen.

Nahki Wells had one of his least effective games of the season on Saturday. For the vast majority of the contest the impressive MK Dons backline kept him and James Hanson as close to under control as anyone has managed this year. But they still couldn’t keep the Bermudian off the scoresheet as Wells found himself inexplicably unmarked six yards out after a delayed free kick in from the right flank. City make their hay from reorganisation at set pieces, the chaos is their friend.

Chaos is no acquaintance to Bamford, or his MK Dons team. Manager Karl Robinson may have been one-eyed in his view of the referee after the game, but he was right in his assessment of the play. His team should have won that game, but they couldn’t turn their territorial dominance into clear cut chances. The two goals they did score came from a counter attack and a penalty. Individual mistakes and a lack of urgency in the final third doomed them.

Not for the lack of effort or quality from Bamford though. Dropping off into the gap between the midfield and the defence he was a persistent thorn in City’s side, and showed his clinical air in front of goal to equalise midway through the first half.

Wells and Bamford headline the forwards in this division alongside Callum Wilson, whose pace and power will undoubtedly still be haunting Matthew Bates and company. All three seem more than capable of playing in the Championship, and at this point there is nothing to indicate they can’t go higher. Equally young forwards Jay Emmanuel-Thomas and Leigh Griffiths have already proven this, and are this season both artificially below their level. A Jay Emmanuel-Thomas with his head screwed on is a Premier League talent. Hell, he’d still probably start for Palace now.

At the other end of the spectrum we have Ryan Lowe and Kevin Lisbie. Both swiftly en route to their 36th birthday, their Indian Summers leading their sides to safety and promotion respectively.

Last year in this division, only Paddy Madden made it over the 20 goal mark, the widely heralded rubicon of great strikerdom. But going back over the years, it is common to get three or four. At the minute we are on for eleven.

Even the golden era of League One forwards between 2008-2010, headlined by Rickie Lambert and Jermaine Beckford, we never saw more than six players hit the twenty goal mark. With this year’s infusion of young talent, and high-priced stars from the division above, the numbers could be stratospheric.

Those season projection numbers in the table above adds together goals already scored with an extrapolation of the goals per game over the remainder of the season. Now clearly not everyone in this list with continue this prolific rate of scoring, a regression to the mean will surely hit some (Ryan Lowe scored a third of his goals this weekend for instance), but we aren’t even including Clayton Donaldson or Peterborough’s one million pound man Britt Assombalonga, currently placed in eleventh and twelfth respectively. Nor Republic of Ireland international Kevin Doyle, Dany N’Guessan, Craig Westcarr or either of the guys at Rotherham. (A betting man would assume a number of these players would be in this list by May.)

Obviously this has and will continue to be aided by a host of poor defences this season. Sixty goals conceded in a season is a mediocre number, and as it stands, sixteen of the twenty four defences are on pace to smash through that barrier. And of those eight decent defences left, one of them is Bradford City, who have spent the last month making goal concession an art form.

This perfect storm of talent, means and opportunity may be leading to something special. It’s almost the end of November and we have six men on for thirty or more goals. You can only say that about one other man in England at the minute: Leeds striker Ross McCormack. And this is with Bamford, Wilson and Wells who may not have begun to tap into their true abilities yet.

Nahki Wells is the standout in this list; he is an exception amongst exceptions with a goal scoring efficiency without peers. If you extrapolate his numbers over a full 46 game season, he’d be on for 42 goals. Those are Messian numbers. A better comparison may be the man who blossomed down the A641, Jordan Rhodes. Different players in styles, but born goalscorers. And as Mark Lawn and the bald, cat stroking maniac sat behind the SISU boardroom table will tell you, a young goalscorer may be the most saleable asset in football.

With so many sides struggling down the bottom of the Premier League, and battling for promotion from the division above, the auction is on. And it only takes one to break the bank.

In Nahki Wells, City have one of the best strikers in the division, and by most metrics, the best. In the past couple of weeks we have seen a couple of the challengers to his title belt, and the Bermudian has for the most part seen them off.

As we enter the Christmas month, Mooney, Lisbie, Assombalonga and a number of other contenders are waiting in the wings to take their shot, but until they do the King will stay the King. And after four goals in six days, Wells may only just be getting started.

Like Loading...
‹ Back to winning ways after City edge Dons thriller
More of the same as Notts County come to town ›