Home › Match Reviews › The In Crowd 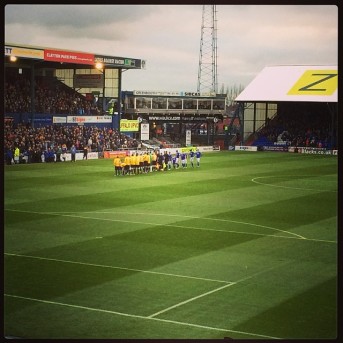 The scale of the challenge has suddenly hit home. If Bradford City are going to achieve the stated objective of finishing in the play off positions this season, there are surprisingly high number of challengers who they will need to better over the full 46 games. Oldham today were fantastic, Oldham today gave the Bantams a really tough examination, yet Oldham today stand in the relatively lowly depths of 14th.

On this evidence, Oldham must surely be play off contenders also. James Wesolowski was as good a number four as you will see in League One. Sidney Schmeltz gave the excellent Stephen Darby a challenging afternoon. The movement of the goalscorer, Jonson Clarke-Harris, caused both central defenders numerous problems. Centre back James Tarkowski stood up to the unwavering threat of James Hanson. In front of him, his Latics team-mates played some of the best football I’ve seen this season.

But we come back to that stat: 14th. Seven points behind City, who this weekend have dropped two places.

The top five looks a cut above the rest; so there is arguably just one play off spot up for grabs and probably 10 challengers fighting for that place. There could be more. Perhaps the summer elevation from the depths of League Two provides us with a distorted perspective, but to me this season’s League One appears extremely strong with a number of high quality teams. It is almost an honour simply to be in this company. To be part of this crowd.

And as long as City keep playing in this manner, I will be happy. We can pick holes in the performance today for sure. Once more there was a shakiness to the back four, and in the final third the decision making could be better. But for endeavour and commitment, I continue to admire this group of players and the brutal honesty of their displays. Nothing is left in reserve, and you can’t ask for more than 100%.

It was a deserved draw following an engrossing 90 minutes. Oldham shaded the first half, but City had more of the play in the second. Both teams created plenty of opportunities, but both goalkeepers will have much busier days at the office. It was competitive to the final kick, summing up the division beautifully.

The greater incident occurred during the opening 45. Both sides had wonderful chances to take the lead early doors, with Nahki Wells’ shot hitting the underside of the crossbar and bouncing agonisingly on the line, before Nathan Doyle was robbed of possession and Jon McLaughlin made a superb one-on-one block as Corey Smith attempted to take the ball around him. Then came a quick exchange of goals, which suggested many more were to follow.

First, Wells was on hand to clinically fired Garry Thompson’s superb low cross into the roof of the net. It was Wells doing what Wells does best, and we should continue to proudly celebrate his outstanding run of form. That’s 13 goals in 15 league matches this season. That’s 22 goals in his last 25 appearances, including the back end of last season. Phenomenal stuff. In my time supporting Bradford City, I have never seen a striker as prolific as this.

Nahki was the best player on the pitch today. He is the best striker in the division, end of.

Two minutes later, Clarke-Harris smashed home a powerful shot from the edge of the area that beat McLauglin at his near post. Questions posed of the City keeper perhaps, but it was a fantastic strike and, besides, the Scot’s excellent save at 0-0 should be used to counter any significant grumbles over the equaliser. Without that intervention, City fall behind and today could have been a very different story.

Oldham bossed the final 20 minutes of the half, yet City had the clearest opportunity when a Kyel Reid charge into the box was seemingly ended illegally by Tarkowski. Width of a Post was able to call upon a pair of eyes at the opposite end of the pitch from us away fans, who returned the verdict of “stonewall penalty”. Reid was presumably considered to have dived but was not booked by the erratic referee, David Webb. A far less convincing Reid tumble in the second half did see the tricky winger rightfully booked.

City improved after the break and pinned Oldham back for a spell. What a driving force Gary Jones continues to be, and his battle with Wesolowski was a true heavyweight clash that demanded your constant attention. Doyle was his typically excellent self alongside Jones, and Wells and Hanson linked up well as usual. Thompson – criticised heavily of late – was undoubtedly trying hard, but seems to lack the confidence to pull off things that he was doing with his eyes closed last season. One would hope the assist for Wells’ goal would have boosted his self-esteem, but at times Thompson still played like a man resigned to his fate of being replaced with Mark Yeates in the second half.

Oldham manager Lee Johnson made all of his subs relatively early, and they had the effect of providing his side momentum to step things up in the latter stages. City defended very well in the second half, with James Meredith’s revival continuing, Rory McArdle solid and even Reid throwing himself into some challenges. The threat of a late Oldham winner hung in the air until the end, but City could not be discounted from nicking it either – despite Wells’ first half goal being their only shot on target.

Yet as the clock ticked down and you pondered where a winner could come from, it was difficult to see what Phil Parkinson could do to aid it beyond the obvious change of Yeates for Thompson (which came after 78 minutes). Partly this was due to the superb level of efforts from the City players on the pitch – no-one deserved the hook – but partly also because of the lack of credible options on the bench. Whilst Johnson had the power to influence his team’s performance by his substitutions, birthday boy Parkinson did not.

It is becoming increasingly clear that City lack strength in depth. Oli McBurnie made his league debut in stoppage time, but you do worry about the level of expectation placed upon his young shoulders by some supporters. McBurnie and Alan Connell aside, Parkinson’s bench was filled with summer signings who either can’t dislodge the established heroes of last season or have not proven themselves to be good enough. It increasingly seems as though the close season transfer business has not worked out as hoped; which leaves the manager with more headaches than he’d have anticipated.

Still, thank goodness we can continue to rely upon the 2012/13 vintage. Despite a fifth draw in seven league matches, the Bantams can retain comfort from the fact that only Wolves, so far, have looked a class above them. In this most competitive of divisions, City’s promotion heroes can compete. They might not be good enough to end up on top of that 10-club pile vying for the last play off position, but at least we know we are in for an exciting second half to the season watching them try.

Like Loading...
‹ A big month for City begins with trip to Oldham
James Hanson enters ‘The Conversation’ ›