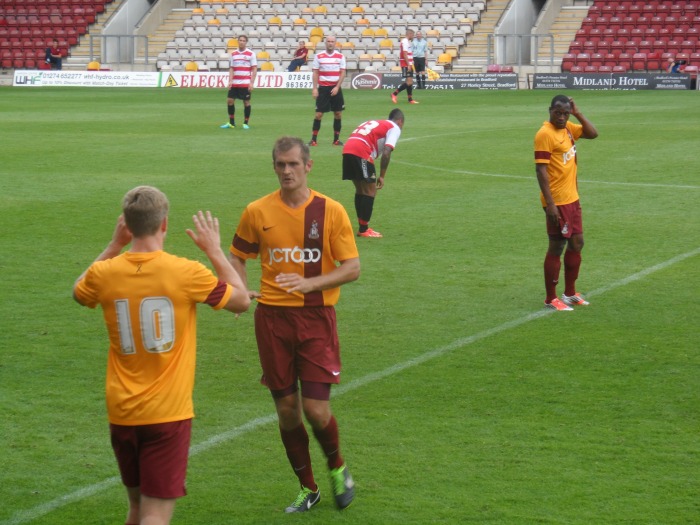 November 2013 was a touch disappointing on its face, and in the whole scheme of things, largely forgettable. It was most notable for its final week which saw City’s Number Nine re-up for another four years. As a result of that deal, the Bradford-born, Beckfoot Alumnus ‘Big’ Jim Hanson has given himself a real chance to enter the pantheon.

James Hanson is my guy. I’m repeatedly on record advocating as much. He’s a good footballer and I’m desperate for him to succeed. This is a fact which differentiates him from Nathan Doyle (another of my guys) who I merely want to succeed.

Hanson has signed on until 2017 and in doing so becoming one of the highest paid players at the club. This is a status which no one can dispute, given his form over the last year. Nahki Wells may well get the goals and the glory, but here in lies the distinction of ‘cult’. ‘Cult’ Heroes can’t really be the best player; they are heroes in their own right, I suppose. Hanson is well on his way to Cult Hero status. He may have already arrived.

Hanson is the elder statesman of this team, this much is abundantly clear. He, along with Jon McLaughlin, are the only starters which Phil Parkinson retained after he took over. (Luke Oliver would be a third if he stayed injury-free.) Hanson is unique in that he has never really had a time out of the team. He came into a rebuilding side fraught with injuries up top, and despite the frequent changes of manager and revolving door of support acts, no manager has seen Hanson and not immediately built his team around him.

His competitive advantage is high; his ceiling might be higher still.

A quick aside, a worrying conclusion from this table is that after Nahki Wells’ ever-more-glaring January exit, the 2nd highest scorer in the squad will likely be Kyel Reid* whose comedic profligacy in front of goal, whilst endearing, isn’t especially effective. The club will obviously replace Wells with someone, but still.

(*I’m refusing to acknowledge Andy Gray 2.0 until given reason to the contrary.)

The player of my generation has probably been Dean Windass. I saw Stuart McCall, but I didn’t see “Stuart McCall”, you know?  Outside of that spell, there’s been a vacancy of cult heroism since Wayne Jacobs retired. Omar Daley was fun, but…no. Luke O’Brien is probably next on the list. (Looking back, I have to question why David Wetherall wasn’t that guy, but for whatever reason, he definitely wasn’t at the time.)

As of today, there’s a better than decent chance James Hanson is going to be “my guy’. What’s more, apart from #1 post-Millennium cult hero, James Hanson has a shot at something more historically significant. He’s got a shot at being “the” guy.

Last Friday saw him sign a four-year extension at the club, in what will likely be his career contract. His next contract in 2017 will in all likelihood be smaller; these are his peak years coming up.

Maybe I’ve been naive or parochial but I always assumed he’d leave in the summer, that he’d be too good for us and earn more on the open market. I’ve put a higher-than-average desire on promotion this year because I assumed the strikers would both leave. Now there is a future beyond this season. The side will have to adapt to the loss of Nahki Wells, likely soon, but in Hanson they have some continuity in playing style moving forward, dark as that may be.

If Nahki Wells signed a contract extension tomorrow, it would only represent a means to elicit more money when he goes. But Hanson…he’s probably better than us, but not enough to elicit a bigger club to come knocking. Perhaps this is my geographical self-loathing coming knocking again, but I don’t think it is. This contract does represent something real.

Without him the whole thing falls apart. Andrew Davies categorically “sets the tone” for the defence, and his absence is painfully obvious. Hanson executes an equivalent role for the forwards; he’s the leader of the dark. What’s more, he sets a tone for the whole team. He’s not a rah-rah Gary Jones-type leader, but the way he runs and runs – relentlessly putting his body on the line – sets the style for the team. He leads quietly and thunderously by example.

With him committing to an extension we are now in a position where we have to start thinking about James Hanson in a historical context. The present has been so fun, there hasn’t been much looking forwards, why devalue the now? But Big Jim may actually be onto something really special.

If he stays fit this year, he will almost certainly crack the top 10 goalscorers in the club’s history. Quite the achievement for someone so often derided for his profligacy.

Ian Ormondroyd is Hanson’s obvious comp. Similar background, similar style. But Stix only managed 26 goals in a City shirt. Windass is probably the club’s best modern day striker, and before his City career ended acrimoniously seven years ago next month, he’d notched 76 goals for the club.

Looking at his four-season career to date, there is a pretty consistent level of performance. If you were to take a conservative estimate for future production, say 43 games per year (all competitions) and 13 goals, he would finish his contract in the summer of 2017 with 356 appearances (6th all time), and 103 goals (2nd all time), and what’s more, he won’t have even turned 30 yet.

It’s a bit mad that the gangly kid that we all watched stumble around on the left wing in pre-season friendlies may be about to enter the pantheon of all-time great City players, let alone City forwards, only four years later.

Now this isn’t to say this is a sure thing, obviously. He’s been rarely injured so far in his career; he may be ‘due’. However there is no evidence to suggest this. Given his uptick in form over the past 18 months, I’d argue those numbers were on the pessimistic side of the average. If he continues his progression, Bobby Campbell may just be in reach.

James Hanson has a legitimate chance to oust Joe Cooke from this list by this season’s-end. Nahki Wells (if he stays beyond January) has a genuine shot at Windass’s record. Wells needs 24 more goals to become the joint third highest goalscorer in the club’s history. Which saying that he would only have been here three seasons, is preposterous. Hell, Nahki’s got 10 games until the end of January; he needs 16 to catch Cooke.

There is a better-than-slim chance that Nahki Wells and James Hanson could both finish their City careers in the Top Five All Time Bradford City Goal Scorers. In three seasons of making history, the City striker pairing could go out the same way. They are undoubtedly the best strike partnership this club has had since Lee Mills and Robbie Blake (34 and 47 City goals respectively), and they are absolutely making a conversation of that one.

It’s not just numbers in Big Jim’s favour though. James Hanson already has his “defining moment” in his back pocket: that goal at Villa Park. He has been an integral part of the rebuild, and has done as much as anyone for the club in his four seasons to date. All of that allied to his longevity, and performances on the pitch sets him up on the path towards something special.

There’s an admittedly-sizeable chance all of this may turn out to be an act of hyperbole, and he is a player made by his partner; or the contract is in fact just a means to elicit more money from potential suitors. He may end up fading away before his star ever reaches his full size, but that isn’t the romantic way to look at it. Or the fun way to look at it!

And for a lad born within the City limits, exploding from the Co-op to the stars; you couldn’t really pick anyone better.  You couldn’t write a better story for a fallen club at its nadir. And with the next three and a half years laid out in front of him, James Hanson is right on course for his fairy tale finish.