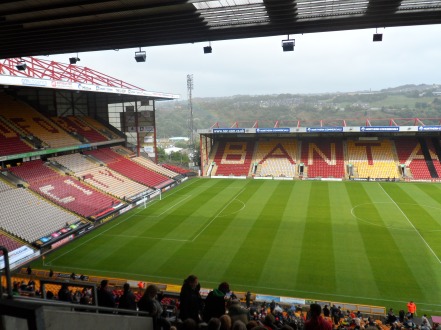 20-year-old Reach is another product of Boro’s highly-regarded youth academy, and spent the first half of this season on loan at League One rivals Shrewsbury Town, where he was a regular. Reach also played 20 times for Middlesbrough last season, scoring on his home debut in August 2012.

It will be very interesting to see just how Reach’s time at Valley Parade pans out – and whether he represents a change in Parkinson’s long-term loan strategy. With the exception of Andrew Davies and Ricky Ravenhill during his first season in charge, the manager has rarely used the loan market for anything more than strengthening the depth of his squad.

Last season, City brought in Craig Forsyth, Tom Naylor, Curtis Good, Blair Turgott and Ryan Dickson in on loan, but only the latter – who suffered a bad injury early in his time – was seemingly ear-marked to feature regularly (and even then, only because James Meredith was injured). It has been the same story this time around, with Reach’s team-mate Connor Ripley used as back-up to Jon McLaughlin, and recent loan recruits Aaron Jameson and Jordan Graham yet to feature.

Parkinson’s loan approach has won him favour with supporters – plus Julian Rhodes, who over the past decade has sanctioned more than his fair share of temporary signings who subsequently underwhelmed – and has rightly or wrongly being held up as one reason for team spirit being so high. Yet with Parkinson robbed of his influential left flank, as both Meredith and Reid sit on the sidelines, the need for a quick fix has been heightened.

Nevertheless, will Reach come straight into the side against Preston North End next Tuesday? And if he does, what does that tell us about Parkinson’s views on the club’s other left-sided player, Mark Yeates? The summer signing has flattered to deceive and was roundly criticised for his feeble display against Sheffield United on Saturday. Yet there is a widely-held assumption that Yeates is earning good money – certainly higher than should ideally be allocated to the squad player status that he has held.

Reach is said to possess greater pace than Yeates – something City will desperately need in the absence of Reid. But one is left pondering about whether Parkinson is about to alter his long-term loan stance in view of the circumstances, and what such a change – of favouring a loanee, potentially for the remainder of the season – would say about the future of the man he would be selected in front of.