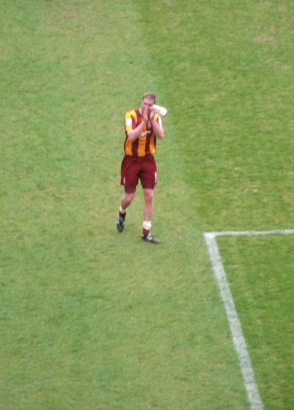 Some players are cruelly sentenced to never be remembered as fondly as they deserve to be. Not due to any personal failings or mistakes, but because the period during which they excelled was a more generally unhappy one. Luke Oliver is unquestionably a Valley Parade hero, yet his accomplishments occurred during a 15-month period where things were generally dismal at Valley Parade – an era we’d all rather forget.

In both 2010/11 and 2011/12, City finished 18th in League Two and along the way triggered very, very real concerns about the likelihood of retaining their Football League status. No one stepped up to the plate more than central defender Oliver, who put in some masterful performances that ensured City didn’t fall down the non-league trapdoor. During what represented a modern-day low ebb for the football club, Oliver led the rescue mission. He will always be thought of affectionately by City supporters for it.

Oliver departed Valley Parade last week on an ill-fitting low key note. That horrendous ruptured achilles injury, picked up at Burton Albion’s Perelli Stadium in October 2012, put Oliver out of action for nine months and saw him cruelly get left behind. On the evening that the extent of Oliver’s injury was made public, City knocked Premier League Wigan out of the League Cup.

Go through the many, many wonderful moments of the 2012/13 season, and Oliver’s name was absent from the story. It’s not easy for a six foot seven inch person to blend into the background, but that’s unfortunately what happened to Oliver. We Made History – largely without him.

But if it wasn’t for Oliver’s heroics before the 2012/13 season, City probably wouldn’t have even been a Football League club and gone through them. None of it would have happened, without him and others ensuring that the foundations remained in their place during some stormy times.

If – the day after Peter Taylor left Valley Parade following that nerve-jangling victory over nine-men Stockport County in February 2011 – you were asked to select members of the-then squad to step up and save the club from relegation, Oliver’s name would have appeared near the bottom of most people’s lists.

Oliver was signed 12 months earlier by Taylor, initially on loan from Wycombe, with warnings from supporters of his old clubs that he was a calamitous defender prone to making gaffes. Taylor had worked with Oliver at Stevenage and Wycombe, and you assumed that he would know how to get the best out of him. So when a permanent deal was agreed for Oliver to join the Bantams that summer, no one was too worried.

Yet Taylor’s first – and only – proper season in the Valley Parade hot seat was a huge disappointment. All but David Syers, of his summer signings, under-performed, and the manager’s attempts to patch up the many leaky holes with questionable loan signings clearly damaged squad morale. Oliver started slowly; and then when James Hanson was injured, was thrust up front as an emergency targetman for almost a month. It coincided with some of the most wretched football I have ever seen from a Bradford City side.

Oliver up front, City playing long ball football and with three strikers sat on the bench – it was a set of circumstances that understandably drew dismay from supporters. Especially as it all left City second bottom of the Football League by early October.

With Hanson back and Jason Price brought in on loan, Oliver was thankfully kept away from the forward line but still struggled on return to his centre back role. There was at least one mistake in him per match. He bumbled his way along in a team that just couldn’t get going. And when Taylor and club decided it was best to change manager, we all assumed that Luke would quickly follow him out the door. A modern day Jason Gavin.

Yet something happened immediately post-Taylor: Oliver started playing well. At first not many supporters – understandably fed up of a season’s worth of poor displays from him – noticed. But in crucial games during that relegation run-in, Oliver was a rock. A Tuesday night home game against relegation rivals Burton springs to mind. City weren’t great and should really have lost, but Oliver’s man of the match display helped ensure a valuable point was gained. He also performed exceptionally during a vital Easter Monday victory over Aldershot that all-but-ensured survival. The gentle giant had grown tall.

Nevertheless, his future seemed destined elsewhere. Interim manager Peter Jackson fed upon the mood of supporter discontent towards the squad by putting everyone up for sale. Oliver found himself relegated to playing in a Development Squad pre-season friendly at Silsden, alongside fellow outcasts Michael Flynn and Robbie Threlfall. Guy Branston had been brought in, Steve Williams’ career hadn’t yet stalled; so Oliver began the season as fourth choice centre back – even central midfielder Lee Bullock was favoured ahead of him on the opening day of the season.

But as injuries arose, Oliver was given a chance and carried on in the manner he ended the previous season: hugely impressive. While Branston struggled to live up to his and Peter Jackson’s hype, Phil Parkinson came in and quickly rebuilt the back four around Luke. Andrew Davies was signed on loan to partner him with Guy shipped out on loan, and the club’s struggles that season would be the result of other, weaker areas of the team.

For Oliver was simply outstanding – even being nominated for the December League Two Player of the Month. His new-found confidence best illustrated by his gradual comfortableness on the ball and in bringing it out of defence. Strong in the air but also agile on the deck, Oliver was tasked with attacking the ball when it came into City’s box, with Davies on hand to clear up anything he didn’t repel.

As the club made hard work of avoiding relegation, Oliver and Davies were more and more vital. The bad night against Crawley robbed Parkinson of his centre back pairing, but Oliver returned from suspension in the nick of time to be the lynchpin of back-to-back April victories over Northampton and Macclesfield which confirmed survival. He was the runaway winner of the Player of the Season awards, and could look forward to playing a key role in future, happier times.

Alas, soon after injury struck. Oliver began 2012/13 in the side and, though perhaps not hitting the heights of the previous year, he was letting no one down. Ever-present in the league, until that fateful day in the East Midlands. One can only imagine how bittersweet it must have been for Oliver to see the club enjoy such spectacular success without him.

The worst thing was that Oliver was not missed. Rory McArdle looked superb in taking his place in the centre. Carl McHugh emerged from nowhere to impress in Davies’ absence. Nevertheless, there was hope that he would still have a future at Valley Parade, this season.

Starting off on the sidelines as he battled to prove his fitness, Parkinson talked of letting him go out on loan and then, a matter of days later, brought him in to start against Brentford due to McArdle being on international duty. City won 4-0 and Oliver was terrific. He filled in twice more for Rory, but the long-term absence of Davies in October did not open the door for him. In came Matthew Bates to partner Rory, instead. The fact both Oliver and McArdle are so right-sided ruled out any realistic prospect of forming a partnership.

Perhaps saddest aspect of all was that Oliver’s final appearance in claret and amber came in that old Taylor positon – up front. A Boxing Day home loss to Rotherham, with City badly missing Hanson through injury, saw him introduced from the bench to play targetman with three minutes to go. He barely touched the ball as City were deservedly beaten. It was no way for our hero to bow out.

Oliver does not reach his 30th birthday until this May, and I really hope that he has another five or six good years left in him to make up for the lost time of the past 18 months. It was the cruellest of twists of fate that a player who truly stood up when the chips were down didn’t subsequently get to enjoy the good times, but the mention of his name will always spark great affection.

He set the standards that others have followed. He raised the bar when it seemed no one else could or would stop it from falling further. He played a key role in applying the brakes and in turning around this club – and for that we will always be thankful.