Home › Previews › The here and now

The here and now 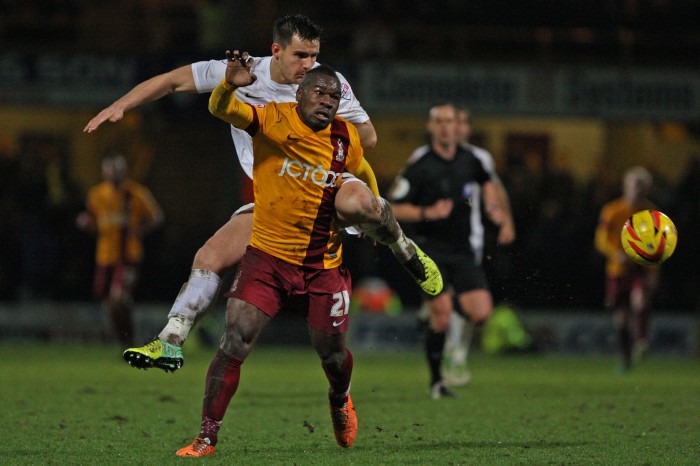 “Live each season as it passes; breathe the air, drink the drink, taste the fruit, and resign yourself to the influences of each.” Henry David Thoreau, August 1853

In the aftermath of the defeat at the hands of bottom placed Stevenage last weekend the disappointment in the 3-2 result, and particularly City’s failure to capitalise after twice being ahead, was perhaps overshadowed by a feeling of inevitability.  The historic tendency of the Bantams to somehow conjur defeat, against the backdrop of a seemingly nailed on three points, had again reared its head, and it felt like a return to the bad old days.

However, as the goodwill from last season also continues to fade, and is justifiably no longer a convenient excuse for any failings of this season, it also feels like now is the time to wipe other parts of the slate clean and avoid wallowing in previous negativities from the last few years.  The box marked ‘persecution complex’ can be left unopened for the foreseeable future.

Whilst it is increasingly likely (and hopeful) that the tail end of this season will probably see a mixed bag of results as City hopefully stumble across the line to mid-table safety/obscurity, it is also worth emphasising, and more importantly enjoying, the fact that we are in League One.  We are facing some decent sides week-in-week-out, who play a great quality of football, and on the majority of occasions, the Bantams have not been massively outclassed.  Looking back we have had some cracking matches served up this season, and the atmosphere created at Valley Parade has been terrific and something to be proud of.

As Jason said earlier in the week, it is important to remember where we have come from and enjoy the moment that is now.  Sure, we have had some frustrating results; but this is certainly a much better place to be and hopefully part of a longer upward journey.  In addition to removing any unnecessary retrospection it is also worth avoiding ‘wishing this season away’, as we clearly need to align on the present.  With the potential of a relegation trapdoor beckoning if distracted, City need a complete focus on the forthcoming games, one at a time, and perhaps foster something of a cup tie mentality from hereon in.

Which brings us nicely on to what looks like an extremely challenging fixture away at Brentford.

The Bees have followed an ultimately unsuccessful play off campaign last season with a very solid season thus far.  The departure of manager Uwe Rosler to Wigan back in December has not really disrupted the season at all, and indeed Brentford have hovered around the top of the table throughout the season.  In stark contrast to City, they have only lost once in the league since mid-October 2013.  Their home record, with 12 wins out of 16 on home turf, is bettered only by Wolves presently.

A very tough test for the Bantams, who will have to be on their best to get anything from a match that Brentford will see as a must win to propel a push for an automatic promotion berth.

The fitness of Andrew Davies may well have an impact not just on Saturday’s match, but how the next few matches unfold for the Bantams.  Davies’ return to the side has certainly solidified the defence, as evidenced by the two clean sheets prior to the Stevenage game, and also has helped breed much needed confidence, with players such as Rory McArdle, showing improved performances.  Mid-week noises from the player himself seemed to indicate that Davies has a fighting chance of being fit for Saturday, but the backroom staff will be keen to avoid causing any long-term issues from rushing the lionhearted defender back.

In the absence of Davies, it would be expected that Matthew Bates will again deputise in his favoured position.  Following recent City victories, albeit without him, Bates now appears to have been passed the poisoned chalice of the doom-mongers go-to statistic, having so far experienced a solitary win in 18 appearances in a City shirt, and he will be keen to ensure this record is not prolonged.  It will also be hoped that McArdle’s mid-week Northern Ireland international trip to Cyprus does not impact him in the manner similar to his jet setting prior to October’s Coventry fixture seemingly did.

Phil Parkinson will possibly make no other changes.  It would make sense to give Garry Thompson another start at the expense of Kyle Bennett, in a game like this; with the latter better suited to come on in the closing stages.  Mounting pressure on Aaron Mclean to break his City goal duck was further fuelled by comments from Parkinson after the Stevenage match, and it is hoped that Mclean’s second half miss during the Stevenage game does not overly dent his confidence.

The protracted hunt for a left back seems to have gathered some new momentum this week and it is expected that a new loan signing may well be available for Saturday.  Should this not happen, Carl McHugh will no doubt again occupy the slot and will face a tough examination from an attack-minded Bees side who like to employ a high pressing game.

Brentford manager Mark Warburton, the man whose 40’s mid-life crisis saw him give up a job as a trader in the City of London to pursue football coaching, will name a side likely to include top scorer Clayton Donaldson.  Donaldson, he of Bradford origin, usually seems to go out of his way to avoid endearing himself to the City faithful, and it will be no surprise to see him similarly pumped up.  Other notable players include striker Marcello Trotta, who has netted 11 goals so far and goalkeeper David Button, sent off in the corresponding fixture at Valley Parade in September.  Winger Sam Saunders, out since January with a knee injury, remains on the sidelines after recently undergoing surgery.

Whilst not a make-or-break match by any stretch, defeat will leave City again looking nervously over their shoulders, and, should other results go adversely, the current six point safety cushion from the relegation spots could be severely ravished.

This may be particularly damaging to confidence levels given a subsequent tough run of fixtures after the match including trips to Colchester, Shrewsbury and Leyton Orient, and a strong performance on Saturday is the basic requirement, hopefully supplemented by a positive result.