City fail to take the sting out of The Bees’ tail

Like waiting for the a London Bus us Southern Supporters have been waiting all season for the Bantams to grace the capital, and now have two games to look forward to in one month. On Saturday, City travelled to West London for the first time since last May – although this time we hurtled straight past the national stadium, down the North Circular en route to Brentford’s Griffin Park.

Brentford have certainly taken some knocks since last May. They had two bites at the promotion cherry but were condemned to another year of League One football thanks to an incredible last game of the season and then a loss to Yeovil in the Play Off Final. Following a shaky start to this season, Uwe Rolser got his team firing on all cylinders again by October but then left the club for Wigan Athletic in December.

These events would have left most clubs shell shocked – but what hasn’t killed Brentford has made them stronger and they currently sit very pretty in 3rd with two games in hand on 2nd. With their biggest league defeat of this season coming at the hands of today’s visitors (a 4-0 thumping at VP ), revenge must have been on the lips of Clayton Donaldson and co as they stepped on the pitch looking to get a step closer to automatic promotion. 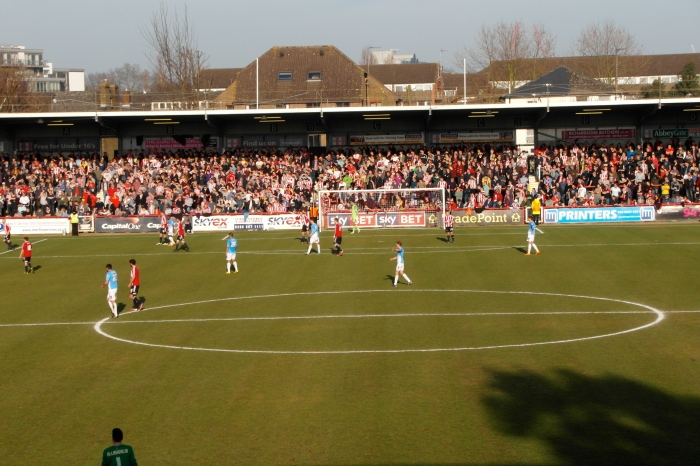 Prior to kick off the mood was good amongst the travelling contingent and discussions in the New Inn (one of four pubs on each corner of Griffin park) were of a good weekend away in London regardless of the result. The mood dimmed slightly though, as the rumours circulated that there would be no Andrew Davies or James Hanson in the line up and thoughts turned to how we would mix up the tactics to account for the change in personnel.

Speaking with an old school friend and life-long City fan, Paul Naylor, we discussed how tough it is to be a Southern-based supporter and not wear rose-tinted spectacles when viewing a game compared to those who, like Paul, follow the Bantams home and away. With two key players missing and the odds stacked against City, I think even with the rosiest of tints we could agree that what we were going to be in for a tough afternoon.

The early spring sunshine shone brightly over the Brook Road Stand at Griffin Park which has been the home of Brentford for 100 years. The home fans will have been more than glad of that sunshine caressing their faces (and being in their eyes) because what Bradford City turned up with today was not a pretty sight at all.

So many times we have  watched an away team come to Valley Parade and shut up shop, hoping for a draw. Packing out the midfield and risking very little going forward hoping for a set piece or a run against play to get a lucky goal. Today it was our turn to play that very role, to the detriment of the whole game.

It would have been completely understandable to see us set up as we did if Hanson was playing in the lone striker position, because he excels in winning everything that is pumped up to him and chases down everything that isn’t.

But with him unavailable, Aaron Mclean was put in James Hanson’s position and expected to perform the exact same role. You had to feel for Mclean as he applied himself exactly as you would want effort wise, but he was feeding off the very little and could not get near the ball to create any kind of resistance against the Brentford waves of attack. 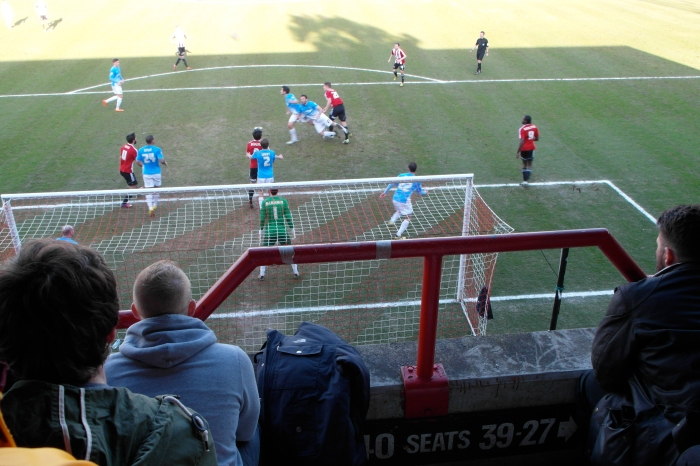 Even with a five-man midfield of Gary Jones, Nathan Doyle, Chris Atkinson, Adam Reach and Kyle Bennett, City struggled to get any grip on the game and the first half was like an attack and defence training routine. The middle two of Nathan Doyle and Gary Jones couldn’t get a handle in the middle of the park and Atkinson, who was playing just in front, was largely ineffective and failed to offer any support for the lonely Mclean up front.

Any moment of magic (should it have arrived) would have been expected to come from the wide two Bennett and Reach. Unfortunately for Reach he was up against a highly impressive right back Alan McCormack, who dealt with any threat and kept him at bay for the full 96 minutes.

The brightest attacking performance in a blue shirt today came from Bennett – but even that was muted by a impressive Brentford defence. Bennett kept knocking on the door of left back Jake Bidwell showing trickery and good touches, but he just couldn’t get through.

When City did have opportunities to attack it came from a few free kicks around the box and five corners. Gary Jones delivery, however, was not up to its usual standard and struggled to connect with a blue head. It wasn’t our day at all.

Still, we somehow managed to hold strong in defence and dealt with wave after wave of attacks, until the referee blew to end the first 45 minutes. Rory McArdle partnered Carl McHugh at centre back with Matthew Bates and the impressive Stephen Darby taming the advances of the Brentford wingers.

Half time brought despondency amongst City fans that I have not seen for a long time, but Parkinson will have been happy as his game plan was fully effective after 45 minutes. For the fans though it was bad viewing – we had not had a shot on goal and we didn’t look like getting one. It was horror show stuff.

The second half kicked off and for a brief moment City opened up Brentford but after a few traces of what might have been Brentford regained control and continued the onslaught on the City goal. The two goals inevitably arrived and inevitably it had to be that man Clayton Donaldson to begin proceedings. He could have had a few today so even though one was salt in the wounds – it could have been worse.

Having gone a goal behind Parkinson made a change and took off the ineffective Chris Atkinson and replaced him with Andy Gray and reverted to a 4-4-2; but before Gray could get his heart rate going we were 2-0 down. The second goal by George Saville seemed to take an age to trickle over the line but it did and was a final nail in the coffin for City’s hopes of taking anything from the game.

Brentford were relaxing now and were considering what they fancied for their tea that night and so the game opened up slightly and City were able to push forward and managed to win a few more corners. We even had a shot on target from Jones, but it was an effort that brought more of a flashback to Swansea than it was to Crewe at Valley Parade a month ago.

As if the afternoon wasn’t already painful enough we had to endure six minutes of injury time due to Mclean’s head injury – never before have I heard an entire stadium let out a despondent groan when those minutes were held up by the 4th official.

The 2-0 score line flattered City today and what Parkinson had planned to do here today ultimately failed. Brentford dominated from start to finish, but as damming as this report is I do not feel that I can take any credit away from any of the players for efforts – no one can be credited for having a particularly bad game – we were outclassed.

If it is true what they say that absence makes the heart grow fonder then I was certainly in a situation of being totally excited and slightly hopeful that we might pinch something against Brentford today; but as my rose tinted spectacles lay in pieces on the floor of Braemar Road, I can only hope that this performance is improved upon and quickly.

Today’s saving grace for me was our fans. You have to love the Bradford City supporters. Many travelled down to London this weekend with nothing but a hope of a lucky result and, despite a terrible outcome on the pitch, they really gave it their all. They sang from start to (nearly) finish and were undoubting in their support for a team that has given them so much in the last twelve months. Surely they deserved more today.

I wonder if Parkinson approached the game today as he did Wolves at the beginning of February? I can see the sense in resting your best two players for a game that is more winnable and not risk them getting injured in a tougher fixture. Maybe that is the case, but that is not in the slightest bit entertaining and it is not what the Bradford City supporting faithful will want to see much more of in the future. We want and deserve better.

Thankfully we have Colchester away on Tuesday which can offer us some quick relief (hopefully). It can’t come soon enough.