The day the sun shined for departing City players

This was a leaving party with a strange feel – for it was unclear who, exactly, we were bidding farewell to. For the last Valley Parade match of the season, 11 of the 14 Bradford City players who featured are not contracted to play beyond next weekend’s final match at Tranmere. Change is coming; but who is to be shown the door remains unclear, perhaps even to Phil Parkinson himself.

On an afternoon where many players were surely aiming to press home their case for a new deal, the atmosphere in the stands was laced with sentimentality. Eight of those 11 were part of the 2012/13 vintage, and have built up a deep affection with supporters that will prompt great sadness if this is to prove the last time their Bradford public sees them. The end-of-season lap around the pitch was well-attended, and the Kop led the chanting of appreciation.

Some of the most celebrated players in Bradford City’s history might have just taken their final steps on the Valley Parade turf.

It was fitting, therefore, that the winning goal was scored by a member of the ‘We Made History’ team – especially as his future seems the most clear-cut. Garry Thompson has barely started a match since January and is surely going to be shown the door. With four minutes left on the clock, Thompson glanced home Gary Jones’ corner to ensure an unexpectedly joyful swansong to his memorable two-year spell at the club. Thompson also netted the final home goal of last season, and it is worth contemplating just where the Bantams might be without that vital, play off semi final contribution.

This time around, Thompson’s goal has ensured that City cannot finish any lower than 15th in League One – which constitutes a commendable rise for a club that only narrowly avoided relegation to non-league two years ago. But Parkinson can only toast that success for a fleeting moment, in order to ensure stagnation is kept at bay. He needs to raise the quality of the squad to deal with next season’s inevitable raise of expectations. He needs to get his retained list right.

Which meant that, today, the players had to rise above the drop of intensity that an end-of-season game between two mid-table sides naturally triggers, and offer a convincing case that they are still relevant to the club’s higher ambitions. For the most part that determination was evident, as City played some purposeful football that was pleasing on the eye. It was hardly edge-of-your-seat stuff and a world away from the high intensity of the early weeks of this season, but with the 4-3-1-2 formation once again deployed, it appears as though Parkinson plans to change more than just personnel for next season.

Compared to its success against an open Peterborough, the shape of the City team proved less effective against a reasonable Crawley side who largely defended deep and broke forward in cautious fashion. John Gregory employed a 4-5-1 set up that has caused City so many problems this season, but today it was cancelled out by Parkinson’s own narrow midfield three of Gary Jones, Nathan Doyle and Rafa De Vita. Over the final few weeks of the season, it has become evident that the City manager has increasingly focused on stopping the opposition from playing, and the significant overall improvement to the goals against column would suggest it is bearing fruit.

Yet the 4-3-1-2 relies so much on the man playing in the hole to dictate attacks, and Mark Yeates – who played in a similar role for City earlier in the season – struggled to make the same impact as the now-departed Adam Reach last Friday. Yeates had less space to operate, but was too often guilty of slowing down his team’s forward momentum by holding onto possession for too long and picking the wrong pass. Yeates was one of the three starters with the security of a City contract for next season, and yet his days at Valley Parade appear numbered. There were good moments in this, his first start since December, but he was still a long way short of demonstrating that he is man to build next season’s team around.

Something that Parkinson simply has to be considering with regards to another in-contract player, Aaron Mclean – who has so far struggled to fit City’s style of play. Back in the side after injury, Mclean was clearly lacking fitness and at times cut a sorry figure as nothing would come off for him, but then just after half time he raced onto Doyle’s throughball and smashed a low shot past Paul Jones – a welcome reminder of his striking prowess.

The former Hull striker wasn’t exactly handed a glut of one-on-one opportunities during his previous 18 games in claret and amber, but has previously wasted similar chances to this one. His third goal for City was less instinctive than the previous two, but somehow more impressive.

Mclean was only fit enough to lead the line for an hour, at which point he made way for Thompson and, four minutes later, Crawley were level in a move that summed up Yeates’ failings. City had been on the counter attack after a corner was cleared to Yeates. With few options in support, he misjudged a cross-field ball attempt from which Crawley were able to muster their own counter attack. Home players had been charging up the pitch to support Yeates and were now caught out, with a breakdown in communication between substitute Carl McHugh and keeper Jon McLaughlin allowing Jamie Proctor to lob home an equaliser.

At that point, Crawley looked the more likely winners and pressed, but City stood firm and eventually regained the attacking initiative. Jon Stead was the home side’s best player – he ran tirelessly, won so much and caused numerous problems – and represents an interesting consideration when strengthening the forward line this summer. The other loan players on show today – Adam Drury and Kyle Bennett – also caught the eye. It is easy to envisage them both being at Valley Parade next summer.

A late shot from Thompson was pushed away by Jones for a corner that led to the same City player’s winner. It sparked warm celebrations around Valley Parade, and the closing stages were played out in front of a wall of noise from three sides of the stadium. After things had looked bleak in mid-February, with that run of one win in 21 suggesting a slow slide towards relegation, six victories from the last 15 represents a steady improvement at a vital time. The players and management fully deserved the rapturous appreciation they received on their lap around the pitch.

Whether some of the players behind the late improvement will be rewarded with a new contract is now the main focus of attention. The likes of Stephen Darby, Rory McArdle, Nathan Doyle and Gary Jones have really stepped up when their club needed them, and it would be hard on them if they were told to leave. But equally, sentiment can only be allowed to exist amongst us supporters. Parkinson will know that he is going to come under pressure if his close season activity doesn’t pay dividends, particularly in view of his recent under-performance in the transfer market. He needs to be ruthless over the next fortnight.

And if that ruthlessness leads to bad news for any of the 11 out-of-contact players who played today, at least they will be able to take away one final happy memory of playing at Valley Parade. A day when the sun will always shine. 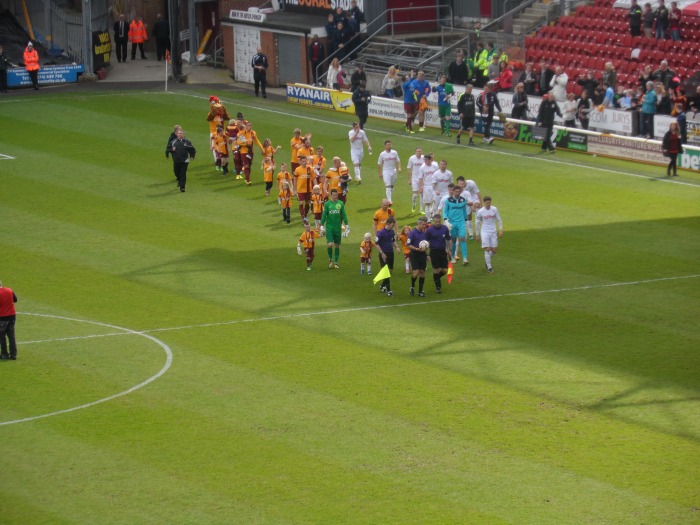