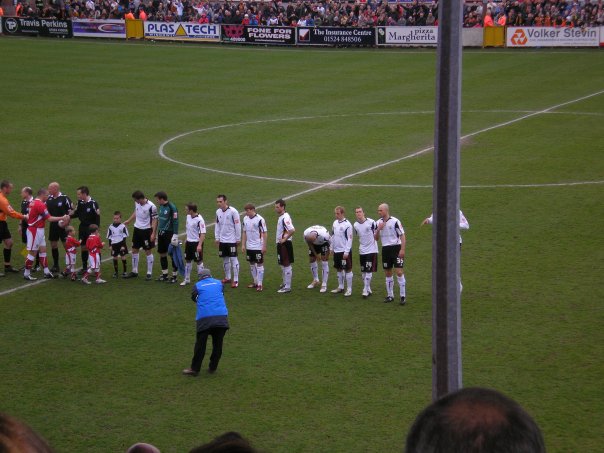 Part of the scene: Morecambe away, April 2009

In consecutive years, each was voted player of the season by Bradford City supporters. A demonstration of their popularity, offering credibility to the argument of persisting with a youth set up even during times of austerity. Yet rather than fulfilling hopes and expectations of remaining on the Valley Parade scene for many years to come, this season the pair find themselves playing in the City of Bradford but not for Bradford City.

Joe Colbeck has this summer signed for Bradford (Park Avenue), whilst Luke O’Brien has joined Thackley. Joe is still only 27-years-old. Luke is two years younger. They should still have another 7-10 years playing professional football, even if it’s not for the club with whom they climbed up the youth ranks to make it as a professional. “I’m really looking forward to it,” Colbeck told the Grimsby Evening Telegraph, as he faced up to his release by the Mariners and the signing of a part-time contract to play at the Horsfall Stadium. As yet O’Brien has made no public comment about his move to Thackley. He was released in May, after a fruitless individual season playing for Conference Premier side Gateshead.

How did it come to this? How have such bright hopes faded so abruptly?

It would be wrong to romanticise the Bradford City careers of Joe Colbeck and Luke O’Brien. Their respective player of the season awards were terrific standout moments that reflected just how well they had performed in claret and amber, but you don’t need to speak to many Bradford City supporters to find someone who will dismiss at least one of the pair as “sh*t”.

The truth is that Joe, and to a lesser extent Luke, had an extremely difficult time trying to win over the Valley Parade crowd. They had their supporters for sure (I was certainly one of them, in Luke’s case); but when either made mistakes or the team was under-performing, the pair would come under a harsher spotlight than others. It is a familiar pattern that has affected previous City youth products, and it will no doubt happen in future with The Next Big Thing.

But sh*t or not, the longevity of both players at Valley Parade proved they had more substance than people give them credit for. Joe Colbeck played 116 times for City, making his debut in 2004 and leaving the club in 2009. He was awarded a debut by Colin Todd and – after initially bursting onto the scene in 2005/06, and in September 2006 impressing a watching Derby County scout enough for the Rams to make an enquiry – endured an up-and-down time under David Wetherall and initially Stuart McCall.

In 2007, McCall sent Colbeck to Darlington on loan and received back a completely different player. He was sensational during the second half of the 2007/08 campaign – on the road at least. So many match-winning performances that cemented his player of the year award. Tellingly, Colbeck was still less of a force at Valley Parade. If you only saw home games that season, you will still be wondering what the fuss was about.

Colbeck’s decline began at the home of his final professional club: Grimsby away in October 2008, and a bad injury to the winger in the closing stages rules him out for three months. He wasn’t the same player on his return, struggling to get into a team that had found a way to win games without him and then, by March, a team that had lost its way. Colbeck was asked to be saviour to City’s faltering play off bid, but couldn’t handle such responsibility. The crowd destroyed him. I still shudder thinking of the Easter Monday home draw with Lincoln, where Colbeck’s brittle confidence was ripped to shreds. McCall had no choice but to take him off.

By this time Luke O’Brien was the new darling of the crowd. He would ultimately make 149 appearances for the Bantams, becoming a regular in 2008/09 after Paul Heckingbottom picked up a bad injury. O’Brien was a revelation at left back, most memorably scoring the goal of the season in a 2-0 Don Valley victory over Rotherham. Steven Schumacher would later recall how much Luke stood out in the youth team even to the watching senior players. At the end of 2008/09, the rising star was crowned with the player of the season trophy that Colbeck had lifted 12 months earlier.

And he continued to be relevant even after McCall had fallen on his sword. Peter Taylor’s first signing as manager had been a left back to take O’Brien’s place, but he eventually won it back from Robbie Threlfall. Peter Jackson preferred Luke too, and going into the 2011/12 season declared that Threlfall could leave the club. It is rumoured that personal problems in O’Brien’s life caused a rethink on Threlfall’s future, and Phil Parkinson never looked like a fan of O’Brien. In January 2012 Luke was moved on; Parkinson preferring to use centre back Marcel Seip as his left back.

Yet the destinations of both Colbeck and O’Brien were not downwards initially: from Valley Parade, they moved up divisions. In the summer of 2009 Colbeck turned down a new contract under McCall, preferring to attempt to impress enough in pre-season to convince City to offer him better terms. In the end he was reunited with his Darlington saviour Dave Penny with League One Oldham (who described Colbeck as being in the “Stanley Matthews mould”). To put the £60k move into perspective, that summer Oldham was also the destination of City’s star loanee who we could never hope to keep: Dean Furman.

O’Brien also moved up a league, to St. James Park and Exeter. That neither player excelled in League One was no huge disgrace – we knew they had their limitations – but surely they could sustain careers in the basement league at least? Colbeck left Oldham soon after Penny was sacked, signing a two-year contract at Hereford United. He was, infamously, the subject of horrendous barracking on his first return to Valley Parade that 2010/11 season, but a year later came off the bench in the same fixture to some applause. At Edgar Street in 2011/12, Colbeck played more games in a season than he’d ever achieved before.

Yet the decline continued. O’Brien, released by Exeter after just three appearances, joined Oxford on a sh0rt-term basis in 2012 and played against the Bantams to warm appreciation from his former supporters. He played just 15 times for the Us, however, and spent last season at Gateshead. Meanwhile a relegated Hereford released Colbeck and he rocked up at non-league Grimsby. In two seasons at Blundell Park, Colbeck had a mixed time with some excellent performances (such as a hat trick of assists in a derby victory over Lincoln) offset by further injuries and an FA fine for improper comments on Twitter.

Which brings them back to the City of Bradford this summer and playing part time. There are former City youth team mates of the pair who barely got a chance at Valley Parade, yet who now feature higher up the league ladder. Their fall is staggering, and seems too much. Perhaps, just like another youth graduate Mark Bower, who moved to Guiseley in order to combine playing with setting up an estate agent business, it is their choice to sink so low. That there were better offers on the table, possibly to stay full time, that didn’t appeal. That the money on offer would be too low to live on, and that combining a part-time wage at BPA/Thackley with another job will prove more rewarding. Especially as they can continue to live in an area they grew up in. (O’Brien is still seen in and around the Valley Parade, and still attends the player of the season awards.)

But still, it is sad. No one was blind to either player’s faults, and the level City have now reached was clearly beyond their abilities, but four or five years of regularly playing at Valley Parade should have been cue to a long-term playing career in the Football League. Should have, but hasn’t been. An important lesson for every young player hoping to make it as a professional – it is unbelievably difficult to make a career of it.