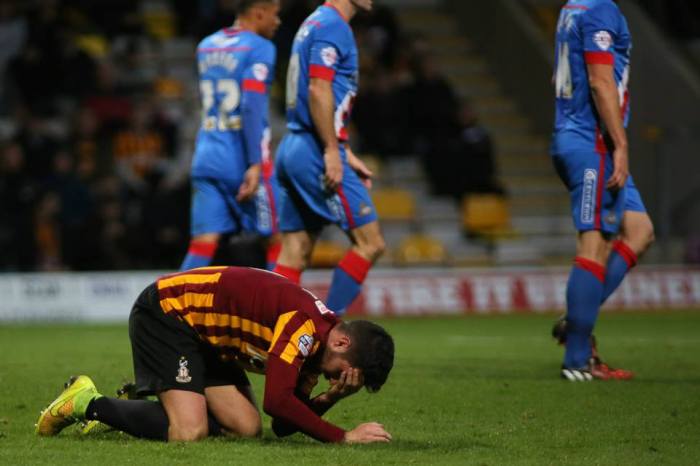 The stats suddenly make for alarming reading. Five games without a win, four of those losses; 14 shots, nine corners, and one goal to show for such dominance. A much improved performance on the surface, but another day at the office where nothing fell for the hosts. The bigger picture is scary. City must find a way of curbing this tide of negativity – and fast. The division is too tight for them to delay.

For all this was billed as a local rivalry, I probably feel as much towards Doncaster as I do One Direction – that is, nothing – but any club bold enough to once add one fifth of the band to its reserve armoury automatically receives my unqualified respect for, like, ever. The reflexes of their goalkeeper, on-loan Manchester United prospect Sam Johnstone, kept the away side in the contest, and he twice denied James Hanson from close range in an even opening ten minutes. The pick of an average Doncaster Rovers side previously sitting one point above the drop, it was a smash-and-grab performance from the visitors that now renders City just four points adrift from relegation.

It was two costly Doncaster attacks – one superb Reece Wabara conversion from a Liam Wakefield cross, and a spontaneous Curtis Main goal on the counter – against the run of play that proved to be City’s undoing. With Stead putting them ahead just before the break, it was all Bantams in the second half, and the home side paid the price for failing to capitalise on their dominance. The question, now, is thus: where do we go from here? 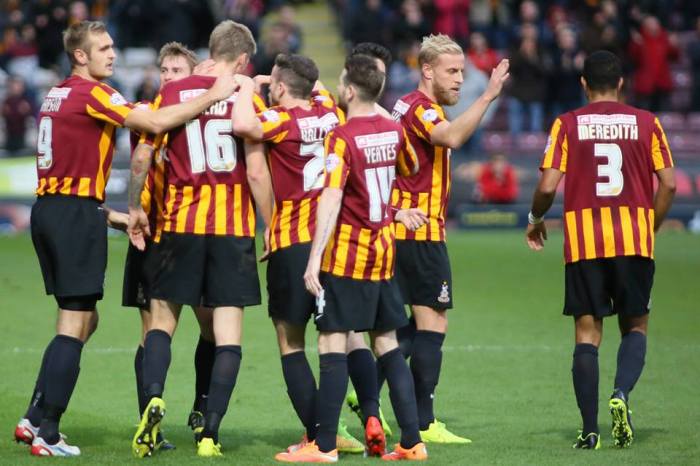 It was, by no means, an abysmal performance. If anything, City were arguably the better side over the 90 minutes, whatever you judge the word ‘better’ to entail. Billy Knott, playing at the base of the 4-1-3-1, was superb and disciplined in his distribution, picking out Mark Yeates from long-range to instigate the build-up to the – regrettably now academic – first Bantams goal. Filipe Morais, returning to action after missing out against Oldham, was a cultured, cultured act, playing with vigour, swagger and vision to stake a firm bid for a permanent place in the side. James Meredith was truly glorious to watch; Mark Yeates, by some distance, was man of the match. But it’s this spate of positives that suddenly makes the result all the more difficult to stomach.

Realistically, City couldn’t have done any more today. They gave everything, but, for whatever reason – whether the loss was simply the rub of the green or symptomatic of far more deeper-rooted issues – that ‘everything’ wasn’t enough. Doncaster’s victory was as smash-and-grab as you’ll see all season, two superbly-taken chances after they’d parked the bus. Against the narrowest of margins, it’s that final level of clinicality, that sharper cutting edge, the Little Things, that ultimately win games. Rovers excelled where the Bantams lacked: in simply finishing well. If City can play like that and still leave with nothing, we can be forgiven for thinking there are worrying trials ahead. That today’s loss marks their fifth home defeat of the season, and means the points haul falls to just one from a possible 15, has done nothing to quell the quickly dampening mood. The next few months, it would seem, could become the winter of our discontent.

As ever, your take on today will come down to how empty or full you view the figurative glass to be, but set the defeat against the wider backdrop of the season and things suddenly become rather worrying indeed. There’s widespread ambivalence among the City faithful, starkly represented through the two contrasting narratives you can choose to indulge in tonight, but there has been a unified gradual sapping of enthusiasm over the previous few weeks, for whatever reason. And from the – relative – outside, it’s been odd to watch.

I’ll come clean now and say I probably wasn’t the best person to write this report. Having spent most of the last two months taking a whistle-stop tour of the country and attending university open days, my time at Valley Parade has been limited. And once the initial anguish from being self-ostracised subsided, I cultivated a rather laissez-faire approach to most things Bradford City, and became the consummate hippy. Hakuna Matata. Out of sight, out of mind. Ignorance is bliss. Everything will be all right in the end. Leaving the ground today, I didn’t feel as gripped by loathing as I usually do after a defeat. Whether I subconsciously took solace in the mightily impressive performance or have – finally – found a way to stop City from having monopoly over my emotions, remains to be seen, but I found it odd to feel so indifferent. What is denied is desired, apparently – but did I feel that way about football last month?

I put my personal detachment down to physical distance. I’ve missed more home games in the past two months than I have in the whole eight years I’ve been a season ticket holder. Returning to Valley Parade today and hearing the chorus of ‘Take Me Home’ made it feel like normal service had been resumed. Sky became my crutch as the chortles from BD8 were rightfully drowned by the swell of UCAS, student finance and personal statements. I had other priorities and football went on the back burner, but it was strange to find others felt the same.

The malaise hardly feels ascribable to one thing. There was always going to be a carryover period, a coming down from the honeymoon of those two seasons, and it’s not fair for this current squad to shore the brunt of that.

But is it even that simple?

The History Makers were far from perfect, hence the mass exodus over pre-season, but that’s not stopping some of us from longing for those halcyon days. The days of infinity, of immortality, where the sun seemed destined never to set. I’m being romantic, I know – I’ll remember that squad for this, not this, this and this – but there was something about them that suddenly feels absent. They had an identity, a clarity – and this time?

It’s a tough one. This side were quick out of the blocks today. Some of the movements were truly top drawer. Yeates was at the centre of everything the Bantams did well today: vibrant, alive and ambitious in possession, forcing forward movements and constantly probing for an equaliser – he was being the player we always wanted him to be. His defence-splitting pass for Stead’s opener was superb, his slick through-ball to Hanson moments earlier of equal calibre. Successfully taking on his man as City hounded for the buffer of a second goal, he was visibly upset when the subsequent cross sailed wide. He is a new man, primed with renewed energy, feeling every coarse and every ripple of the Bradford City dream.

Meredith, too, was glorious to watch. Amidst the criticisms of a lack of pace and width levelled at this squad, he was utterly captivating, leaving you on the edge of your seat. There is light among the shadows – you just have to know where to look. 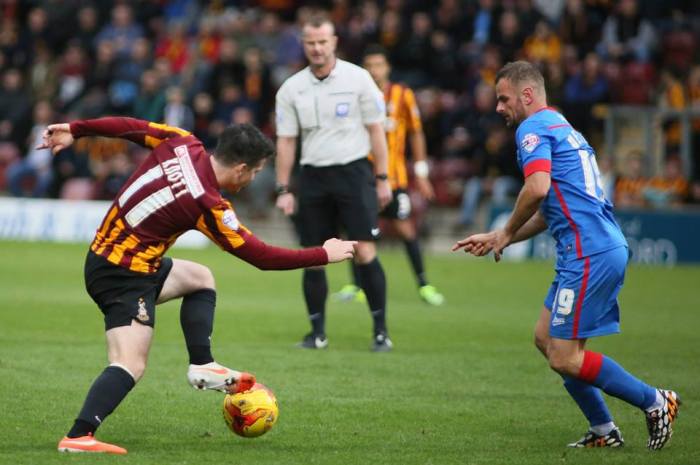 So, what’s the problem? It’s a tenuous point, but, over half-term, I read the excellent Inverting The Pyramid, in which it’s suggested the disconnect could stem from our inherent football culture: English fans grow tired of patient build-up play, allegedly; Spanish and German ones deplore anything but. The audible groans today when Darby passed the ball back to Davies, and when Sheehan held the ball up for too long and missed a vital opening, seem to signify a need to see high-energy action.

But this is overly-simplistic. We demanded a new style last season; Parkinson provided. To bemoan it now is churlish.

But Parkinson’s never really had the chance to fielded what you’d call his ‘first choice’ side. Davies out, Hanson out, Sheehan out, Liddle suspended, McLean’s absence forcing Clarke to play out of position, Darby suspended, McArdle suspended – a string of plan Bs, of chop and change, of plugging gaps and filling holes; fragmentation, stalling momentum, waiting to reset the clock. Credit to them, they’re not treading water amidst all this – but they’ll never get to be Thorpedo, either.

Competition is always good, but injuries and suspensions have forced Parkinson’s hand. Today’s reversion to a 4-4-2 following Stead’s departure made it harder for the side to maintain their momentum. More generally, dropping the diamond to revert to a flat midfield four, plus the arrival of Halliday are changes that will take time to come to total fruition. That’s a by-product of the necessary budget cut, and we have to be patient. What was this season really about?

And what of Parkinson’s top-earning striker, set to head out the door in the coming weeks? Aaron Mclean’s exclusion today seemed to signal the death knell – at least temporarily – for his time in a City shirt, and the Bantams boss confirmed he was trying to arrange a loan move for the former Hull man. The money will go towards a goalscorer to fill the hole still gaping after Nahki’s departure that’s expanded since January, and today’s performance – an awful lot of toil for little reward – further highlights the urgency of this arrival.

Next Sunday’s cup clash has the potential to make or break the season. Beat local rivals Halifax on their own patch and the season is back on track; anything else, and serious, serious questions will be asked. The national stage is the cruellest of all to lose on – defeat to a side two divisions below would, in all likelihood, extinguish the final flicker of optimism we’re desperately clinging to. Parkinson must find solutions, but there is no doubt he is capable of doing so. Until then, the spotlight shifts to the pair of swinging saloon doors, and the guessing game begins. Who will be the next striker to walk through Valley Parade?

With special thanks to Thomas Gadd for allowing us to use his superb photos. Please visit Thomas Gadd’s website for more details.

WOAP Deputy editor Katie Whyatt has also been shortlisted for ‘Best Female Blog’ in the Football Blogging Awards – click here to vote for her to win.