And breathe again. This one took a long time to get going, but by the closing stages a packed out Valley Parade was gripped by tension, dread and anxiety. One moment of brilliance – or one mistake – was going to determine the game’s outcome. At stake for both clubs was a seven figure sum of money, and a first FA Cup semi final appearance in living memory.

Yet ultimately stalemate ensued. This was a contest of low risk and reward, as both teams appeared more preoccupied by the fear of letting the prize slip from their grasp than claiming it with both hands.

Championship Reading paid their League One hosts the ultimate compliment by lining up in a manner designed to stifle. Steve Clarke chanced just one striker up front, with five in midfield. Phil Parkinson’s diamond was unable to sparkle. The space that was so readily available in the middle of the park against Sunderland was this time occupied by blue and white hoops.

Reading might not be the easiest on the eye, but their courage and backbone was evident. They were not going to lie down in the face of some strong home challenges – instead they quickly demonstrated they were more than willing to give it back. They were never going to be guilty of lacking respect for what their lowly opponents had achieved in the FA Cup this season. They stood firm and will be the happier team over this outcome. This tie will be settled in Berkshire Monday week.

And for City there can be plenty of pride felt too. As an attacking force they were subdued by Reading’s defensive approach. It was not a day where Billy Knott was able to find room for the killer pass, or where Billy Clarke could revel in playing in-between opposition lines. Tellingly, City’s best performers were their tremendous back four and Gary Liddle sitting in front of them.

Reading shaded the first half, without placing the home side under any strong pressure. With players like Jamie Mackie covering every blade of grass like a glossier version of Gareth Evans, they matched City for work-rate and produced the better first half chances. None more so than a brilliant solo Mackie run that saw the ball cut back to Pavel Pogrebnyak, with the Russian firing a low effort at goal that had Ben Williams beaten but which smashed off the outside of the post.

At Reading, Pogrebnyak has so far failed to reach the potential he demonstrated during a productive loan spell at Fulham in 2012. He was tough and effective in leading the line on his own; yet through the cup adventures of the past three seasons, Rory McArdle and Andrew Davies have faced up to more talented and mobile strikers. They easily won the battle here. McArdle in particular was outstanding all afternoon, not allowing a harsh booking to dissuade him from his full-blooded approach.

City produced minimal attacks in the first half, although hit the post themselves when a Gary Liddle cross evaded everyone in the box and bounced off the woodwork. Perhaps the occasion initially got to a few claret and amber players, as they were short of their fearless best.

Parkinson’s half time words allowed them to find greater composure as a collective, and the second 45 minutes belonged to them.

Filipe Morais – back in the team after a near three-week lay off – wasted a glorious chance after a cross came all the way through to him at the back post. The Portuguese had less time than he realised to control the ball, and his stab at goal was blocked. Still, it was an important moment in helping build City’s self-belief and firing up the crowd, and the players began to attack with greater frequency and purpose.

Indeed some good home football was produced in front of a vociferous Kop. Jon Stead found greater joy in dropping deeper for the ball, whilst James Hanson’s ongoing education of what is required to play wide left continues to bear fruit. Clarke, Knott, Hanson and Stead played closer together and produced some excellent link up play. James Meredith was outstanding on the left, providing a constant attacking threat and demonstrating incredible energy getting back into his defensive position.

Some promising moves were ended by a poor final ball – Morais was too often guilty of holding onto possession for too long – whilst other attacks were foiled by strong visitor defending. But the most important and commendable aspect was that City weren’t deterred or frustrated. The astonishing levels of intensity that were prevalent two years ago against Arsenal and co – and against Millwall, Chelsea and Sunderland this time around – were on full show again. All that was needed was to create one big chance.

At it happened, two big opportunities came – but both were passed up. First Stead got down the line well and crossed low for Hanson, who with a defender contesting him for the ball could only roll his sliding low effort wide of the post. Then from a free kick, Davies rose highest and headed the ball powerfully towards goal. It only narrowly flew over.

If you had to pick a goalscoring hero for today, Davies would have received my vote. Such a catalyst in the turnaround in fortunes of this club, but on a national stage the defender hasn’t received the plaudits that so many of his team-mates have experienced. Davies’ name was inches away from going up in lights.

Reading could not be discounted at the other end. Steve Clarke shuffled his pack, which included bringing on the formidable Nigerian international striker Yakubu. Yet tellingly the Reading boss did not increase the risk/reward trade off, sticking diligently to the 4-5-1 formation that had proven successful in nullifying the Bantams. Late on in the game, Liddle rashly gave away a free kick in a dangerous part of the pitch, and the ensuing set piece caused all manner of bedlam in the box. Yet somehow, the ball stayed out of Williams’ net, with the help of the post. 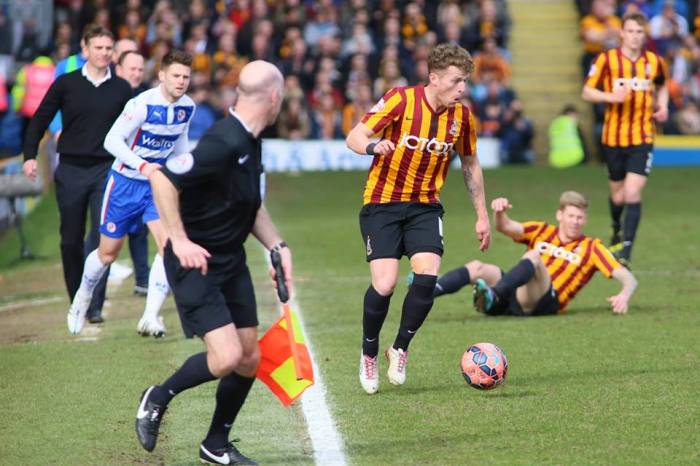 By stoppage time, it was clear that both teams had retreated and were happy to see the game out. It didn’t do much to ease the overpowering apprehension felt within all four sides of the ground, but in truth this was a game that neither team deserved to win. And so we will go again at the Madejski Stadium in nine days’ time.

Reading will understandably fancy themselves strongly, and there is a fear that City’s best chance of progressing has now gone. But as Parkinson reiterated in the build up to this game, this team doesn’t know when it is beaten. They’re not going to throw in the towel yet, not by a long shot.

The final word then, deserves to go to the atmosphere. We have been spoiled so much over the past three years that it was probably a bit sensationalist by some to declare this game the biggest of the lot. But Bradford City’s first FA Cup quarter final appearance in 39 years provided a real sense of occasion, one that will be long remembered for the noise and colour that was on show.

When the teams came out, the volume, the passion and the engagement of everybody holding up their Bradford City scarves was just incredible. I have never experienced a pre-match moment like it at Valley Parade. I could feel the tears in my eyes, and a lump in my throat. We could have lost this game 10-0, and it would have been worth it simply for that moment.

There’s no doubt that City fans will travel in their thousands to the replay, and the atmosphere is guaranteed to be electric. If you make the big decisions at Reading and you were here at Valley Parade, you’ll be keeping ticket prices low for the replay and trying to get your own fans to recreate this level of passion and noise.

We’ve had our share and then some, we’ve felt as low as it can possibly be about football and – one fateful May 1985 day – about life. And because we have suffered so many dark days, we make hay when the sun shines. We revel in the moment, and fully appreciate the good times.

We are Bradford City. We are special, even if it’s only in our own eyes. And it doesn’t matter what happens at Reading, we will continue to be this passionate and this proud about our football club and ourselves. We are having too much fun to worry that an exit from the FA Cup would signal an end to the greater adventure.

With special thanks to the amazingly talented Thomas Gadd for allowing us to use his brilliant photos. Please visit Thomas Gadd’s website for more details or here to view more photos of this game. 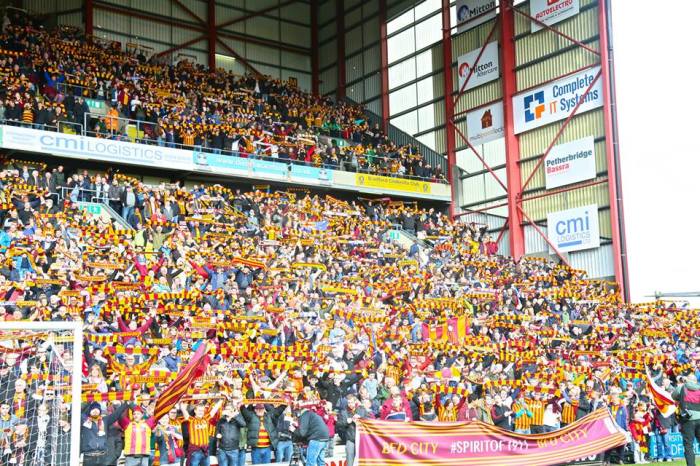 Like Loading...
‹ Bradford City vs Reading: The end of history?
The Reading Verdict: This tie is far from over ›