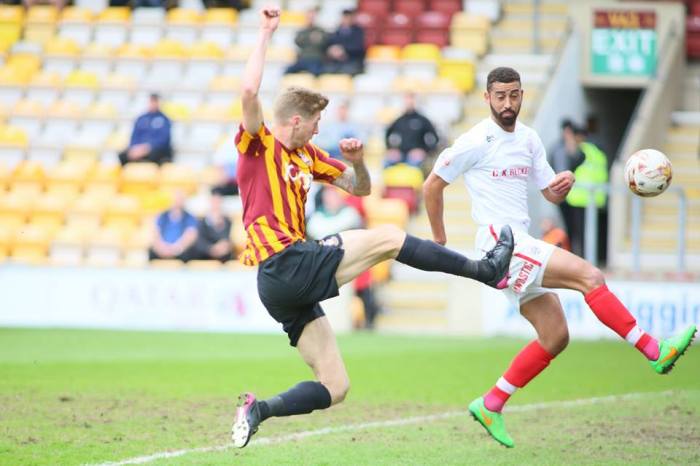 Bradford City are not going up but they are moving upwards. This first victory in six ensured the Bantams have bettered last season’s points total, and they need only a draw in the final game at Crewe to guarantee a higher league placing. Add in all of those cup heroics, and by anyone’s measure 2014/15 has been a season of progress – progress achieved on a reduced playing budget.

It could have been better, but many of us feared it could have turned out much, much worse. And though the considerable disappointment over a failed play off push still lingers, the recovery in form that has followed the abysmal home defeat to Bristol City is at least a source of comfort. For as fatigued and out of form as some players continue to look, they have kept going and delivered a happy ending to the home campaign.

What else, really, would we expect from a Phil Parkinson side? Time and time again over these past four seasons, the City manager has faced up to an adverse situation and displayed the leadership, composure and courage to turn it around. There have been bigger crises than losing 0-6 to Bristol City over his tenure, but few performances as bad.

In response Parkinson has tweaked a couple of things, gone back to basics and – after those three straight defeats where 10 goals were shipped – it’s now three unbeaten and only a couple conceded.

There was never any danger that Parkinson would treat a poignant occasion such as this afternoon as a meaningless end-of-season game. He may be an outsider, but since rocking up in August 2011 Parkinson has developed an intuitive understanding of the people of Bradford. Of our heritage, of our values. “Today is for the people of Bradford” were his words to the players as they prepared to march into Valley Parade in front of an emotionally charged crowd.

And those players put in a performance that the people of Bradford should be proud of. 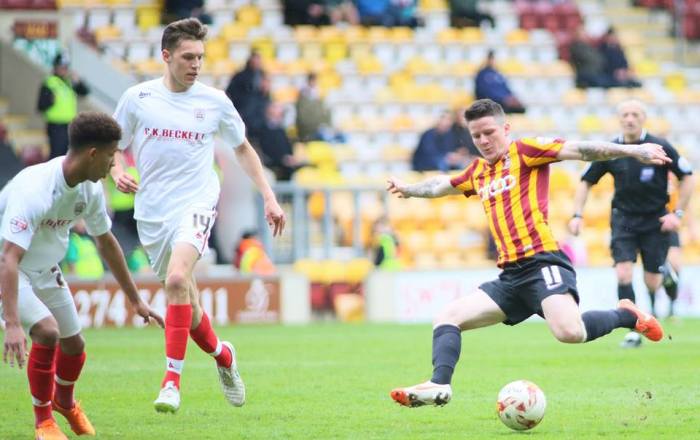 In a close-fought game, City always held the edge. It wasn’t a thriller, but end of season encounters between teams with nothing to play for always lack tension. It was a brilliant defensive display from the Bantams, who were superbly marshalled by Andrew Davies. And though the quality wasn’t always evident going forwards, they crafted out chances and produced one moment of magic.

That magic occurred in the 17th minute, when a superb cross from deep by Billy Knott was powerfully volleyed into the far corner by Jon Stead. It was a wonderful goal, conjured by two of City’s brighter performers of this campaign. It would ultimately prove to be the winner.

For Stead in particular, this was a timely reminder of his value to the team. Over recent weeks, Stead has looked more jaded than anyone and lacked the same intensity in his play. You almost forgot just how well he was playing mid-season, and what a talent he is. Since re-signing on loan from Huddersfield last October, Stead has demonstrated that he is so much more than a physical targetman. He has an intelligence, craft and vision that is rarely seen at this level, and today was his best performance in weeks.

All parties want to make his loan deal a permanent one, and it looks a forgone conclusion that Stead will be back in claret and amber next season.

For Knott, his perfect cross was a rare positive in an otherwise poor display. He is young. This is his first proper campaign of playing week in, week out. He has had dips in form, but overall should take huge pride in his first season at Valley Parade. Knott is a star in the making, even if the suspicion remains that Parkinson hasn’t fully figured out his most effective position.

Knott was played on the left of the diamond, with Chris Routis on the right and Tony McMahon central. This was as experimental as Parkinson dared to be here. McMahon was not an obvious choice for the holding midfielder role, but he was superb. Routis is less suited to wide right and didn’t reach the heights of his midweek performance at Scunthorpe United. Nevertheless, in the cut-throat battle for a future at City beyond next month, the pair’s performances of late have pushed them ahead of fellow squad players Andy Halliday and Matty Dolan.

McMahon was playing the holding role due to Gary Liddle playing as centre half – the future of Gary MacKenzie, after his Bristol City horror show, suddenly appears likely to lie away from West Yorkshire. Those who know Liddle best have told WOAP spies that his strongest position is centre half – a role he played at Notts County for a time – and he certainly looked the part here.

With James Meredith back to his best and Stephen Darby’s strong end to the season continuing, there was little prospect of a toothless Barnsley threatening an equaliser; even if Ben Williams once again looked hesitant on balls into the box. 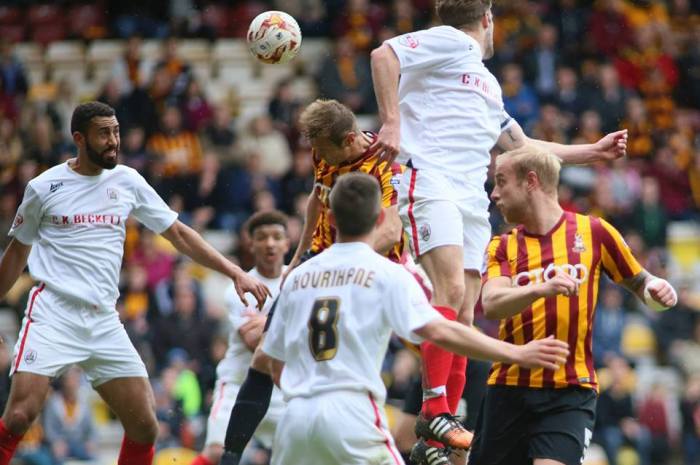 Indeed, City could and perhaps should have enjoyed a more comfortable winning margin. Routis missed two good opportunities either side of half time, whilst James Hanson should have done better with a long range effort from distance. Once again Hanson gave his all and bullied the visitors’ backline; but in front of goal, his confidence seems to have dipped again. A Hanson goal at Crewe next weekend would be a huge personal tonic, going into the close season.

In the end the Bantams hung on and hung on comfortably. The horrors of Preston and Bristol City were put to bed. And although City end their Valley Parade campaign with more defeats than wins, the long-term track record of Parkinson would suggest this is a blip. Besides, for what it’s worth – like Darby – home form did improve over the course of the campaign. Four defeats from the final 19 league and cup Valley Parade encounters isn’t terrible.

The post-mortem over where City feel short of making the top six will include the average home form (seventh-worst in the division), the number of late goals conceded, the absence of squad depth, and the lack of a clinical striker (City’s 54 goals so far is the thirteenth-highest in the division and – whisper it – is three short of last season’s 57). But generally these are fixable problems, and the prospects for further improvement next season look tangible.

At the end of another eventful home season, the positives of the last 10 months outweigh the negatives. Not least the continuation of the amazing spirit and atmosphere in and around Valley Parade – which is shared and enjoyed by management, players and supporters alike.

Everyone came together here to fittingly mark a day of huge emotions. As the football world bowed their heads alongside of ours, we first and foremost made sure that we did things properly by recognising the 56 people who tragically lost their lives at Valley Parade in our own special way.

We will never forget our past, and it continues to act as both a driver and an inspiration for the future.

With special thanks to the very kind Thomas Gadd for allowing us to use his brilliant photos. Please visit Thomas Gadd’s website for more details or click here for more photos of the game. 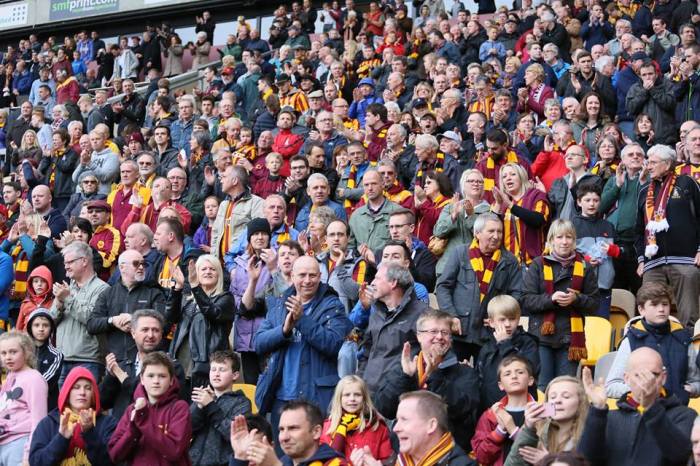