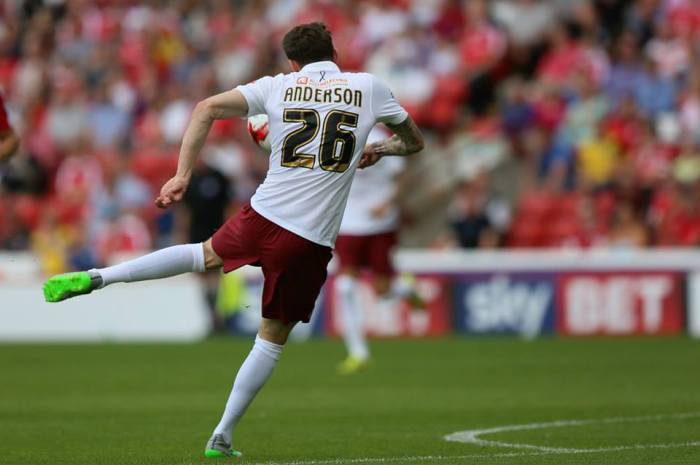 A curious talking point to last week’s home defeat to Gillingham was how the team were weakened by the first half injury to Chris Routis which saw Paul Anderson brought on as substitute.

It was not the case that Routis was playing especially brilliantly, but after the Frenchman’s exit they were hindered by the anonymity of Anderson over the subsequent 56 minutes. Some say that other players were reluctant to pass him the ball; others suggest that he lacks fitness. Even though both arguments are probably true, it is unlikely Phil Parkinson would have been happy with Anderson’s performance.

How did it come to this for Anderson? Just three months ago, the 27-year-old played a vital role in Ipswich Town’s promotion push. He played 38 times, and famously scored in the Tractor Boys’ derby play off clash against bitter rivals Norwich City. A good season was destined to end in pain and ‘if onlys’.

And here’s the thing: if Ipswich could only have prevailed in the second leg, and if they could have done to Middlesbrough what Norwich did to the Teeside club in the play off final, Paul Anderson would have been a promotion hero. He might have ended up a Premier League player, as the riches of the top flight offered manager Mick McCarthy more leverage to keep his players. Either way, as Anderson battled hard to get Ipswich promoted, he wasn’t to know that failure would lead to him being released.

And even then, a player that has strong Championship pedigree at both Ipswich and, earlier, Nottingham Forest would have reasonably expected to have spent the summer picking and choosing his next club. More than 250 career appearances, mostly at Championship level, should have ensured strong interest from second tier clubs. It didn’t happen, despite the fact he was clearly holding out for other offers; and so ultimately Paul Anderson has gone from would-be Premier League player to League One. In just three months.

When you think about it in those terms, perhaps it is understandable that Anderson has so far struggled to make an impact at Valley Parade. Having spent the best part of a year striving to reach the top level, Anderson must go again from an even lower starting point. It will take some motivating to get going again, and it might not happen straightaway. In football there is always talk of teams suffering play off hangovers the following season, and in Anderson here is a player with extra reason to feel this way.

All of which is not to question Anderson’s desire, or even to make excuses for his early Bradford City form, but it’s an always overlooked area amongst us supporters just what an upheaval and challenge it can be for a player to change football clubs. We see a new signing and we check their Wikipedia page for details of their career, and become excited by any notable achievements. We not unreasonably expect them to replicate, if not better, previous exploits, without considering the culture change that they will be getting to grips with.

A culture change such as moving to a completely new part of the country; which can often include uprooting your family with you. Finding a new job for your partner, and a new school for your kids. Locating somewhere decent to live, getting to know the new area, making new friends, trying not to miss your old life. Learning about a new football club, a new set of players, a new bunch of coaches, a new manager. It is a hazard of the profession, but still a major test of character. Some will adapt quicker than others. Some won’t adapt at all.

Luke James is a case in point. A young North East lad who burst onto the scene with Hartlepool, James made a relatively big money move to Peterborough at just 19-years-old. It was the first time he had moved away from his home – he was moving away from everything he had ever known. The move upwards from League Two to League One would have been tricky enough anyone without the off the field challenges he faced.

Apparently James struggled to adapt down South. He missed his family and friends too much. When he wanted to come home and see them, it would be too far to realistically travel – especially on a midweek evening (it will take you 3 hours and 43 minutes, in good traffic, to drive from Peterborough to James’ hometown of Amble, Northumberland). Again, he was only 19-years-old. That’s a tough test of character.

Bradford City could be the beneficiaries of this. West Yorkshire is not Northumberland but it’s a lot closer than Peterborough. James can feel more settled back in the North. And though a tough year at London Road has clearly knocked his confidence, it can be rebuilt over the coming months.

There are other factors about a transfer move that could affect other players. Josh Morris looked excellent in pre-season for City on the back of 18 promising months at Fleetwood. But how is he finding the pressure of playing in front of 18,000 supporters, with greater expectations? Mark Marshall thrived on Port Vale’s vastly wide pitch in the same way that his Jamaican compatriot Omar Daley always seemed to. Is his game hindered by the narrowness of Valley Parade? Is Tony McMahon frustrated at playing different positions each week? Is Nathan Clarke grappling with the fear that his best days are behind him?

These possibilities might contain a grain of truth, or they might be completely wide of the mark. But the point still stands. This has been a summer of major change at Valley Parade – much of it happening very late on in pre-season – and it is arguably not surprising that the new look squad is struggling to gel. A lot of new people have been thrown into a new environment together, and perhaps found that the expectations were greater than they realised. Some will thrive in time, some will fail. The number in the former camp vs the latter will probably define the season.

There is much that the club can do to ease such transition, and one hopes that Parkinson is mindful of it, and that he and his coaching staff are taking steps. At Valley Parade, the story of the Chilean Willy Topp – a 2007 Stuart McCall signing – is infamous. A non-English speaking player, moving to a new country never mind new City, was left to settle in a house within one of the worst council estates in Bradford, after the club reportedly placed him there. Little surprise that Topp never adapted to life in West Yorkshire.

Any new signing is an investment by the club – even free transfers involve a wage commitment – and so due care should be taken to make the most of the outlay. Every manager in the land will make bad investments and Parkinson is certainly no different, but the clubs that invariably get more right than wrong are those who understand that the challenges lie both on and off the pitch, and thus make provisions and allowances for them both.

The point is that no one should write off any new Bradford City signing just yet. Many of the most successful have endured slow starts: Peter Beagrie, Robbie Blake, Dean Windass, Claus Jorgenson, Jordan Pickford. But with time and patience, these and others delivered exceptional feats. The new guard can do the same.

If those who have recently joined Bradford City can adapt to the new surroundings, their undoubted qualities will ultimately shine on the field – where it matters.

Like Loading...
‹ Sharp Bradford City improvement, but one overriding issue remains unsolved
Social media: a curse or a blessing? ›