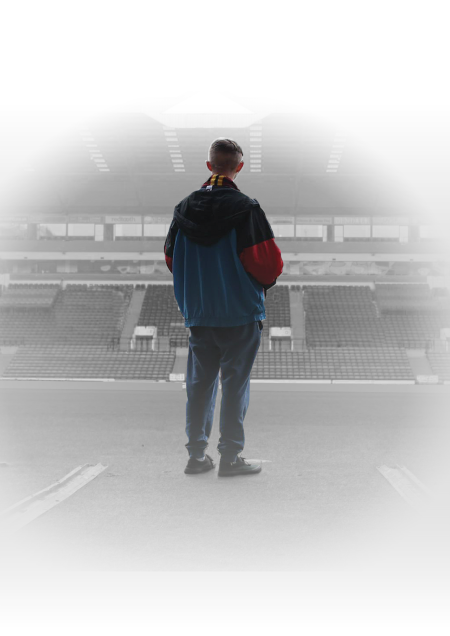 By Matt Woodhead (Artistic Director of LUNG) and Gemma Wilson, Co-Creator of ‘The 56’

For over a century Bradford City Football Club has proudly stood at the heart of the community.  Gemma Wilson, Bradford resident and co-creator of ‘The 56’, was born eight years after the Valley Parade fire on May 11th 1985. Fifty four Bradford City and two Lincoln City supporters tragically lost their lives. Bradford is understandably a city that keeps its grief to itself.

Gemma grew up going to matches in the rebuilt stadium where references to the fire were understated – there was an annual memorial service held in Centenary Square in town, a minute of silence at the last game of the season and a 30 second clip on BBC Look North, but publicly that seemed to be all.

Gemma and I went to the memorial service in 2014. After speaking to some of the people we met at the commemoration, we wanted to find a way of contributing the memory of the disaster – especially for a younger generation of football fans.  Aged 21, the thought of representing the stories of survivors, who were often twice or three times our age, was daunting.

Living with memories that are as raw today as they were thirty years ago, people were understandably reticent at the beginning of the process to trust anyone with their stories. As we began to build on our links within the community, word travelled fast and eventually over sixty policemen, firefighters, footballers and supporters came forward to speak about their experiences of the disaster.

After the first interview it was apparent that the only way this story could be told was verbatim – using people’s own words and nothing else. The true stories of survivors were more vivid and moving than any fiction. We conducted and transcribed over 100 hours of interviews and distilled the stories into three characters which represent a cross-section and act as a mouthpiece of the sixty people we met.

In the show the cast simply and honestly recount first-hand experiences from the day: the bald man who initially felt the fire as heat on his scalp before seeing it, the supporters helping each other climb the six foot wall from the paddock and onto the pitch, the policeman whose hair spontaneously ignited.

Some families lost two or three generations in the fire and many described the aftermath as a ‘city in mourning’ but from grassroots funding initiatives to the camaraderie on the wards of the Bradford Royal Infirmary, a theme that resonates is one of a community coming together.

Whilst taking part in this project, we have always wanted to make something that respectfully looks at remembrance, commemoration and the resilience of the spirit of the people we met. It is a testament to their strength that they trusted us to retell their stories in such a public way.

Their support and faith in the project has been incredibly humbling. This generosity led us to staging the show in the rebuilt main stand at Valley Parade to commemorate the 30th anniversary of the fire. Together we have also raised over £3,000 through ticket sales and donations for the University of Bradford’s Plastic Surgery and Burns Research Unit.

After a national tour, a run at the Battersea Arts Centre and two Edinburgh Fringe Festivals, ‘The 56’ returns to Bradford this May in commemoration of the 31st anniversary of the disaster.

Our performances will be dedicated to the memory of David Hustler QGM, a lifelong City fan who saved two lives during the disaster and who passed away last year, aged 76. David has been a very active supporter and contributor to ‘The 56’ and we are honoured to contribute to this vital legacy and continue to share these moving stories.

‘The 56’ was developed with The Lowry and The Civic in Barnsley and returns to the Alhambra Studio, Bradford for school and public performances from the 4-7th May 2016. Tickets available by bradford-theatres.co.uk or by calling 01274 432000

Like Loading...
‹ The Scunthorpe United Verdict: Hard-fought win sets up an emotional rollercoaster of a month
The mark of progress ›