A belated happy 50th birthday to the City Gent 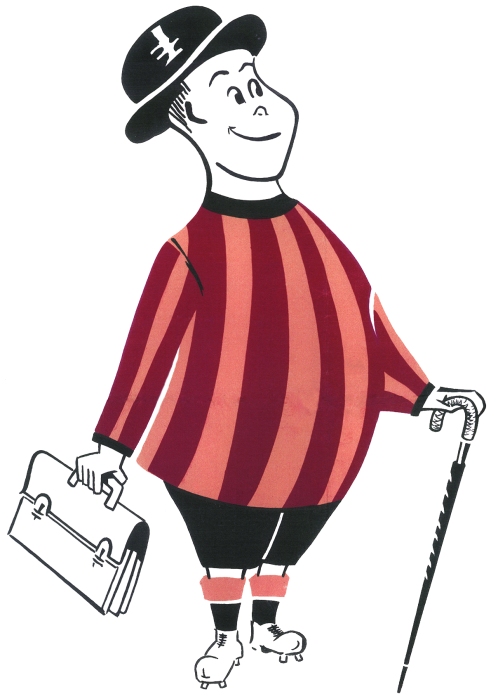 The City Gent character first appeared in November, 1965 and became a feature of the BCAFC programme cover from March, 1966 until the end of the 1973/74 season. For old git supporters like myself it became a firm favourite at Valley Parade.

Arguably it has lasted the test of time better than any other character introduced to English football during the heady days of World Cup Willy and England ’66. Possibly because Heginbotham was a ‘creator of cuddly characters’ – with his own business manufacturing stuffed teddies – he knew what would make a successful mascot for the club.

Stafford Heginbotham and George Ide had assumed control of BCAFC in October, 1965 at a time when the club was bottom of the fourth division. Anxious to promote the club and signal a fresh start, the board launched a new identity in conjunction with a programme redesign mid-season. The immediate impact was limited given that the club finished the 1965/66 season in second to bottom position and Heginbotham acknowledged his frustration in an open letter to supporters published in the Aldershot programme on 30 April, 1966.

Twelve days later the Wrexham fixture attracted a then record low crowd of only 1,353. Who could have imagined regular crowds of 18,000 fifty years later?

Nevertheless, a momentum for change had been established with a modernisation programme at Valley Parade that would include changes to the ground itself. During the next four seasons Heginbotham achieved a doubling of the average attendance from just over four thousand in 1965/66. This was the age of ‘City Gent Progressivism’.

The 1966 World Cup tournament in England had a major impact in the emergence of new identities among English clubs. The World Cup Willy character inspired the City Gent at Valley Parade. Reputedly a caricature of the then chairman, Stafford Heginbotham, it was introduced to Valley Parade in November, 1965 where it was used on posters advertising forthcoming games. The character later appeared on the cover of the club programme on 16 March, 1966. At the time Heginbotham was only 33 years old which explains the fresh face of the City Gent.

Given Heginbotham’s business background it is surprising that he didn’t make more of the City Gent character beyond its application on the programme, pennants or badges. However that was the full extent of merchandising at most lower division clubs for another decade. At Valley Parade the impact of the City Gent was in promoting a fresh start and Heginbotham could claim success, not least with the club’s first promotion in forty years in the 1968/69 season.

Beyond any doubt the City Gent character proved popular with supporters and it was the unanimous choice of title for the supporters’ magazine when it was launched in 1984. The City Gent was also a common choice for a tattoo design among a good number of fans but there was an alarming inconsistency as to how the character was depicted.

In the late 1960s BCAFC applied the City Gent on printed matter such that it served as the de facto club crest. This was as much a reflection of the character’s popularity as a degree of self-promotion by Stafford Heginbotham himself. How many other clubs had an identity so closely associated with their chairman?

The City Gent character symbolised a more modern alternative to the bantam identity that it superseded and the portrayal of a character with bowler hat and briefcase also implied that Bradford meant business (a slogan later adopted by the local chamber of commerce in conjunction with Bradford Corporation, to promote the city). It is quite possible that Stafford Heginbotham saw himself as the personification of a modern entrepreneur and hence the City Gent was also a narcissistic expression. Even Geoffrey Richmond did nothing similar.

Like Loading...
‹ The Walsall Verdict: Best performance of the season shows there is nothing to fear for Bradford City
The modern day story of Bradford City ›