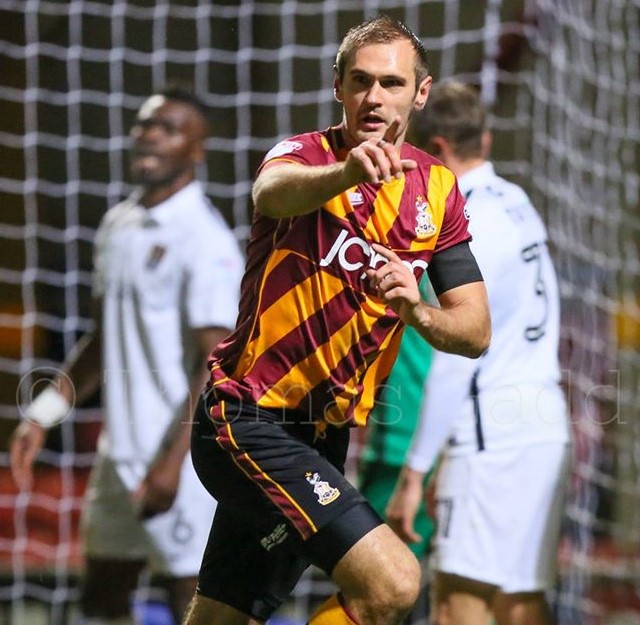 There’s only one Bobby Campbell.

On an evening where Bradford City fittingly paid tribute to the club’s all-time goalscorer and legend Bobby Campbell, it was the current No.9 James Hanson who scored the only goal as the Bantams grabbed a vital and hard-fought win.  It kept the unbeaten home record in tact but more importantly, kept City in the early four-horse promotion race at the top of the table.

There were a number of occasions where tributes were paid, starting with a pre-match video package along to the soundtrack of Elvis’ ‘Wonder of You’ to a warming applause.  Before kick-off there was another minute’s applause and Campbell’s family members touchingly laying flowers inside either goals and finally in the 9th minute, another minute’s applause, signifying the shirt number of the man himself.

City were both coming into the game on the back off only their second loss of the season at Southend and needed the win to get back on track and keep pace with the leaders.  Newly-promoted Northampton, who took League Two by storm last season amidst serious financial troubles, were also coming off the back of a defeat to Peterborough.

City made two changes from the weekend with Marc McNulty and Haris Vuckic replacing the injured Timothy Dieng and Jordy Hiwula being dropped to the bench.  Tactically, Vuckic was moved out to the right wing with Law in the centre and McNulty joining Hanson up top as McCall freshened things up.

The Bantams started the game brightly with most of the attacking play down the left with James Meredith assisting the pacy wing-play of Mark Marshall.  Nicky Law (the eventual and deserved Man of the Match) was holding the helm in midfield and throughout the game played a passing masterclass spraying some wonderful balls, particularly out wide to Marshall on the wing.

A couple of early chances ensued with Marshall blasting wide and a Hanson header straight at the keeper, but the opening quarter didn’t have much else.

The game’s first real talking point occurred just after the half hour mark with the Northampton keeper unnecessarily spilling the ball in the box, Hanson nipped in and seemingly was brought down.  If this was a good shout for a penalty, the next one just before half-time seemed even more stonewall.

The relentless City pressure continued and this time it was McNulty brought down by Northampton’s Zakuani inside the box, again no penalty.  The City players surrounded the ref in disbelief and the fans responded in anger accordingly with a chorus of boos.  My A-block Midland Road stand seat gave me the perfect view and I was in disbelief as most others were.  City were playing well and flooding the box with balls but just needed that goal to make the pressure count as we went into the interval.

The pressure continued in the second half with McNulty and Vuckic having early chances and Law dominating the midfield with his passing prowess, urging the troops to continue with the high-level pressing game to force the errors from the Cobblers.  It was then Law who came closest to breaking the deadlock on 53 minutes.  Marshall cut in on the right, laid the ball off and Law cut across the ball first time and his shot just clipped the corner of the upright.

And then moments later the deadlock was broken as City took the lead.  Northampton again struggled to clear their lines and Marshall chipped an inviting ball in the box for a free James Hanson to power a header home.  At last.  Another goal was needed and again most of the attacking play was coming down the left from Marshall.  As good as he was this evening and become reborn under McCall, there were some bad decisions where if he would have just been less selfish and looked up there was a simple, more effective ball to a player in space. But it’s only a minor criticism.

As the game went into the final stages, City got an early wake-up call from Northampton that this game wasn’t over.  A suicidal ball from Nathaniel Knight-Percival at the back let the opposition in and Doyle saved superbly from a Northampton downward header.  A further wake-up call occurred a few minutes before the end as a similar incident occurred  where again Doyle saved an excellent header but the ball spilled into the net – City were fortunate that this was given offside.

Cue the final moments of jitters as the momentum completely shifted to the Cobblers.  McCall brought on Rory McArdle for Cullen to shore up the defence and City (and the crowd) were anxiously waiting for the final whistle.  It came but it was hard work in the end and more tense than it should have been but three points and a clean sheet sent the fans home happy.

So, all-in-all not the most memorable of matches and the evening will probably (and rightly) be remembered for a different, more poignant reason.  A tribute to a legend.

There’s only one Bobby Campbell.

Like Loading...
‹ An open letter to the Football League’s Shaun Harvey
A toast to Edin Rahic and Stefan Rupp’s early successes ›