Home › Previews › Christmas previewed: The Bantams welcome in-form Scunny and out-of-form Bury at a crucial stage of the season

Christmas previewed: The Bantams welcome in-form Scunny and out-of-form Bury at a crucial stage of the season 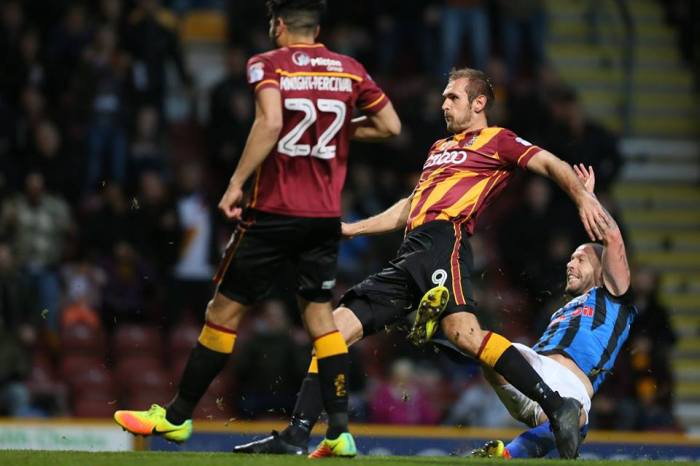 Boxing Day marks a personal milestone for Width of a Post – it’s our fifth birthday. We began life reporting on Bradford City’s 3-0 victory over Crewe at a time when the Bantams were struggling at the foot of League Two. You don’t need me to tell you that we’ve come a long way since.

Much has changed over these past five years. The mood, the landscape, and the outlook are transformed from the miserable underachievement we were enduring year after year. The lines of possibility have been withdrawn. The highs have been amongst the greatest achievements in the club’s history.

But fundamentally the basics remain the same – football supporting is all about chasing the warm glow of victory. There really is no greater feeling than cheering on your team to a win. And the buzz that comes with a particularly important triumph can last for days. And as Donald Trump might say, we’ve got used to winning big. Over the last five years, the disappointments have been far outweighed by the triumphs.

This Christmas period offers a major opportunity to experience a big victory. League leaders Scunthorpe United are at Valley Parade, and the stakes for both sides are very high. Scunthorpe have been the surprise pace-setters over the first half of the season, but are finding that Sheffield United and Bolton Wanderers are pushing them closely.  The two more illustrious clubs are in excellent form, which will worry the Iron. Especially as their fixture list over Christmas is very tough.

It’s going to be very interesting to see what Scunthorpe are about. The view around these parts – and, no doubt, around the rest of League One – is that the unfashionable North Lincolnshire side won’t last the pace. It seems a fairly ignorant forecast, especially as Scunthorpe’s form is far from flash in the pan. They had an excellent end to last season and were desperately unlucky to miss out on the play offs. They’ve carried it on this year, and remain the team to beat.

For City, top two hopes appear to be fading even though form isn’t particularly dreadful – the standards are just very high at the top. More pressing is the fact teams below the fourth-placed Bantams are edging closer. This Boxing Day tussle feels like a big moment in City’s season. The outcome could tell us a lot about what’s in store for the second half of the campaign.

The contrast between Scunthorpe and the New Years Eve opponents Bury is vast. The Shakers are in incredibly wretched form, losing their last 12 league matches after a bright start to their own season. When City welcomed them to Valley Parade in October for a Check-a-Trade trophy match, only one point separated the two clubs. Bury were third in the league at that point, but are now third-bottom.

Yet whilst much has changed over these five years, some bad old habits have been more difficult to shake off – City’s wretched record of losing to sides at the bottom and/or in dreadful form. Consider the fact our last home defeat – all the way back in March – was to a Colchester side winless in 19.

Put your picnic hampers away for this one. City habitually make hard work of easier games.

Key to a successful festive period could lie in Billy Clarke, who is racing to be fit after an injury a month ago has kept him out longer than expected. Clarke was in excellent form prior to his knock picked up in the Rochdale game, and his influence has been badly missed. It is a concerning pattern that Clarke is not the first City player to be injured longer than initially expected this season.

Without Clarke, Stuart McCall will continue to make James Hanson – the only survivor from five years ago – the focal point of the attack and try to find a striker partner for him to click with. Jordy Hiwula and Marc McNulty are more likely than Haris Vuckic to get the nod, and there remains a question of whether Nicky Law could be elevated to play in the number 10 role.

Such a move would be unpopular in one sense – it would lead McCall open to accusations of only playing one up front at home – but more crucially it would leave a big gap on the left side of midfield. Nicky Law has been outstanding in this position, linking up well with Josh Cullen and Timothee Dieng when cutting inside. His influence over the first half of the season is so strong you almost wish we had two Nicky Laws to pick.

But the issue with missing Clarke is that without him to play through City have become more direct. The ball is launched up to Hanson quicker, or worked into wide positions with the emphasis on crossing. In other words, the neat one-touch passing that saw the ball worked into the box has been lacking of late. It’s not as pretty on the eye, and more importantly it’s not as effective. City need their number 10, or someone who can perform the role.

In midfield expect Josh Cullen – who pessimistically might be playing two of his final games at Valley Parade – and Dieng to continue their impressive partnership. Mark Marshall will play on the right. He’s arguably not playing as well as he was in August-October, but his crossing ability is important to make the most of Hanson. Behind them Filipe Morais will be hoping for some game time over the Christmas period.

The defence continues to pick itself in the main, although Stephen Darby will be feeling Tony McMahon breathing down his neck. Romain Vincelot and Nathaniel Knight-Percival will need to be at their best against a strong Scunthorpe attack. James Meredith will continue to play a vital role at both ends of the field.

Colin Doyle keeps goal and can reflect on an excellent first half to the season. Not someone who commands the headlines; Doyle’s composure and assurance has nevertheless been really important and he has made big saves when needed. His calm personality has had a positive effect on those in front of him.

With Northampton away to come two days after Bury, the frantic Christmas period could go a long way to defining City’s season – or at least the mood around it. Because the other basic that has remained the same over the past five years of WOAP – and, indeed, the many years before we set up – is the negative feeling that we should be doing better.

It is only on those rarest of occasions that as a fanbase we are all united in satisfaction – there’s almost always a criticism and grumble of some type.

In a way it is healthy because as a club we should always be aspiring to be better. Being fourth in the league is a great achievement, but it’s no one’s idea of a pinnacle. What can be dangerous is when that negativity is allowed to take over and dominate the overall outlook. There have been many times over recent years that City’s form and league positioning has been far healthier than we valued it at. Sometimes we can lose sight of the bigger picture.

There is no question that the outlook is less positive than it was a month ago, which at the time was a dip on the month before. City were never going to go all season unbeaten and there were always going to be sticky periods, but the stop-start nature of league games over recent weeks has added to the impression that the season is losing momentum.

Right now McCall remains popular and rightly so, but a couple of poor results over Christmas could puncture the mood and damage the atmosphere. It is a slight concern that McCall’s second period in charge has some similarities to the first spell, when good starts to the season slowly faded.

We are nowhere near the worst moments of his time before and hopefully won’t go anywhere near them, but in the infamous 2008/09 big spending season City were also fourth in the league going into Christmas. That was the year when the Bantams missed out on the play offs.

That is the darker path that could easily be revisited, and that’s why the half way stage is a big moment. So much has been positive about the opening half to the season, but with form stuttering we could all do with a reminder of what has been good.

These two Christmas home games are big moments in the season, especially the visit of Scunthorpe. These kind of occasions always bring out the best of us supporters. The players can be assured of being backed to the hilt, and the atmosphere will be really special.

It is an occasion not to be missed. And there can be no stronger statement to make to the division – and to ourselves – than to get three points on Boxing Day.

Like Loading...
‹ The half season Verdict: New era begins in promising fashion, but still room for improvement
The first game ›