The plan began at birth. In amongst the endless stream of gifts that are bestowed on your newborn from friends and family, a Billy Bantam toy snuck in there. A baby vest with a Bradford City crest and the words “when I grow up, I’m going to play for Bradford City” was on immediate rotation. You want so many things for your daughter to achieve in life, but some seem to matter more than others.

Georgina was born 17 days after Bradford City had achieved promotion to League One by beating Northampton Town at Wembley. We were there for that historic day, Rachel brought along her just-in-case bag. Now, Georgina is three-and-a-half years old and the brainwashing is about to go up a notch. The Boxing Day visit of Scunthorpe United is to be her first ever game.

It had come along sooner than I’d planned. I’d always vowed not to take her until she was old enough to be able to form life-long memories. Five-years-old, perhaps. Over the years at City I’ve seen so many fans drag along their kids, who looked bored and underwhelmed by the Valley Parade experience. I’d heard plenty of stories of friends who took along their young children to football, only for them to have to leave before the game is an hour old because the young ones were so bored and restless.

Taking your young kid to the football seemed to be a risky business, especially with the stakes so high. A bad first experience could cloud everything. Trying to do too much soon could push them the other way.

And rightly or wrongly it seems harder with girls. At three-years-old, the differences between boys and girls is vast and they live up to all stereotypes. Georgina’s male friends are boisterous. They like to go around smashing things and making loud noises. Girls are more gentle and already deeply fussy about what they wear. One of Georgina’s best friends, a boy, got all manner of loud and macho toys for Christmas. Georgina got princess dresses and magic wands.

But what the hell, she seemed ready. Three-years-old is a magical age in my opinion, as kids seem to find enjoyment and excitement in everything. Their imaginations running wild. Their enthusiasm for life holds no bounds. When her best friend, Poppy, was taken to the Rochdale game and enjoyed the experience, the deal was set. It was time for Georgina to visit Valley Parade.

She likes football, at least playing it. Lots of daddy-daughter afternoons at the park, taking along a mini football, had built up her interest. And since September I’d been taking her to football training on Saturday mornings, which she largely enjoys – especially heading footballs. I’d bought her a first Bradford City kit at 18-months-old, and she loves to run around shouting “Bradford City – goal!” She recognises the club crest whenever she sees it. And a month ago I bought her a second Bradford City kit – she picked the white one as she liked it the best.

Yep, it was time.

Ever since she was born I’d thought about what her first game should be, and decided it had to be a big one. The atmosphere had to be good, and the crowd right behind the team. Of course you’d want it to be a game that City won easily, scoring plenty of goals, but how on earth do you guarantee that with City? So often when we play a lesser side, we manage to lose and the atmosphere is dreadful. The first City game I took Rachel to? The infamous 3-5 loss to Wimbledon in 2002. A case in point.

At this stage winning wasn’t important. I remember back to my first City game nearly 20 years ago, a 0-0 home draw with West Brom. The football was good, but the biggest memory of the day was being stood on the old terraced Kop, getting caught up in the chanting and supporting of your team. I wanted Georgina’s first experience to feature that type of positive backing. Getting behind the players if they were struggling, rather than groaning. Squaring up to the league leaders was that kind of occasion.

We got to the ground at the right moment – 2.50pm. Not too early that Georgina would be bored and too cold by kick off. As we emerged from the concourse and into our seats I made sure to watch her face. Her mouth was wide open in shock as she took in the surroundings. It was a bit too loud for her, and she was unusually quiet, but her eyes were still gazing around at the sights and sounds.

By five minutes into the game her hesitancy over the noise had faded and she was dancing along to the chanting. She was too young to get the words, but really enjoyed the noise and the drumming. Her particular favourite seemed to be the Josh Cullen chant. Mind, as a baby I used to serenade her in the evening with the Garry Thompson chant.

I was pleasantly surprised by how much of the game she actually watched. Her eyes would be glued to the pitch for the exciting moments in particular. Her understanding of what was going on surpassed my low expectations. 15 minutes in she was giggling lots, and when I asked she explained that the blue team (Scunthorpe) were “cheeky”. She enjoyed people heading the ball and the tussles for possession.

The first half flew by. It was a decent spectacle between two good teams. And despite the lack of goalmouth action she maintained her enthusiasm. After a half time break in the warm she took a little bit of time to get going in the second half, and for a few minutes took the hump with me for being too loud in cheering on the team. “Stop shouting daddy!”

But she was fine again in no time, enjoying being wrapped up in a blanket Rachel brought along. Only in the final 20 minutes did she struggle a little. But with the game itself far from thrilling at this point, this was understandable. We had brought along lots of toys and I’d downloaded TV programmes to my mobile in expectation of her hating being there, but we didn’t have to use any of them. She enjoyed hiding under her blanket during the final stages, only looking up when the crowd roar told her City were on the attack.

Supporting a football team is such a powerful bond to form with people. I know so many people who go to City with their mum/dad/grandparents/children, and the emotional journey they take together clearly makes those relationships all the more stronger. You care about the same things, and get to spend so much time in pursuit of that passion. It gives you a lasting connection that transcends the ups and downs of life. You are closer as people.

If Georgina doesn’t grow up to like football and Bradford City, that is of course more than okay with 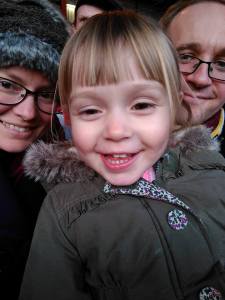 me. I’ll do everything I can to make sure we still have a special bond in other ways. But if we (and Rachel) can find some form of common interest in Bradford City and share a love of something that will always be there, we’ll have something powerfully special.

So the fact Georgina didn’t hate her first game, didn’t want to leave after five minutes, didn’t scream that she never wants to darken the door of Valley Parade again – it meant a huge amount. It is another step forward in hopefully developing a shared passion that we can enjoy together for the rest of our lives. Georgina isn’t yet City ’til she dies, but she’ll want to go again. That is massive progress.

At the end of the game we headed out of the Kop and without prompting she declared “that was a nice place”. I asked her if she enjoyed her day and she replied “yes, I like football”.

I think we can all agree with her verdict.

Like Loading...
‹ Christmas previewed: The Bantams welcome in-form Scunny and out-of-form Bury at a crucial stage of the season
Shoot for the moon ›