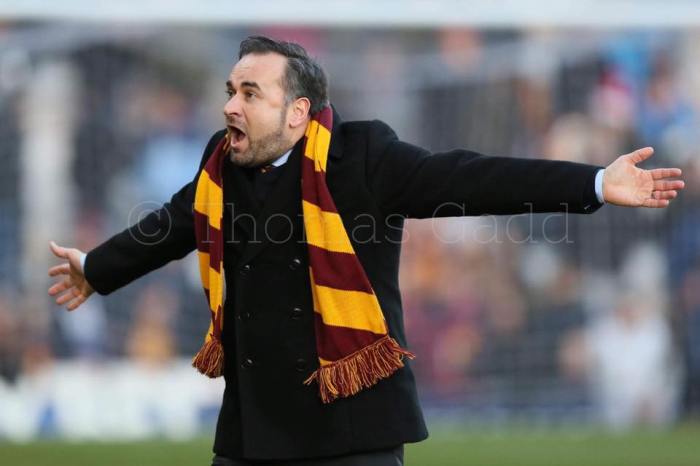 “There is money available if we are in a good position…We don’t want to be under pressure to sign someone because of (lack of) time.” These words, uttered by Edin Rahic 11 weeks ago, form a strong basis on which to judge the final week of the transfer window. They were a bold statement of intent about the joint-chairman’s vision for Bradford City. And the opportunity within the club’s grasp this season.

His business partner was equally striking. Stefan Rupp stated two weeks ago, “We are now on the edge. If we don’t reinforce, we could easily be in 12th place in two months’ time…What we are all urged to do at the moment is use the momentum. I think we will never be that close to being promoted, from an overall setting, than this year.”

Actions speak louder than words. And at what are still relatively early days in their tenure as owners, Edin Rahic and Stefan Rupp face one of their biggest tests. A month on from receiving a wonderful reception from City supporters as they paraded around Valley Parade pitch before the Boxing Day clash with Scunthorpe United, they need to prove they have the resources to support their grand vision.

The actions of this week – of selling the club’s longest serving player, James Hanson – have in the very short-term weakened the team. Moving on Hanson was far from planned, given Sheffield United’s transfer offer came out of the blue. But with no replacement immediately lined up, it represents a huge gamble. It risks stalling the momentum that Rupp rightfully cited.

“There is money available if we are in a good position.” City are 5th in the league and with a fantastic chance of reaching the play offs – the very definition of a good position.

The lack of goals remains a huge issue. No club in the top half of League One has scored fewer than City’s 34. Alex Jones is a promising signing who, when settled in, could help to address the problem. But after already letting go of Haris Vuckic, Marc McNulty and Vincent Rabiega, Hanson’s exit leaves City lacking in forward options.

Besides the tentative Jones, Stuart McCall can only call on Billy Clarke – who has just returned from a lengthy lay off – and on-loan Huddersfield man Jordy Hiwula as recognised senior strikers on the books. Mark Marshall proved on Saturday he can do a job up front, but is unlikely to score a hatful. Reece Webb-Foster is not yet ready for the pressures of leading the line.

Before Hanson’s departure, McCall was arguing that City need to sign another striker. So now they need to bring in two in the space of a few days. And one of them, at least, should be a statement of intent. A player who can genuinely hit the ground running, and make an immediate difference.

The Hanson transfer windfall should surely be used to strengthen the war chest. Expectations should be tempered – no one should be demanding City splash out £500,000 to £1 million on a player. But bringing in unknown players from the German lower leagues, or a loanee from a Championship club, would seem underwhelming. The January window offers limited options, but sanctioning the sale of Hanson means there can be no excuses.

If the season was to go backwards from here because of a failure to sign a striker, criticism will rightly be aired towards Rahic and Rupp. If City miss out on finishing in the play offs from this strong position, because of a lack of firepower, faith towards the owners’ ability to get City into the Championship and beyond will be weakened.

Go back to last summer, and a promotion push was hoped for but not expected. The first half of the season has caused expectations to climb. The excellent football produced by the team has eased misgivings some supporters held towards re-appointing Stuart McCall as manager. The strong performances from the new recruits helped us to buy into the new transfer committee approach. Promotion this season isn’t the be all and end all, but the comments from Rahic and Rupp upped the ante.

January is supposed to be the window of opportunity to build on all that has been good about Bradford City, and to address areas where improvement is needed. It isn’t supposed to be about becoming weaker, cost cutting or cashing in. Fail to replace Hanson and to improve the forward line, and the owners will stand accused of just that.

For the moment it is wise for us all to reserve judgement. Until that window slams shut, we can’t begin to assess whether Bradford City are in a stronger or inferior position than how they started this month. But make no mistake, selling Hanson has raised the stakes and shone the spotlight on the owners.

Rahic and Rupp’s words have been fantastic to date. Their ambitions and vision for the club are absolutely the ones that we can buy into. They have embraced the culture of what Bradford City is all about. Their values mirror our own. Rahic’s commitment in moving his family to England, and his obvious passion for the role, are hugely commendable. This feels like it should be a very exciting journey.

But this is a key moment, one where there they have to demonstrate they deserve our trust in their abilities. We watch on closely with keen interest, anxiously hoping they can prove themselves over these next few days.