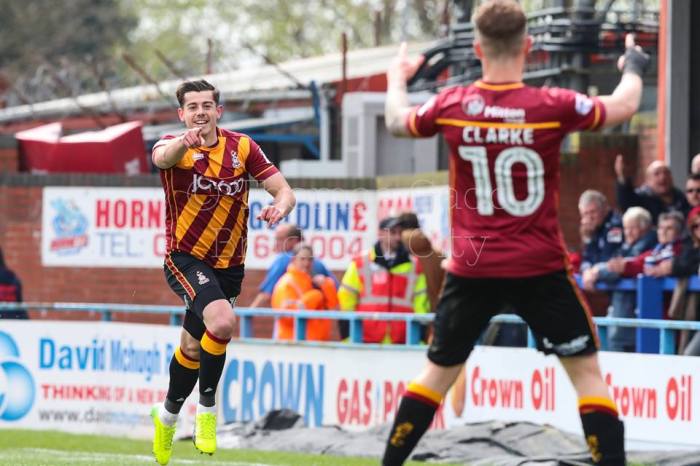 This was the best of both worlds for Bradford City. Stuart McCall was able to ring the changes by resting nine of his regulars for the play off assault that begins in just four days; and yet the Bantams maintained their integrity.

There was no lying down and letting Rochdale win. No favours afforded to the hosts. Dale’s rivals for the final play off spot, Millwall and Southend, would have no complaints about the level of professionalism displayed by City. Millwall – who sealed sixth place – didn’t need any help from City, but got it anyway. Rochdale will be playing in League One next season, whilst City can look forward to a play off semi final with Fleetwood Town.

They go into the two-legged battle in fine fettle. At Spotland they demonstrated genuine strength in depth, as a second string team acquitted themselves well and made it a difficult afternoon for Rochdale. The visitors took the lead early doors when Alex Jones finished expertly following superb work by Billy Clarke. It came seconds after Dale lost top scorer Ian Henderson to injury. Going into the three-way battle with Millwall and Southend two points behind the Lions, it was clear Rochdale needed to take an early lead to put pressure on the others. Jones’ goal left them with much to do.

With the greater incentive to win, and with the second best home record in League One, Dale were soon putting City under considerable pressure. But the revamped Bantams backline were excellent. Rouven Sattelmaier made his first appearance since January and was outstanding, producing a string of brilliant saves throughout the 90 minutes. The German has been unlucky not to feature more often this season, with Colin Doyle barely putting a foot wrong. This was another performance to underline his potential to be a success in England.

In front of him two of the club’s longest-serving players were equally strong. Rory McArdle was the only definite starter in the play offs who was risked here, and delivered an exceptional defensive masterclass. The guy just loves to defend and was in his element. Stephen Darby – in what is likely to be his last ever appearance for City – offered a reminder of how much he has to offer. He looked emotional applauding a packed out away stand at the final whistle. If this really is the end, Stephen, thank you for everything.

With Matt Kligallon slotting in fine after a surprise return from his long-term lay off – and Kevin Toner at least keeping going, despite numerous errors – City were a tough nut for Rochdale to crack. Matt Lund eventually found an equaliser with a quarter of the game to play, though City remained resolute.

Rochdale had twice the number of shots on goal, and corners. But the Bantams looked potent when they did attack. Jones, Clarke and Jordy Hiwula linked up well; although in the audition to start on Thursday alongside Charlie Wyke and Mark Marshall, Jones edges it. Like Kilgallon, Alex Gilliead made an unexpected return from injury and was a menace on the flanks. He will start the play off games from the bench but could prove to be a match winner. His return to fitness is a crucial piece of timing.

Danny Devine’s first league appearance since New Years Eve was a personal success, as he impressed in midfield. Timothee Dieng’s dip in end of season form continued at first here, but he looked stronger as the game progressed. There were second half debuts from the bench for Matthew Penny and Daniel Pybus. The latter showed particular promise.

Gilliead and Devine hit the woodwork either side of half time, whilst Joe Rafferty also smacked the post deep in stoppage time. Nathaniel Mendez-Laing was Dale’s best player and caused Toner lots of problems.

City were intelligent in the closing stages. They didn’t needlessly commit players forward, and protected the full backs from Rochdale attacks. It was smart game management that has increasingly been in evidence over recent weeks, and a welcome sign after the horrors of the last away game at Sheffield United. This team is capable of seeing out games, and that might be needed over the next few days.

The draw City gained here means they have matched last season’s fifth-placed finish, ending up just one point shy of Phil Parkinson’s 2015/16 vintage. Most notably, they’ve only lost seven out of the 46 – the least number of games defeated in a season since 1929. All of this on a reduced playing budget.

It has been an exceptional league campaign. The backdrop of a summer of such change and uncertainty has been talked about to death, but the excuses for a season of transition were there to be made. They’ve exceeded our expectations, made a mockery of worst fears, and now they stand on the brink of Championship football.

The play off tussle with Fleetwood throws up a couple of fascinating sub-plots. The Fleetwood striker, Devante Cole, has a point to prove. Uwe Rosler advised Edin Rahic and Stefan Rupp on their takeover of Bradford City, and was in the frame for the managerial vacancy caused by Parkinson’s departure. Considering the resources at their disposal, and the difficult circumstances of last summer, there’s a strong argument to make that Uwe Rosler and Stuart McCall should be first and second place in the League One manager of the year award.

20,000 City fans will roar the Bantams on at Valley Parade. The Cod Army’s average gate of 3,272 is the lowest in the league. These play off games are going to nervy, they’re going to be exciting and they’re going to be decisive. In a week’s time, Bradford City could be celebrating reaching Wembley for a third time in five years, or facing up to another season in League One.

It’s all on the line. A season’s hard work comes down to these next 180 minutes. But City go into them in buoyant mood.

Like Loading...
‹ The run-in: Rochdale away preview
The play offs previewed: past experience could provide players with an edge ›