Home › Opinion › The end of an era, as Rory McArdle leaves Bradford City

The end of an era, as Rory McArdle leaves Bradford City 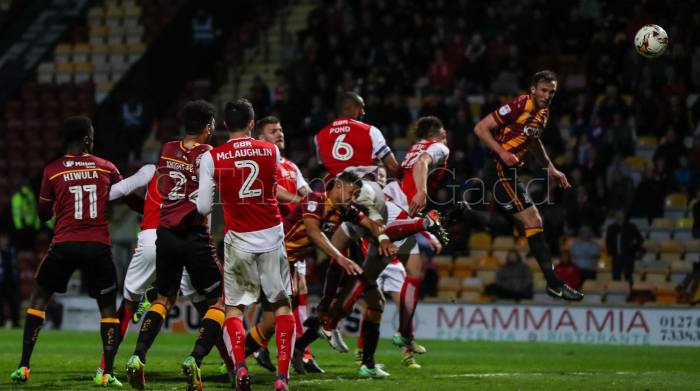 And then there were none. Rory McArdle, aptly, becomes the final History Maker to fall, in a move that likely loses gravity and shock value only because events became so protracted. It has been 15 days since news of Scunthorpe United’s interest in the (former) Bradford City centre half broke and today both parties concretised the speculation with a three-year deal. He follows Stephen Darby, James Meredith, Billy Clarke and Mark Marshall out the door, and that will be that.

It is difficult to decide where to begin for Rory McArdle – or even Rory McRory, the Slim Shady to McArdle’s Eminem, who emerges periodically to administer treatment to Sheffield United midfielders who have the temerity to enter his vicinity. Throughout City’s rise and rise over the past five years, McArdle has remained relentlessly visible, a scarily omnipresent figure in a backline that, barring its notable casualty in Andrew Davies, had until recently largely resisted the winds of change.

And for good reason. McArdle was a part of the joint-second best defence in the league last season, and an even larger part of the best defence in the league the season before. For four years, he has trotted on, unshakeable, with his typical full-bloodied thunder, no pretension, all of it embodied in what I hereby crown, definitively and categorically, the most iconic moment of his City career, slamming into Stefan Scougall in a (totally, totally legal) challenge, Wrecking Ball blaring in his ears, RKO out of nowhere, Scougall momentarily airborne, “I JUST CLOSED MY EYES AND SWUUUUUUUNNNNNGGGGGG!” Better yet was McArdle’s assessment of the incident, on the eve of the following season: “At the time, it didn’t really feel like he’d been flung. I just thought I’d kind of moved him out the way.”

Such understated grit was repeatedly endearing and the gusto with which McArdle threw himself into being Bradford City meant it had to be him, time after time. The world is by now well-versed in the nuances of ‘The Rory McArdle’: the jolt of anticipation when one first glimpses him slipping from his men and stealing towards the near post; the requisite hop and half-step, the slight angle downwards before he pulls off the crowning moment of his signature move, threading the ball with perfect accuracy through the eye of the needle. The net bulges and he wheels away, arms outstretched, tongue lolloping, hurtling himself – and City – towards infinity, towards the impossible, sliding into history he writes so easily, so instinctively. He pulls off the same trick time and again, like some bizarrely adorable copy and paste job, straight off the production line, crashing into headers until the sun sets, and still the kids cannot catch him. “Again, Rory! Do it again!”

Rory McArdle’s cult hero status aside – and there surely can be no doubt now that he joins the likes of Stuart McCall, Bobby Campbell, Wayne Jacobs, Peter Beagrie and co. on the pantheon of all-time Bradford City greats – more pressing is what this means for Bradford City’s transfer activity, in the immediate and longer term.

Scunthorpe offered better wages, but, crucially, a three year deal that, obviously, City weren’t prepared to match. If not always communicated, the club’s transfer strategy – although surprising in light of last season’s fifth-placed finish and McCall’s vocal and now clearly unfulfilled wishes to keep his squad together –  is obvious, and best summarised in nine words plucked from this (translated) German interview with Edin Rahic and Stefan Rupp: “creating a young team that stay together for years”.

Although a year old, that piece, even now, continues to provide the most illuminating insight into Rahic and Rupp’s aims within the medium and long-term. The word “brand” pops up, and, even, again, barring the caveats of translation, the desire for a style that is “modern, aggressive, with counter pressing” serves to form a relatively complete picture of a philosophy that they are now beginning to implement holistically and in earnest.

The question facing the board, in light of this overarching ideology, was whether McArdle’s face would fit into that ethos for the same three years he will now spend presumably as a key staple of Scunthorpe United’s defence. By the end of the same time period, Rahic and Rupp will want to have unearthed a younger centre back pairing.

Almost two months on from his 30th birthday, McArdle, one expects, would have been phased out at some point over the next few years. Nathaniel Knight-Percival is 30. Romain Vincelot is 31. Matt Kilgallon is 33. It is cold and overly-simplistic to reduce them merely to token experienced players during a period of transition, but Alex Jones has eight years on the youngest of the three and Charlie Wyke six. It is far harder to reconcile an obvious place in the bigger picture with the age of the three remaining central defensive candidates.

Even so, they are far from redundant – far, even, one hopes and assumes, from being phased out. Only this month did Tim Penfold underline the importance of the balanced age profiles of Bradford City’s two promotion teams; Rahic stressed two weeks ago that “there’s nothing to say we are just going to play with only young players and hope – no, we have a plan.” He uses the words “in the mix” but emphasises, “It’s a long-term plan. Otherwise the next season we have no resources and it’s crazy.” Such frugality is commendable but the obvious concern is that City will begin August 5th missing almost half of the Wembley starting XI that McCall was so keen to retain.

‘Consciously weakening’ is probably too harsh a criticism – at least until the window slams shut, as it does, devoid of the ability to close in any other way – but, still, it is valid to wonder if this approach is a) a gamble and b) likely to deliver a lower league position finish initially. This is a club that has moved up the Football League ladder year-on-year, going one better than last season’s sixth placed finish this time, having jumped from 11th to seventh in the preceding two years. They may have to move backwards, like a taut slingshot, before shooting off again. If that is the case, it will be surely have been calculated, albeit contrary to the linearity of the club’s movement – and mentality – beforehand. It’s not like twisting hasn’t paid off for this board already: James Hanson for Wyke has the potential to be a real masterstroke of movement, if it has not proven a worthwhile exchange already.

Jason McKeown pointed out in the wake of Mark Marshall’s exit that this activity comes as such a jolt because City have “largely waved goodbye to players because their value to the club has receded. City were leaving them behind, rather than the other way around.” City were hardly chaining McArdle to a chair in a darkened room in a bid to pin him down but the offer was there, even if Scunthorpe’s was more alluring. Nahki Wells aside, it has not, generally, been the norm to see City’s prized assets prised away. City survived their biggest two losses – Gary Jones and Andrew Davies – with little scarring. Even when leaving for ‘better’ teams, as in Hanson’s case, it’s been at City’s behest – at least willingness – as much as it has the clout and status of others.

It is at this point worth remembering that, for the entirety of last autumn, it looked like McArdle’s exit would follow the same lines as so many others’: trickling to a slow, gentle death, no longer a guaranteed starter, surplus to requirements, merely the latest casualty of a relentless upward trajectory. His talent and wholehearted nature meant he was unlikely to ever settle for a bit-part role, and he would leave in January, no hard feelings, handshakes all round, potentially sharing custody of Stephen Darby.

Only in the second half of the season did that scenario change and McArdle resumed his role as the last bastion old-fashioned defending, marrying his trademark verve and gusto  with renewed intelligence and guile, and topping his season off with the standard tongues out, guns out header at the near post in the play off semi-final. The most significant goal of the season aside, he had once more rendered conversations about his worth obsolete. Or so you would have thought.

Right now, the challenge for City is how seamless they can make the transition between ‘play off final runners-up’ and whatever the new age involves. It is an obvious point to labour but McArdle has been present in the three big carryover periods of the past five years, and simply ‘being Rory McArdle’ has been enough to ensure that the squad’s mental steel was never at risk. “I don’t think there’s anything worse than going out and not making the effort, not making tackles, not running around,” he told WOAP, in 2015. “When I used to go watch football, all you wanted to see from your team was eleven players giving it a go.”

He gave it that, halting his run to the near post, time frozen for all but one. Arms out, tongue out. Repeat, repeat, repeat.

Like Loading...
‹ Another Bradford City hero says goodbye, but everyone has to keep going
Gary Jones: “I get goosebumps now, just thinking about Bradford City” ›