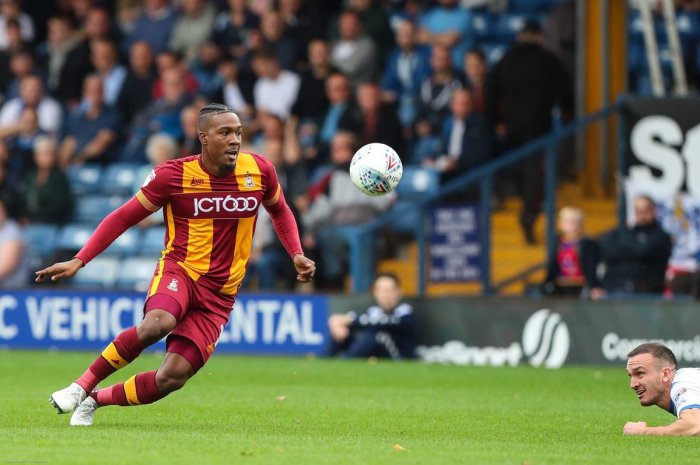 Matt Kilgallon was in a thought-provoking mood as he talked to the Bradford City local media at the back of Bury’s deserted main stand, half an hour after the end of this eventual League One encounter.

Whilst agreeing City had been a little unfortunate to fall to a first away defeat of the season, given they created several second half chances to overturn a 2-1 half time deficit; the experienced Bantams defender was critical of some of his team mates, and the gung ho nature they operated. Going 2-1 behind to Bury behind midway through the first half was a shock given City had started the contest strongly, but there were still three-quarters of the game left to turn it around.

Yet what Kilgallon rightly observed was the situation needed cooler heads and a more measured approach, as opposed to an over-attacking City style that saw full backs push up the park and the ball hurriedly rushed up the field without enough thought paid to quality. At times City played as though the clock was running out, rather than remembering time was still on their side.

Kilgallon said on instances when City are trailing, “We always believe we can come back, but I think personally when go a goal down we’re going a little bit too gung ho. Maybe leaving ourselves a bit too open at the minute, when we’ve got time. You know we’re 2-1 down, but there’s 60 minutes left. But our full backs have gone and you turn it into a tussle up top.”

Kilgallon argued that the team stopped passing the ball around Bury, after starting off doing so effectively. He continued, “Sometimes we just need to believe how good we are, get the ball down and just play. We still want to play with a tempo, but there’s still time so let’s use our nouce a little bit. Keep the ball and tire them out.”

It is a valid argument that applied not only here, but was noticeable in their two previous defeats this season – the home matches against Blackburn Rovers and Fleetwood Town. In each game City conceded the first goal and attempted to push hard for an equaliser, only for their play to become a little too direct and the attacking play lacking cohesion. In these situations the commendable levels of self-assurance, seen so often over these opening weeks of the season, dropped down a couple of notches. They couldn’t come back.

This was the only the fourth league game this season where City have fallen behind. Yet in only one of these occasions – the 2-2 draw at Oxford – have they been able to overturn the deficit. It’s still too rare of an occurrence to suggest there is a major problem in terms of how the team cope with the pressure of trailing in a match. But it’s certainly a record that will have to be improved on if a promotion challenge is to be maintained.

City have been so consistently strong out the blocks this season, and it was the case again at Gigg Lane. Luke Hendrie’s first outing, covering for the influential Tony McMahon, began with an assist that City’s longest-serving player would have approved of. Charlie Wyke found that crucial inch of space, and finished emphatically. What a talent the Bantams’ number nine is.

But a highly debatable penalty – where minimal Hendrie contact on Jermaine Beckford sent the ex-Leeds striker theatrically stumbling to the deck – and a scrappy second goal just a minute later turned the game on its head.

Bury – with only one win since the opening day of the season – had at 1-0 down looked on the brink of falling to pieces. After Beckford’s intervention – he scored that Bury second – the home side visibly grew in confidence. They had City where they wanted them.

The 5-3-2 approach, with Chris Humphrey and Greg Leigh as wing backs, caused the Bantams problems. Hendrie and Adam Chicksen were doubled up on at times. The target man Michael Smith was a menace, winning everything in the air. Chris McGuire floated in a free role behind the strikers, and proved tricky to pick up.

The first failing for the visitors was their inability to raise the tempo again before half time. The City midfield was poor by their usual standards. Alex Gilliead looked hesitant and guilty of poor decision making. Nicky Law failed to make decent use of the ball. Jake Reeves making mistake after mistake. City’s number four seemed to be trying too hard. It’s always a good sign to see a player who is under-performing still demanding the ball rather than going into hiding, but nothing went right for Reeves. He was correctly withdrawn during the second half.

And it was during those second 45 minutes especially when Kilgallon’s post-match challenge was merited. Bury weren’t subtle. Flying into any challenge in the middle of the park. Happy to concede free kicks just to stop City from getting up a head of steam. When they could, Bury did everything to slow down the tempo. The home players worked very hard off the ball.

It all meant that City couldn’t get going, but they didn’t help themselves by playing endless long balls or crossing from too deep. At times when they did play it around in the middle, too many players positioned themselves in front of the ball rather coming short to provide an option. Such an approach makes sense when there are 10 minutes left, but not when there was still half an hour to play. They need to be smarter.

Like Uwe Rosler a couple of weeks back, Bury boss Lee Clark kept on two strikers despite his team defending a slender lead, and that always left them with a threat on the break. So after riding their luck with Dominic Poloen having two shots blocked, Chicksen’s free kick pile driver being tipped over, and Romain Vincelot amazingly missing a hat trick of free headers, Bury finished the job.

The third goal summed up City’s imbalance, as Hendrie needlessly gave the ball away to Leigh just outside his own box, with City players having pushed up the park expecting a long pass. Bury were able to counter attack in numbers, with Jay O’Shea forcing the ball home. As City continued pushing to the end, a fourth Bury goal on the break seemed likely.

This wasn’t a bad City performance, but it wasn’t great. They found themselves in a hole through a combination of poor refereeing and defensively switching off a minute later. There is no questioning the team’s courage and commitment to try and come back – most players under-performed, but they didn’t lack effort – yet in game management could be better.

Stuart McCall’s body language and demeanour was positive as he spoke to the media with Kilgallon after. He was keen to emphasis there would be no panic or over-reaction within the dressing room, and that they would quickly move on and be ready for the midweek visit of Oldham. The team’s response to set backs has been good this season, offering reasons to be confident when setting foot into Valley Parade on Tuesday. After the heat of the battle is over, they know how to get over set backs and quickly go again.

But just like two years ago in Phil Parkinson’s last season in charge, there are questions over City’s in-game management that still need to be resolved. Back in 2015/16, the team would usually respond badly when it fell behind. And in only a handful of instances were able to turn a losing situation into victory. And when they played Millwall in the first leg semi final at Valley Parade and a good start had turned sour before half time, that lack of in-game management came to the fore, as the players were unable to recover from a sticky spell.

Hopefully, the current lot are made of sterner stuff. But if Oldham do go 1-0 up on Tuesday, it will be a test of character that – so far this season – City have struggled to address.

Attacking, gung ho football is creeping into the Bradford City DNA. The owner, Edin Rahic, has been plain from day one that he wants City to take attacking risks rather than playing conservatively. The manager, McCall, has an coaching philosophy that aligns to these values. He will always set up his team to outscore the opposition rather than to stop them.

This gives the players licence to express themselves and to be bold. But it also requires them to use that freedom responsibly. To stay calm, and to have greater belief in their own abilities to turn around a difficult situation. The manager is clearly doing a great job preparing them before the game, but there is only so much he can influence in the middle of a match that is starting to slip away from them. Players have to step up.

Football is a 90-minute game, and City need to start demonstrating their own-the-field ability to cope with inevitable moments of  adversity.

Like Loading...
‹ Dean Windass: “You could go right through Paul Jewell’s Bradford City team and there were no weaknesses”
A wise(r) head continues to push Bradford City forwards ›