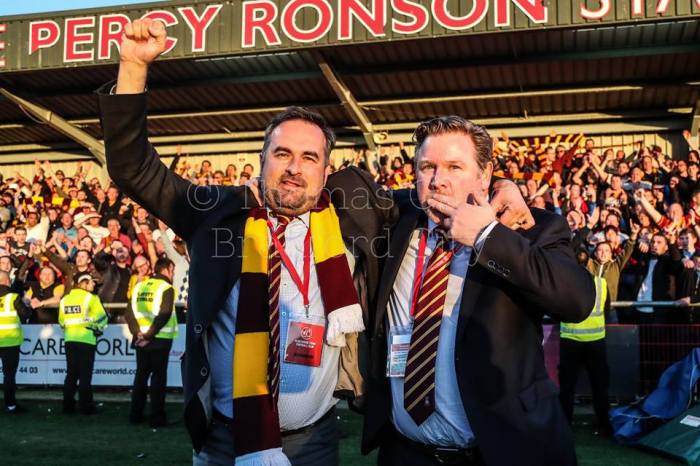 Midway through Matter of Heart, the behind-the-scenes film about Bradford City’s memorable 2016/17 season, head of recruitment Greg Abbott sums up what it’s like to work for Edin Rahic. “I’ve never been asked so many questions in my life…He wants everything yesterday.” It is a neat summary of the passion, drive and eye for detail that the German owners have brought to Valley Parade since they purchased Bradford City back in May 2016 – made abundantly clear during this absorbing film.

Matter of Heart was the brainchild of Rahic, brought to life by the talented director Franz Stefan. “For me it was very emotional,” Stefan told me with a beaming smile, minutes after the premiere of Matter of Heart has concluded with a crowd of 200 people breaking out into applause. “I’ve shown it to some experts in Germany, but they don’t know Bradford, the club and the story. It’s another thing to see it here and all the fans, the team and manager watching it.”

“The best football film I’ve ever seen” says one of the invited guests on the row behind me in Pictureville Cinema at Bradford’s iconic Science and Media Museum. Similarly positive sentiments can be heard throughout the bar area outside at the after party, where Rahic and his co-owner, Stefan Rupp, plus Stuart McCall, Greg Abbott, James Mason and several players mingle with club directors, sponsors and supporters. At one point Rahic, Rupp and McCall are locked in a three-way, smiley conversation near the bar. Conspiracy theorists look away now.

Not that the film shies away from exposing the tensions that have been prevalent at Bradford City since Rahic and Rupp’s arrival. The film demonstrates the pair’s evident pride owning the club, the confidence they feel in their vision and their clear commitment. They both talk about staying for years rather than months, with Rupp going as far as to joke about not retiring until City win the Champions League. They come across as smart, intelligent and understanding that it will take time to achieve their goals, but the juxtaposition lies in the fact they are clearly impatient for success and don’t shy away from being fiercely ambitious in the here and now. They put their employees – on and off the pitch – under an awful lot of pressure. They want the best.

At one stage, we see Rahic angry over the fact City have drawn rather than defeated Millwall at home in January 2017. Later on, Rupp admits his partner has upset certain people who work for the club because of his relentless questioning and need to know the detail behind everything. Rupp also states that they have a manager who doesn’t always want to listen, while McCall reveals he has found it difficult to adapt to the owners’ way of working. There’s a scene where McCall is taking training whilst flanked by Rahic and Rupp. Such a hands on approach, it is pointed out, is the opposite of the previous owners, who left their manager to manage everything. (Though Peter Jackson may dispute this.)

But as Rahic argues early on in the film, he does have the background and the knowledge to justify his leadership style. A promising footballer himself before injury ended his career at 21, Rahic has significant football experience, working as a scout and later board member for Stuttgart Kickers. He has set up Bradford City’s transfer committee strategy. The film showcases how it is driving player recruitment rather than the traditional English model of leaving it all to the manager. We see scenes of the committee watching videos together of potential transfer targets and deciding who to sign. Sometimes it’s just Rahic and Abbott meeting up; at others McCall and Mason are present too. There’s no doubt McCall has a strong say, but not the absolute final decision.

Whilst McCall is not the focus of this film, his renowned man-management skills still shine through. Dressing room footage of one of his half time team talks stirs the heart, and there’s plenty of clips of him directing matters on the touchline during games. McCall’s role in a memorable season should not be forgotten, especially six months on and with the club’s current on-the-field dip in form.

Abbott is one of the stars of the film. His dedication, desire and passion for Bradford City is obvious. Outside Wembley we see a clip of him welling up as he thinks about what victory in the play off final will mean. “It was the first time I had watched it, I refused to watch it until tonight,” Abbott tells me as we chat about the film afterwards. “It’s absolutely real. A lot of truth. A lot of honesty. A lot of things that people might wonder ‘wow’. There’s some questions and some debates to go on after that. It was really, really honest.”

And what does Greg think of the way he, Edin, Stefan, Stuart and James work together? “I think you’ve got some strong characters there. Everyone’s got an opinion about the game. Everyone’s got a genuine affinity to the club. Everybody wants the same end result. Getting there is always going to involve different opinions, and you’ve got to manage those opinions.

“We’ve got a respect for each other where we can offer different opinions. It’s not about who’s right and who’s wrong. It’s about throwing those opinions together and coming out with the right decision at the end of it.”

One of the most insightful parts of the film is the January transfer window, where we see the owners and transfer committee mull over whether to sell James Hanson. There are some interesting revelations in this section that do not paint Hanson in the best light, making it clear that he wanted to go, and the owners felt backed into a corner. If there’s a criticism to make here, it’s the failure of the film to add the balance that the club hadn’t shown any great indication they were going to offer Hanson – out of contract in the summer – a new deal. Ultimately, can anyone blame him for going? We see the transfer committee decide whether to sign Charlie Wyke, and then his spectacular burst onto the Valley Parade scene which demonstrates the success of the transfer gamble taken. “Everyone was a winner,” Abbott later reflects on camera of the Hanson-Wyke saga. “Well, apart from Carlisle.”

Ultimately, Matter of Heart leaves you feeling warmer towards the owners and what they’re trying to do. Rupp begins as something of a silent business partner with no great interest, but midway through admits he has caught the bug and is clearly in love with Bradford City and the project. Just how 100% authentic the film really is can only be answered by those who work within the club alongside the pair, but either way it is a clear statement from the owners about who they are and what they stand for.

Rahic and Rupp pair have great chemistry and the language barrier doesn’t hide just how articulate and clear they are in their grand vision. They’re also both very funny people. They have notable charisma, and it’s to be hoped the release of this film will encourage them to speak more often in public.

Rupp in particular has barely spoken to the media since funding the acquisition of the club. As the premiere after party begins to wind down I grabbed five minutes with him for an interview, “It’s been incredible,” Rupp says about owning the club. “We’re still on the upstream, but  there is still a lot of things we have to change – infrastructure, organisation. Most work is not the football business itself, it’s the supporting business.

“We need a new ticketing system, we need a new commercial system. We are building up social media and marketing department at the moment. The youth development as well of course, which costs a lot of money. We have invested a lot in training the team and the environment.”

And what of his affection of the club? “At first it was an investment, but it soon became a matter of heart. You cannot turn away from Bradford City!

“This club is so deep in the heart and the soul of the people here, and you have to be very sensible and respect this. If you’re not able to do this, you should turnaway. That’s how it is. But I think we have found a good way in coping with that. We have been quite sensible and not tried to put the German stamp on everything.”

Matter of Heart is revealing, emotional and inspiring – and above all else it is incredibly beautiful. Franz Stefan and his team have done an astonishing job capturing the essence of the club and just what it means to the people of Bradford. There are so many incredible shots of Valley Parade – both on a packed out matchday and during the week. They’ve also gone out into Bradford itself and filmed so much of the splendour of the city. It can be so hard to tangibly bottle up the passion and dedication of Bradford City supporters, but they’ve managed it in spades. Franz Stefan concludes to me, “I think this club is unique. There’s a wonderful atmosphere. I have goosebumps when I’m in the stadium. I think it’s totally different and real football.”

As a Bradford City fan, watching Matter of Heart makes you feel so proud of the club you love. And I imagine that if you don’t have any leanings towards Bradford City before watching, you will begin to develop affection for the club after sitting through it. “We’re different. We’re a working class town that’s very proud of our city,” states Mason during the film. Matter of Heart does a remarkable job of showcasing exactly what makes this club so special.

Like Loading...
‹ The Width of a Post podcast: Episode 12
Gary Jones: “You’ve got to be a certain type of player to play for Bradford, to handle it” ›