Home › Opinion › The right way to win (and lose)

The right way to win (and lose) 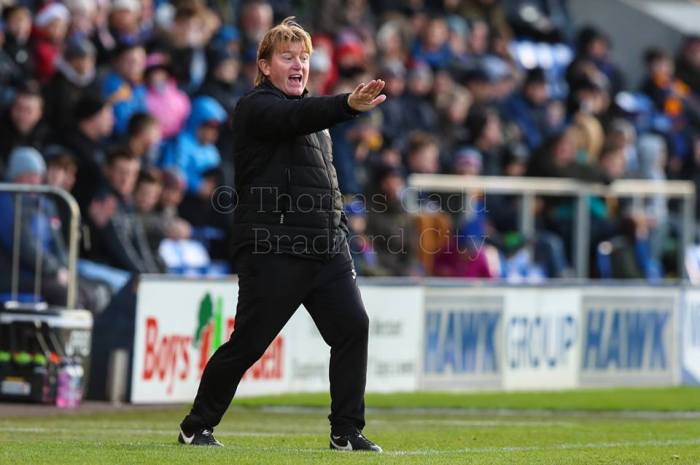 The final half hour at the New Meadow encapsulated so much of what is good – and what is missing – in Bradford City this season.

Fortunate to be 1-0 ahead after Shrewsbury Town defender Aristote Nsiala turned Alex Gilliead’s cross into his own net, the Bantams produced an outstanding rearguard action to earn a clean sheet and three unlikely points. They toppled Shrewsbury – unbeaten at home until now – off the top spot of League One, after withstanding considerable pressure.  It was another brilliant defensive display from City. Another remarkable victory.

And yet as proud as manager Stuart McCall felt in the dogged determination of his players, he will also be left wondering why they can’t play as well as Shrewsbury did when they themselves are chasing a game. Just four days earlier, Scunthorpe United had fortuitously gone 2-1 ahead at Valley Parade in a contest that, up to Hakeeb Adelakun’s free kick, City had bettered. The response from City was poor as they looked hesitant and tentative in trying to come back.

They never built up a late head of steam in the way Shrewsbury did against them on Saturday. They looked a beaten side long before the final whistle sounded. They lacked the nous and self-assurance to exert heavy pressure. Scunthorpe were too comfortable. They set up for the counter attack, kept slowing down the tempo and dominated their own penalty area. But City made it too easy for them.

Something that Shrewsbury couldn’t be accused of as they laid siege to City’s goal. Town kept varying attacks and remained unafraid to pass the ball through midfield and outwide. Several chances were created, and some miracle goalkeeping and last-ditch defending was required from City to preserve their lead. Shrewsbury might have lost, but I doubt many home fans were feeling underwhelmed by the way their team kept knocking on the door. Ultimately, they did everything but score. It was the right way to lose.

The problem for City this season was that the timid response to being 2-1 down against Scunthorpe United on Tuesday was no one-off. It is a damning statistic that only once all season have they recovered from going behind in a game – the last minute Romain Vincelot header at Oxford in September, which earned a useful 2-2 draw. City heads haven’t always dropped in response to going behind, but they have often lost composure and chased the game in a frantic manner. They seem to forget – or abandon – the style of play that has made them successful. A lack of belief in each other, and in themselves.

The last 10 minutes against Plymouth, and response to going 2-1 down against Scunthorpe, suggests the situation is getting worse. That’s why McCall might just be tempted to sit down his players this week to rewatch the final 30 minutes at New Meadow, as an example of how it should be done.

And if he does, as well as making the point about how a good team should react to adversity, the City manager can retake the opportunity to praise his players for just how well they performed under the cosh. It was a superb defensive performance against Shrewsbury, as League One’s best home side were thwarted. An amazing goalmouth scramble in the final minute of stoppage time, where City threw bodies at the ball to block several attempts, personified their bravery.

Matt Kilgallon was outstanding, further cementing his status as the runaway leader in the player of the season awards, whilst alongside him Nathaniel Knight-Percival and substitute Adam Thompson were equally colossal. In the full back slots, Luke Hendrie continues to prove a revelation playing on the left hand side. He was given a really tough examination by Shrewsbury’s talented right winger, Shaun Whalley, but stuck to the task manfully. Tony McMahon’s steady improvement also continued. The rhythm returning to his game after a rusty return from injury.

And in Rouven Sattelmaier, City had a match-winner between the posts. The German deputised for the injured Colin Doyle, and produced a pair of stunning saves to deny Carlton Morris and Whalley. Sattelmaier’s shot stopping ability has never been in doubt – though questions have been raised over his distribution and composure. At the New Meadow, he was accomplished in everything he did. With Doyle out for several months, a run in the team beckons. Keep playing like this, and the 30-year-old might just retain his place when the Republic of Ireland international is fit again.

With the defence playing so well, City were able to win in spite of forward players being below their best. Once again Paul Taylor is the man making things happen. The spark to ignite the rest of the team. He is enjoying playing in the free role behind Charlie Wyke, and it particularly suits away games like this.

Back at Valley Parade – and as demonstrated on Tuesday – City really need another striker to play with Wyke, in front of Taylor. But to do so risks midfield being outgunned. It’s a difficult dilemma, but on current form the City attack has to be built around Taylor.

In midfield City were once again ordinary. Nicky Law couldn’t build on an improved midweek display, giving way to Tyrell Robinson shortly after half time, who did a very good job for the team in the closing stages. Romain Vincelot and Jake Reeves remain out of form but battled hard. Neither are afraid to get on the ball or to put in a tackle. Hopefully their old verve will return, allowing their undoubted qualities to shine.

Alex Gilliead ultimately won City the match with his cross that set up the own goal, following an excellent Wyke flick on. Gilliead is that rarest of beasts in the City team this season – a player with the ability to go past people. In home games especially when the Bantams have looked static in their movement, they need more players willing to take people on. That’s why Josh Cullen and Mark Marshall are proving to be such big misses. Robinson will run at people. His rawness makes it understandable why he is being held back, but it surely isn’t going to be long before he is starting games.

Ultimately City look well set up to keep winning tricky away games like this. They are generally a good side when they don’t have the ball – an improvement on last season – but lack the spark to break down teams at home who are happy to let them dominate possession. Wins like this underline their automatic promotion potential, but the disappointing final 20 minutes at home to Scunthorpe hint at why it might be play offs at best for City.

23 points from 10 games on the road is outstanding. They are only two wins short of matching last season’s entire total of nine away victories. But just 13 points at Valley Parade – the 18th-best record in League One – is undermining this exceptional work. Five defeats in the last nine at home. The five Valley Parade losses before that were spread out over 48 games.

There’s a five-point gap between the teams in the top six and the chasing pack. And looking at the teams City are keeping company with – Wigan, Shrewsbury, Scunthorpe, Blackburn and Charlton – you wouldn’t anticipate anyone dropping out of contention. It probably sums up the Bantams that they have now beaten Wigan and Shrewsbury away, yet lost at home to Scunthorpe, Blackburn and Charlton.

Still, City are keeping pace with them and have the capacity to improve further. The January window could be the key to adding the attacking thrust lacking in the squad. And if McCall can get his players to play better when trailing matches, an automatic promotion push might just be on.

Like Loading...
‹ Gary Jones: “You’ve got to be a certain type of player to play for Bradford, to handle it”
Tyrell Robinson clinches last-gasp winner as Bradford City sign-off seven-goal thriller in style ›