Home › Opinion › Remember the survivors and not just the 56

Remember the survivors and not just the 56 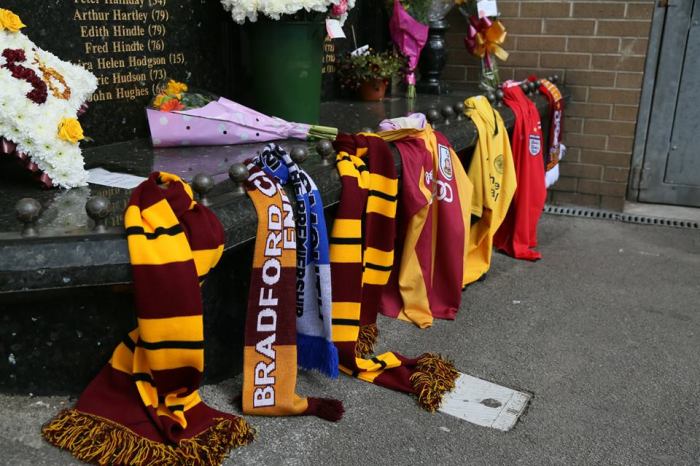 The anniversary of the Valley Parade disaster of 11 May, 1985 has come to be defined by the number of fatalities, 56. There is no shortage of ‘commemorative’ items bearing the figure and for younger generations the disaster is all about the 54 supporters of Bradford City and the two from Lincoln who perished on that day. The t-shirts, sweatshirts, badges and computer images are all about the 56.

Yet the victims of the disaster were far in excess of 56 because the survivors from that day also suffered in different ways. There were those who incurred injuries from burns and those who had the trauma of having witnessed the events unfolding. Similarly, there was the guilt of many of those who otherwise escaped unscathed. So too the families of those caught up in the disaster were impacted.

The commemoration of the anniversary has been embraced by younger fans almost as a badge of honour for the club on a par with equivalent disasters in Munich or at Hillsborough. However, to overlook the experience of the survivors is to discourage a broader understanding of the Bradford disaster, its aftermath and how it helped shape the future of the club and the foundations of its modern revival in the past thirty years.

Immediately after the fire the priority was to look after the survivors and to achieve a return to normalcy. The summer of 1985 was about the victims who had survived, not the dead for whom nothing could be done aside from burying them.

The efforts of supporters, players and the people of Bradford – as well as those from across the UK – focused upon hospital visits and fund-raising for the survivors. A new supporters club was formed to help rebuild the club and The City Gent played its part in encouraging constructive support for the club. Surprisingly perhaps it was a time of positivity and energy, of determination to overcome and recover.

The bond that existed between players and supporters was quite unique and memorable for the shared conviction and common cause. The players for example made endless hospital visits in the aftermath as well as attending various funerals. So too the goodwill of other supporters from other clubs shall never be forgotten.

We all remember 11 May, 1985 in our own ways and it is impossible to convey to those were not there just what the experience was like. It is almost impossible to describe the heat of the fire and younger fans struggle to comprehend exactly how decrepit was the old stadium. My own thoughts revolve around the good fortune of not having been injured. The disaster was my earliest realisation that mortality can come unexpectedly and much sooner than you might think.

Of course we need to remember the fact that there were 56 needless and premature deaths. However, to overlook that there were survivors from that day is mistaken and it prevents an appreciation of how light emerged from the darkness of despair. In my opinion the memory of 11 May, 1985 is equally a celebration of the recovery of the football club as a local institution and of the social cohesion as people came together. It is not just about the mourning of the 56.

Maybe it is a generational issue, but I would feel far more comfortable if the disaster was remembered for more than just the 56 fatalities and I know that I am not alone to question the appropriateness of the various items sold that refer to the number. The commemoration of the disaster was always a dignified affair and it is notable that until around ten years ago there was no such thing as garments adorned with ‘56’ – something which has become for many a de facto club totem.

The shifting emphasis just doesn’t feel right even though it has to be a big part of the disaster narrative. Ultimately it is the younger generation who will inherit and determine the form of future commemorations and I would hope that it remains dignified and respectful of earlier practice. In that regard I am afraid that I find the clapping on the 56th minute inappropriate and the seeming obligation to have to partake.

Thirty years ago the general consensus was that the memory of the dead was best preserved through the rebuilding of Valley Parade and for Bradford City AFC to sustain itself at a higher level. Support for the Burns Unit became another cause. All of which was equally what the survivors wanted and it is that unity of spirit which also deserves to be recognised.

The memory of how the disaster brought people together in common purpose is one that has relevance in today’s world and is something of which City supporters should be proud and not overlooked.