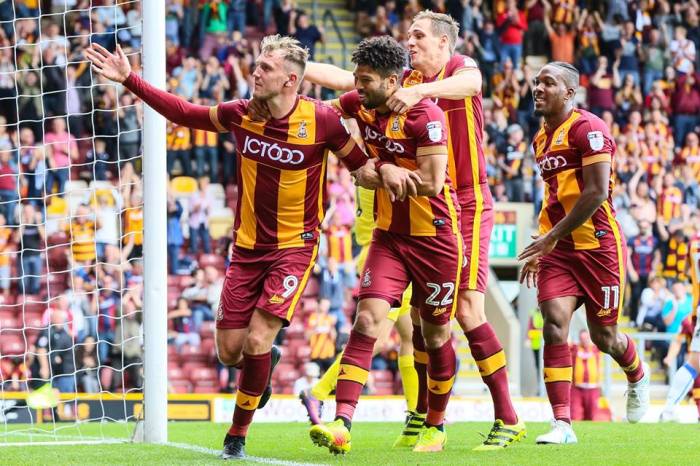 The modern history of Bradford City is a recurring lesson in just how essential it is to have a proven goalscorer. A striker who can routinely find the back of the net. Someone who can get you between 15-25 goals each year.

Sean McCarthy’s 79 goals in 160 games offered hope in the gloomy early 90s. Lee Mills’ 25 goals in the 1998/99 season were huge in getting Bradford City promoted. Dean Windass’ 60 goals between August 2004 and January 2007 kept the Bantams competitive in League One. Peter Thorne’s 32 goals from 84 games was massive in League Two between 2007-2009. Nahki Wells’ 52 goals in 112 appearances took the Bantams from the depths of League Two to half way up the Football League ladder.

Take those goals out of Bradford City, and it’s usually not a pretty picture.

When Windass was loaned out for a fee midway through the 2006/07 season, City collapsed and were relegated from League One. And after Wells’ contentious exit to Huddersfield in January 2014, City struggled for goals, arguably costing them a play off finish in 2014/15. Wells’ star had shone so brightly that City had to cash in when they did, but without him they struggled to find a reliable goalscorer. At least not until the January 2017 signing of Charlie Wyke.

And now, nearly five years’ after Wells left Valley Parade, a strikingly similar debate is raging over the future of Wyke. The 25-year-old was signed for around £250,000 from Carlisle, and has since netted 23 goals from 62 games. Around one in every three. His performances in claret and amber have placed him onto the radar of other clubs, with the likes of Sunderland, Preston, Bolton, Peterborough and Wigan all linked with the front man. Formal bids have been submitted, with a weekend offer from Sunderland moving somewhere near to City’s valuation.

There seems to be a heavy sense of inevitability that Wyke will be departing Valley Parade in the next few days. City’s hand somewhat weakened by the fact Wyke is entering the final 12 months of his contract, and so can leave for free in the summer. His value will only plummet from here. The bidding war that is currently hotting up is City’s last chance to make a healthy profit on the initial outlay.

And whilst developing and then selling players for large fees is a fundamental part of Edin Rahic and Stefan Rupp’s philosophy, you worry about whether it is the right option for Bradford City’s prospects going into the 2018/19 season. Whilst Wyke had a difficult six months – in keeping with virtually every other member of last season’s squad – he is said to enjoy life at Valley Parade, and values the positive relationship he has with Bradford City supporters. With age on his side, there isn’t necessarily any urgency on the player’s part to move onto bigger and better. Especially given he is so fundamental to his current club.

The landscape has also shifted around him. City’s summer transfer recruitment business looks increasingly impressive, and the activity should really benefit Wyke. Whereas for large parts of his time at Valley Parade, Wyke hasn’t been blessed with great service, City have brought in the likes of Sean Scannell, Jack Payne, Josh Wright, Serwin Seedorf and Hope Akpan to add to Tyrell Robinson, Jordan Gibson and Shay McCartan. Suddenly, there is a lot more creativity and attacking intent about Bradford City’s midfield. Its main striker should absolutely thrive.

If Wyke was to remain at Valley Parade this season, the team around him looks more suited to his strengths, and he could score a hatful. No other striker on the books comes close to Wyke’s all-round ability, making him a certain starter. If Wyke has eyes on moving on from Valley Parade at some point, he has a terrific chance to put himself in the shop window by leading the line for another 12 months. By next summer, he’d be free to find another club, and a strong season in front of goal would ensure a long list of suitors.

And for Bradford City, the risk of losing Wyke’s services now is it could undermine so much of the promising transfer activity. The windfall of a large transfer fee would enable them to shop around for a replacement in a position of strength, but there are no guarantees of bringing in someone better.

The opposite is so often true. A few months after Sean McCarthy was sold to Oldham Athletic in December 1993, a club record fee of £300,000 was wasted on John Taylor, who didn’t last a season. As for life after Nahki Wells, every City fan lets out an involuntary shudder at the mere mention of Aaron Mclean. When Stuart McCall, John Hendrie and Ian Ormondroyd were sold in 1988 – City having just come agonisingly close to reaching the top flight – the near £2 million windfall was wasted, and within two years the Bantams had been relegated to the third tier.

It is rare that a club which sells a prize asset manages to successfully compensate for the gap they leave behind. For every Coutinho leaving Liverpool, there are more commonly cases of Saurez, Alonso and Torres leaving Liverpool. That will be the challenge facing the Bradford City transfer committee right now, given the growing likelihood of a Charlie Wyke-shaped hole needing filling. Billy Sharp has been linked, but is reportedly on huge wages and has already held talks with Sunderland, with the suggestion the Mackems are aiming to sign both Sharp and Wyke to spearhead their attack.

And that’s why, the option of saying no to all suitors surely has to be on the table. Currently, Bradford City receive £1.4 million a year from the Football League as part of its central distribution of funds. Get to the Championship, and they would earn around £7 million a year. If Bradford City could get promotion this season, with Charlie Wyke leading the line, the financial rewards would far outweigh any transfer fee they’d be able to secure to sell him now.

Of course, there are no guarantees of promotion, and with Bradford City apparently on track to have made a £700-800k loss over the 2017/18 season – before it was clear there was going to be a notable drop off in season ticket sales – there could be a pressing need to balance the books. But if Charlie Wyke is lining up in a Sunderland shirt, rather than City, for the big kick off in two weeks, the chances of a successful season at Valley Parade are likely to recede.

Charlie Wyke underachieved last season, hampered by a lack of service. And yet he still scored 16 goals. Get him fit and firing, leading the line of this new-look Bradford City, and Michael Collins might just have a side capable of pushing for promotion.