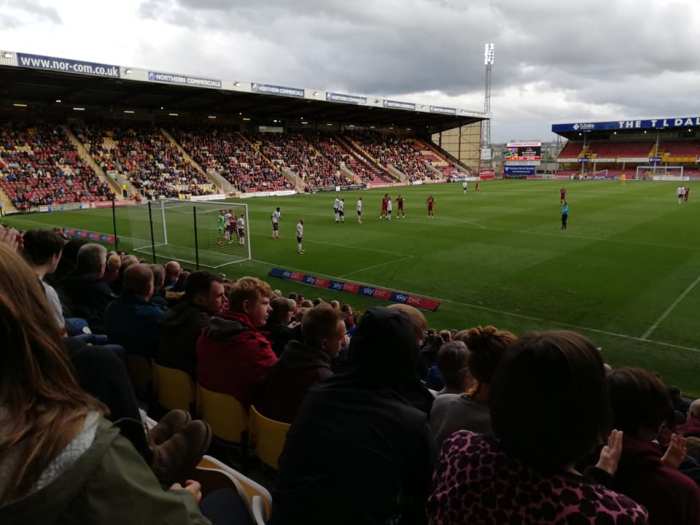 It’s turning. Slowly. Perhaps too slowly to save Bradford City from further self-implosion. But in defeat against Charlton, there were signs the players are capable of arresting their early season slide. And that some faint green shoots of recovery have roots beneath the surface.

It was not enough, yet, to bring an end to a run of consecutive losses that now totals four, pushing Bradford City into a relegation spot for the first time since promotion to League One five years ago. But it was a game they were desperately unlucky to lose. It was better than Blackpool, which in itself was better than the last knockings of the dismal reign of Michael Collins.

Turning. Slowly. Improving. It gives us supporters hope. Something to cling onto. Even if that’s all we have.

David Hopkin’s external perspective on the mess of before is vital. The recent failures are not his, and crucially he operates independently of the high emotions swirling around Valley Parade. He has a plan for a club that was previously operating towards a muddled strategy at best. He has a calm and measured level of confidence that he is projecting well. In the midst of turmoil, it is exactly what Bradford City needs.

Straightaway there is a greater level of organisation to the Bantams, underwritten by enhanced commitment and courage from a group of players who, at times this season, have looked overwhelmed by the challenge of playing for this club. The team was determined, and ran themselves into the ground trying to recover from conceding in only the third minute. And their public responded with magnificent noise and support that so nearly saw the ball sucked over the line.

Charlton’s second, with 10 minutes to go, came against the run of play. And though some fans headed for the exits before the end, and some booed at full time, most fans applauded the players off the field. An acknowledgement of their efforts. In the commitment stakes, this is the level they must reach every week.

Of course, success will ultimately come from showing more quality. Making better decisions, and conceding fewer mistakes. Both Charlton goals were very poor from the home side’s perspective. Firstly, from Charlton’s opening attack, Jack Payne lost possession and a direct ball wasn’t dealt with by McGowan, meaning Karlan Ahearne-Grant had time and space to finish emphatically. The second saw the highly-rated Lyle Taylor finish well from an angle, his powerful shot nestling in the top corner. Sean Scannell, looking worn out, had struggled to get back and protect the space Taylor found.

Hopkin clearly favours the 5-3-2/3-5-2 set up, but his three centre backs are the obvious weak point at the moment. At times, McGowan resembles Guy Branston in the way he creeps out of position and dives into challenges, but in doing so risks leaving a gap if he fails to win possession. It looks great when he gets it right. But it can prove very costly when it goes wrong. Many of the best City centre half partnerships over the years have seen one defender aggressively challenge for possession and the other mop up any errors. If McGowan is to be City‘s new Andrew Davies, someone else needs to step up to the Rory McArdle role better.

Right now, the back three look to have too many errors in them. Although the system deployed does leave them very exposed. Charlton’s best spell of the game came in the 20 minutes before half time, when their diamond midfield overran City’s central two. At wing backs, Scannell and Connor Wood arguably produced their best performances so far for the club. But they need great energy levels to keep getting back, in order for the system to work.

The other fundamental issue is that Hopkin’s direct approach – get the ball quickly up the pitch, and press to force errors – lacks a targetman. Eoin Doyle – captain in place of the injured Josh Wright – battled hard, but asking him to win long balls or get on the end of high crosses is proving ineffective. City’s second half improvement stemmed from playing the ball more through midfield and then in to David Ball and Jack Payne. Backed by the two wing backs, they began to overload the space and City looked a greater threat.

City still aren’t creating clear cut chances – tellingly they had only one shot on target all afternoon, when Doyle’s second-minute shot was saved, and it is damning that no City player has scored in front of the Kop this season.  Nevertheless, the threat of an equaliser grew stronger and stronger – McGowan was denied what looked a plausible penalty. A City goal would have lifted the roof off the place, and may have proven to be the badly needed turning point in the season.

The late Charlton settler rendered the final stages academic, but further highlighted one of the key threats against Hopkin succeeding. A substitutes bench of seven, where not one player has more than 30 senior appearances in English football, seriously undermined Hopkin’s hopes of effecting the outcome from substitutions. Kai Brunker was typically ineffective – the answer to the targetman problem he is not.

The huge mistake of appointing Michael Collins may have been undone, but the damage of a poor summer planning is there for all to see. Hopkin lacks the players he needs to make his system work. Whatever stopped him from taking up the job in the summer, it meant he has not overseen recruitment that would surely have been very different. So for now, he must work with a group of players built for another strategy. Twice he has commented on the folly of bulking up your squad with youngsters. It is clear that he will seek to move towards favouring experience when he is able to.

When Alex Ferguson famously sold Paul Ince, Mark Hughes and Andrei Kanchelskis in the summer of 1995, it wasn’t simply because he thought Manchester United’s young players deserved more of a chance. It was because he knew that in David Beckham, Paul Scholes, Nicky Butt and Gary and Phil Neville, he had a group of kids who were genuinely ready. City’s efforts to focus more on young players should be applauded, but you can’t partly build a first team squad on the assumption unproven youngsters will be ready to play their part. It needs to happen more separately from first team matters, and only if and when a young player makes the grade should they come into the head coach’s thinking.

Defeat leaves City in the bottom four, eight months and three head coaches after sacking Stuart McCall when fifth in the league. It was a highly questionable decision at the time, but now looks like utter, utter madness. With one-sixth of the season done, the question is whether the club’s objective must now be downgraded to avoiding relegation. There’s a long way to go, but the squad isn’t going to miraculously turn into world beaters. Promotion looks highly improbable. Saturday’s opponents, Doncaster Rovers, sit inside the play offs, already nine points ahead.

A grim relegation battle looks unappetising, but falling back into League Two would be an unthinkable setback. The club must stabilise. Stop the damage over the rest of the season, if nothing else.

Strong leadership is vital. David Hopkin’s steely determination certainly offers that, and on the field against Charlton, a new figurehead emerged. Jim O’Brien, signed by Hopkin this week, was a true revelation. A tough tackler, all-action midfielder, he drove the team forward in the second half especially. A hard, crunching but clean sliding tackle – just after half time – had the crowd on their feet roaring in approval of O’Brien. And over in the press box, the watching Gary Jones would have doffed his radio headphones in appreciation. O’Brien’s bite is exactly what Bradford City need. A loyal lieutenant who can imprint Hopkin’s philosophy. He set the standards here. Others followed him. And that could be huge.

Defeat never feels good. This was no different. But whilst the dark clouds still loom large, it’s turning. Slowly. And given the rashness and panic that has badly damaged Bradford City over 2018, it is vital that we show patience to allow David Hopkin to turn this around.

Like Loading...
‹ Edin Rahic’s apology should be precursor for further change if Bradford City are to move back from the brink
This is who we are ›