The League One relegation swamp 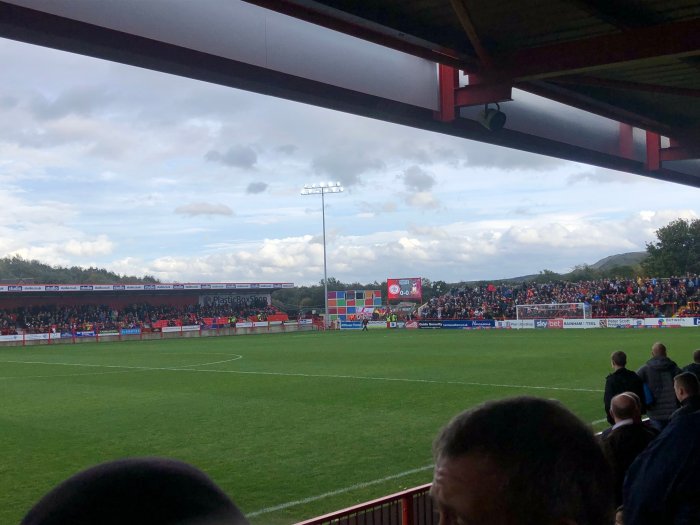 Look up. Look up some more. Look up even further. Whilst Bradford City remain deep in relegation mire, they’ve got plenty of company when it comes to fretting about staying in League One.

The excellent Not The Top 20 podcast has stated the League One relegation battle is arguably the story of the Football League this season. Everyone in the bottom half of the table is looking over their shoulders. There are just seven points that separate 13th-placed Burton Albion from the relegation zone. Even Fleetwood, Coventry and Southend (10th, 11th and 12th place respectively) have cause to feel it’s not job done just yet.

The gap between 15th-placed Accrington (35 points) and 21st-placed Oxford (30 points) feels especially tight. It’s a heavily congested bottom 10 – and it means Bradford City still have a big opportunity to escape.

Whilst it is not untypical for the bottom half of League One to feel close at this stage of the season, the margins between clubs are smaller this time. This is because the teams just outside the relegation zone have fewer points at this stage than is usually the case. Whilst this season lacks a dominant team at the top (Portsmouth, who have led the way most of the campaign, are no Sheffield United, Wigan, Bristol City or Wolves), the relegation threat hanging over so many clubs is partly because there are five teams significantly superior to the rest.

Along with Portsmouth – Luton, Sunderland, Barnsley and Charlton are a cut above (only Charlton have lost more than five times, showing the top five don’t give much away). Peterborough, Doncaster and – at a stretch – Blackpool are vying for the final play off spot. Everyone else is a much of muchness. Not good enough to push for a place in the Championship, but equally not good enough to assume they won’t be playing in League Two next season. It has led to a cannibalistic bottom two-thirds to the division, where everyone takes points off each other and few clubs can find any consistency.

This competitive but distinctly average League One suggests that the points mark needed to guarantee survival will be lower than can sometimes be the case. Whilst it is foolish to make predictions, a forecast of the final League One table – based on each team’s current average points per game total, so far – would look like this.

The points total for finishing in each position, rather than the team occupying them, are what matters here. Inevitably over the next few months, some clubs near the relegation zone will go on strong runs that lift their points per game total and takes them up the league, whilst others might collapse in both form and league position. But as a barometer of the overall division trends, it would appear that reaching 48 points will keep you in League One for next season.

For all the doom and gloom around Valley Parade, getting to 48 points remains a plausible outcome. Our current average of 0.97 points per game is pretty dismal, but that includes the wretched autumn period when the club was at such a low ebb. Even with recent results, our average points per game total since the Portsmouth defeat, at the start of November, is an improved 1.5 (the ninth-best in League One over this period). Should City maintain that 1.5 form between now and May (which is not unrealistic), they’d finish on 53-54 points. And based on the above overall League One forecast, that would mean the Bantams finish 17th.

There are 17 matches left to play, starting with the visit of Shrewsbury Town on Tuesday night. Summing up the tightness of the bottom 10, City can draw level on points with the 18th-placed Shrews if they win.

To get to 48 points, City need to win seven of these 17 games, or at least win six and start picking up draws more often than they have (Saturday’s tie with Burton was only the fourth time City have drawn this season). Getting to 48-50 points is a big ask, but it is not beyond the Bantams. If they can get back to towards the swashbuckling form of December, there are a host of clubs just above them who look catchable.

Despite their impressive FA Cup exploits, bottom club Wimbledon, with only two league wins since the end of November, are starting to look doomed to relegation. The sacking of Neil Ardley and appointment of Wally Downes did give them a festive period bounce, but that has evaporated. It’s similar for Bristol Rovers, who under the recently appointed Graham Coughlan are reverting back to losing ways, after a mini Christmas revival that followed the dismissal of Darrell Clarke. Rovers’ home record is the second-worst in the division.

Rochdale are on a terrible run – winless in six, no clean sheet in 11. They’re bottom of the League One form table over the past six games, and only Accrington have a worse record over the last 10 matches. Dale currently sit just one place and one point above the drop zone, and all four teams below them have games in hand. At Spotland they must be terrified, and it will be interesting to see if the growing pressure triggers the nuclear option of sacking Keith Hill. As the most successful manager in Dale’s history, it would be some call.

Shrewsbury are sliding down the table – encouragingly ahead of Tuesday’s meeting with the Bantams, they have the worst away record in the league. Gillingham’s erratic form might just keep them up, although if speculation about top scorer Tom Eaves leaving comes to fruition before the window closes on Thursday, they could nosedive.

Elsewhere, Oxford’s poor away record (21 of their 30 points have come at home, and they’ve not won on the road all season) keeps them in big trouble. Walsall and Accrington’s form is amongst the worst division, over the last 10 rounds of fixtures, suggesting they could drop into it. Plymouth, Wycombe and Burton have a cushion on the bottom four, but don’t travel well. If their home form takes a dip, they could still fall back into danger.

Can City win seven of their 17 final games? Well, on paper, their remaining fixtures are not bad. The next three home games are against teams with relegation concerns – Shrewsbury, Fleetwood and Plymouth. Realistically, City need to win at least two of these games. The two home matches that follow look trickier, as Peterborough and Luton come to town (Posh, for all their home struggles, have the second-best away record in League One, Luton the fifth). But the final Valley Parade fixtures against Blackpool, Doncaster, Gillingham and Wimbledon offer little to fear.

If the Bantams can’t win at least five of these final nine home games, frankly they don’t deserve to stay up. There are points to pick up on their own patch, and they must claim them.

Away from home, it is a mixed bag. There are also some big six-pointers against teams near the bottom, but some tough trips, as they’ve yet to visit three of League One’s strongest home sides. Winning Saturday’s game at Wycombe (who have the sixth-best home record in the division) would be a major boost, but a point is realistically a good return. After that, a trip to Walsall offers grounds for optimism – the Saddlers have only kept one clean sheet at home all season.

In March, away trips to Portsmouth and Charlton probably need to be written off as damage limitation, but an afternoon at Oxford in-between could be a big moment. The final three away fixtures are at Bristol Rovers, Coventry and Scunthorpe.

Should City go into the Bristol Rovers game on Saturday 13 April with survival hopes looking reasonable, they could be in a very strong position, with five games to go. After the Bristol Rovers game, City go to Coventry City, welcome Gillingham to Valley Parade, visit Scunthorpe United before ending the season at home to Wimbledon. That is a kind run-in.

Whilst the final few days of the transfer window will have a huge influence on City’s survival chances, there are plenty of reasons to believe the Bantams can win this relegation fight. The competition in League One is not as strong as it has been. And the fixture list offers plenty of opportunities to chalk up the required 48-50 points that should be enough to avoid relegation.

City are far from doomed. It’s going to be a nervy, bumpy ride, with inevitable twists and turns. But if they can build on Saturday’s draw with Burton and rediscover the high press approach that worked so well over December, the Bantams can just about claw their way out of the League One relegation swamp.

Like Loading...
‹ Worrying times
Bradford City find the perfect moment to show they have resilience after all ›