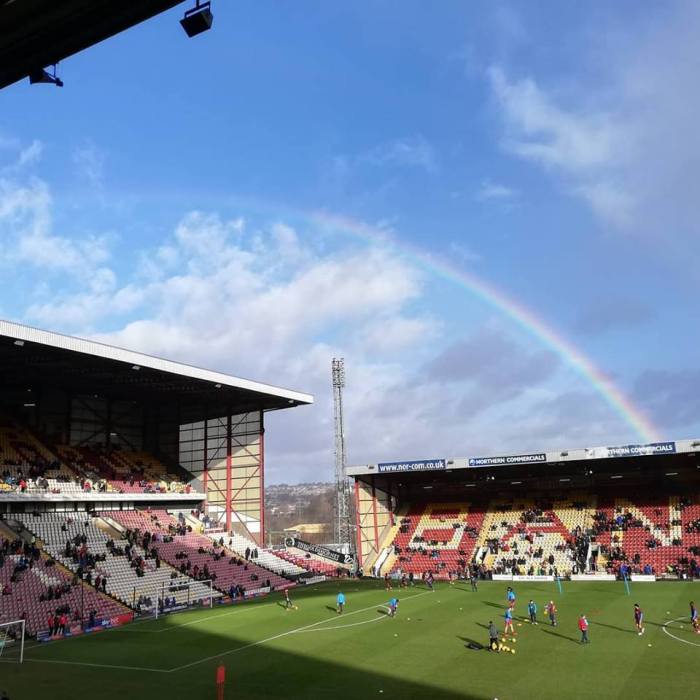 The secret’s out. Daniel Stendel knows it. Chris Powell and Gareth Ainsworth too. And now we can add Joey Barton to the list of League One managers who have figured out how to neuter the Bantams.

Stop Jack Payne, stop Bradford City. After David Hopkin’s men ran riot over the festive period, scoring goals for fun and edging out of the relegation zone, opponents have got wise to their threat. Flood the central midfield. Place a couple of anchors in front of the back four. Squeeze the space on the pitch where Payne has been devastatingly effective. And the attacking threat of Bradford City becomes one-dimensional and easy to defend.

Hopkin had found a winning formula from building a team around his two numbers 10s – Payne and David Ball – giving them the platform to roam around the final third, in-between the lines of opposition midfield and defence. The reward had not just been a surge in results, but some terrific football. In a season where the bar has lowered, the quality of the performances in beating Walsall, Scunthorpe, Rochdale and Accrington had been commendable. City were playing their way out of trouble. Some supporters even claimed it was the best football the Bantams had played in years.

But that’s all come an abrupt halt, and it leaves Hopkin with mounting headaches, going into the final third of the season. Against Barnsley, Southend, Wycombe and now Fleetwood, the opposition have taken measures to stop Payne by outnumbering and denying him time and space. The January window arrival of another number 10, Billy Clarke, shows Hopkin continues to place a lot of weight on his 4-2-3-1/3-4-1-2 approach keeping Bradford City in League One. Now, he’s going to have to rethink it. Without an abundance of alternative options.

Fleetwood’s counterbalance to Bradford City’s gameplan was the most stark demonstration yet of the need to go back to the drawing board. In a truly awful football match, the Cod Army took an early lead when woeful City defending allowed Paddy Madden to smash a James Wallace cross into the roof of the net. It allowed the visitors to stink the place out. Adopting time-wasting techniques early doors to continually disrupt City’s momentum. They parked the bus in front of Alex Cairns’ goal, dutifully dabbling in the dark arts in order to see out their advantage.

It is disappointing to see Joey Barton – who likes to portray himself as a deep thinker of the game – resort to such cynical tactics. He will argue – with justification – that Fleetwood don’t have the same scale of resources of other clubs in League One, including Bradford City, so he must make the most of what he has. They were a horrible, horrible team to watch, but their approach earned the three points. And, ultimately, that’s all that matters.

Fleetwood laid the traps, and City fell into them. There was a debate before the game that David Hopkin is a long ball manager, and watching the Bantams resort to direct balls towards George Miller, which were continually dealt with by the outstanding Harry Souttar and Ashley Eastham, will do little to dispel this belief. But this was not the intention of Hopkin.

Before co-commentating on the Pulse today, we had a pre-match, 10-minute conversation with Hopkin, where he outlined his tactics and thinking behind his team selection. With Connor Wood struggling with knock, Jacob Butterfield had been brought in central midfield with Lewis O’Brien pushed into one of the three attack positions, behind George Miller.

Hopkin explained Butterfield was looking excellent in training, and he wanted him to play deep alongside Hope Akpan, spraying the ball around the park and setting up attacks. He was wary of the physical dominance of Fleetwood’s two central defenders, so opted for Miller over Doyle because the on-loan Barnsley forward is adept at running the channels, dragging defenders out of position and creating space, which he hoped Payne and Ball could exploit. He wanted the ball played to feet, not in the air, which was where he hoped Butterfield and Miller would make the difference.

It didn’t work out that way. Butterfield showed signs of his quality, but lacked match sharpness and speed of thought on the ball. He will get better over the next few weeks, but was largely ineffective on his full debut. Miller started okay, but his confidence appeared to wane all too quickly. He stopped making those runs, and City couldn’t get the ball into areas where they could then find him.

Sadly that meant the team defaulted to going direct. There was a lack of courage on the ball. Anthony O’Connor and Nathaniel Knight-Percival – who had his worst game in weeks – kept hoofing it long. Richard O’Donnell showed no appetite to roll the ball out to his back four, so the team could pass it around. The City keeper’s kicking was off colour. The endless high balls into the middle of the park were meat and drink for Fleetwood’s backline. It was incredibly frustrating for everyone to watch, and that will include Hopkin.

Ultimately it is not the first time that a football team has failed to stick to a manager’s gameplan, and I can’t think of a single former City boss who hasn’t endured an afternoon as directionless as this, when his players did the opposite of what they ask. As the cliche goes, when the players cross the white line there’s not a lot the manager can do.

When the players did get the ball in the final third, there was a lack of tempo that made City easy to defend against. Several passes, usually with the ball ending up in a wide position, before a predictable high cross that was cleared with ease. There was no innovation. No speed of thought. Payne beat a couple of men on a few occasions, but his final ball lacked quality. O’Brien’s effort and work rate can’t be faulted, but he needed to use the ball better. If the last home game against Shrewsbury was Ball’s best game for the club, this was easily his worst.

Usually City’s three best performers, Payne, Ball and O’Brien just didn’t have the space to link up and create chances. But Fleetwood didn’t let them. Barton has been playing a 4-3-3 formation in recent weeks, but off the ball here Ashley Hunter and Madden dropped into midfield to make it 4-5-1. It stifled City, bringing the attack to a halt. And though the home side created a few chances to equalise, there was never a period of sustained period. Only the slenderness of the scoreline allowed us to retain any hope.

From the bench there were options, but not in a way that could change the game. Eoin Doyle did okay when he came on, but was easily crowded off the ball. Taking off Payne once again raised eyebrows, and the like for likeness of his replacement Billy Clarke meant there was no tangible gain from the switch. Luca Colville came on for Miller in the closing stages, but there was no space for him to make an impact. The irony of the accusation that Hopkin is too long ball is that he probably could and should have pushed one of his centre backs up into the attack during the closing stages.

Hopkin has received a huge amount of criticism post match. After such a wretched City display, that’s understandable. He has broad enough shoulders to deal with the arrows. His overall record as manager doesn’t read great on paper, but to solely look at that is to ignore the mess he inherited, the toxic mood around Valley Parade during Edin Rahic’s final weeks, and the fact the finances were so badly managed last summer, which limited what Hopkin could do on the transfer front during January.

I’m happy to stick my neck out and support Hopkin. I think the situation has similarities to Phil Parkinson’s first season in charge of the Bantams in 2011/12, where he kept City in League Two – but with inherited issues to sort out he was far from impressive. Yet there was an air that Parkinson was addressing the culture of the club and making long-term meaningful changes – and ultimately those bore fruit in spectacular fashion.

This week’s news Hopkin has arranged for photos of Valley Parade to be installed on the training ground corridors might seem incidental, but they are part of an objective of restoring that winning culture over the long-term. Shortly after joining, Hopkin had been amazed to find some of Phil Parkinson’s old things within the manager’s office at the training ground. He feels certain details around the club had been taken for granted or neglected.

Hopkin talked to us before the game about the Valley Parade fire and his intention of getting the squad to learn all about the disaster and the impact it has had on Bradford City supporters. These and other initiatives are not the actions of a manager merely happy to take his turn passing through the revolving door of Bradford City, whilst not really caring about the club.

If he can keep the Bantams in League One next season, I believe Hopkin can deliver long-term success at the club. We’ve given in to far too much short-termism at Valley Parade over the past 12 months, and at some stage we have to stick with a manager during the bumps in order to let them build something. Hopkin’s level-headed assurance, coupled with his considerable success at Livingston, offer reasons to stick by him.

That said, these new few weeks are clearly a time where Hopkin will need to demonstrate his worth to his public. Fleetwood’s unsubtle approach tore apart his gameplan. Next week, it’s Plymouth Argyle and Derek Adams – a man who has enjoyed considerable success from the school of tactics that Barton is diligently following. We can expect a similar type of opposition approach next week, so what’s Hopkin going to do differently?

Because against Fleetwood, we probably saw damning confirmation that things can’t go on as they are. What had made City successful has been worked out and thwarted by other teams. A new way is needed. A different plan of action must be developed on the training ground, and it must be developed quickly.

If, in a week’s time, we’re talking about a Plymouth Argyle victory at Valley Parade, with Hopkin having played a similar formation to before, those questions about Hopkin will get louder, and they will be more difficult to defend. This is a pivotal week in Bradford City’s season. And it is also a big, big week for the Bradford City manager.

Like Loading...
‹ Bradford City’s commitment to affordable season tickets is something to be proud of, and now there’s a way to contribute more
A ray of hope as Bradford City remain deep in relegation trouble ›