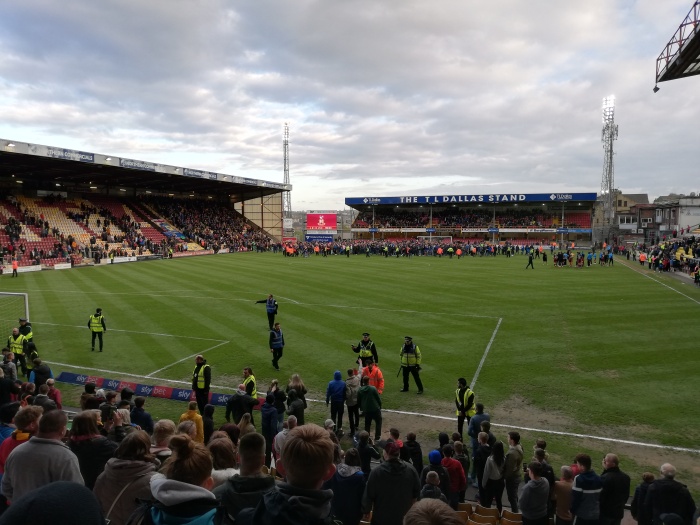 I love Bradford City. And I’m fed up of hating them.

I’m fed up of this wretched season, but which at least has now ended with a 0-0 draw against Wimbledon that keeps the Dons in League One by the skin of their teeth.

I’m fed up of feeling angry about City’s woeful effort to avoid relegation. I’m fed up of watching players who can’t or won’t run through brick walls for the club. Who simply don’t care as much as we do. Who go through the motions at best.

I’m fed up of the lack of fight. The fact we have only gained one measly point from a losing position all season. Folding every time the going got tough.

I’m fed up of laboured attacking play. Of a weak midfield. Of a ponderous defence. I’m fed up of conceding soft goals. And of only sporadically finding the net.

I’m fed up of losing. So, so many games. Soft defeats, heavy defeats, unlucky defeats, gutless defeats. I’m fed up of the sharp decline in our standards. Of watching all the good work of 2012-2017 thrown away. I’m fed up.

At least this was it for the season. The last knockings of a turgid campaign are done. There was an element of here’s-what-you-could-have-won watching Wimbledon players and fans celebrate survival on our turf. At one stage in January, they trailed the Bantams in the table by eight points. They never threw in the towel. And in avoiding the drop they served to embarrass the City players even further.

Wimbledon only needed a point to stay up, although it was mightily close for them. There was huge, huge drama in other key relegation tussles involving Plymouth, Scunthorpe and Southend, meaning the Dons stay up by virtue of a goal difference that is only three goals better than Argyle.

The Dons manager, Wally Downes, nearly paid the price for adopting a conservative approach. He set Wimbledon up not to lose this contest, which meant City had 63% of possession and clear territorial advantage. And though the Dons hit the post and arguably created the better chances, a better team than the Bantams would have won this game and sent Wimbledon down.

There were positives from City in the game. Danny Devine made his first home league start since New Years Eve 2016, and acquitted himself fairly well. Useful on the ball and with a good awareness of players around him, he was positive in intent. Alongside him Jermaine Anderson was decent. He is coming into his own right at the end of the campaign. A limited player for sure, but not hopeless. It will be interesting to see if Gary Bowyer rewards him with a new contract offer.

Out wide Sean Scannell was excellent again. At full time he gave his boots to a young supporter in the Kop before embarking on a solo walk of applause that looked every inch as though he was saying goodbye. He linked up well with Kelvin Mellor, and on the opposite side Calum Woods was in fine form. Woods’ short time at Valley Parade has been injury hit. Interestingly, City have not lost one game where he has featured. Lewis O’Brien rightly got a good reception on his final game of his loan and did well.

Elsewhere it was patchy as usual, and that was why City’s huff and puff did little to hurt Wimbledon. There was simply no quality in the final third. Crosses were easily defended. Opportunities to take a shot at goal were not taken. Eoin Doyle rounded off a season of under-achievement with a lifeless display. It was no surprise he was substituted. What was remarkable was the amount of home fans who clapped him off.

If the game lacked incident, the scenes at the final whistle certainly offered up plenty of talking points. Wimbledon, who brought an impressively large away support, celebrated wildly. Their fans charged onto the pitch to embrace their players. It was a heart-warming sight and you’d have to be a joyless football fan to begrudge them their gleeful blowout. 19 years ago, I and thousands of others were celebrating Premier League survival on the pitch after beating Liverpool, which ironically had sent Wimbledon down.

So fair play to the vast majority of Wimbledon fans today. And massive congratulations on staying up. However, it was tainted by at least one idiot setting off a flare (pyro) in the middle of the pitch. Of all the football stadiums in the world to do this in. Of all the moments to do it. Prior to kick off, Wimbledon fans had impeccably joined in the minute’s silence to remember the Valley Parade fire disaster. But this thoughtless moron badly let down their club.

56 people lost their lives at Valley Parade because of a fire. Hundreds of others were injured. Thousands were mentally scarred by what they saw. It doesn’t go away. Talk to people who witnessed the fire and how it has affected their lives. And on the day we pause to remember those awful events, Bradford City supporters are forced to endure the smell of smoke in their own stadium.

It is unacceptable. Wimbledon and their fans would do well to name and shame the individual behind it. Because it is damaging the reputation of a fine football club. Well done to the rest though. You are a credit to your club and to football. And it was nice to see a group of fans actually enjoying themselves at Valley Parade this season.

Whilst all this was going on, Gary Bowyer came over to applaud the Kop and a handful of young and foolish City fans decided to invade the pitch too. The stewards and police were quick to react, getting them off the pitch. Absolutely the right thing to do. However, it all began to get sinister as the police began waving batons and threatening to use them on supporters who didn’t get off the pitch. The obvious anger of the police seemed out of proportion. They’re supposed to be the calm authority. The scenes quickly turned ugly.

And then, when the City half of the pitch was cleared, the players went on a lap of appreciation for those who had stayed back. And when they got to the Kop, they were greeted by boos. It was quite stunning. I joined in with the booing myself. I won’t lie, it felt gratifying. You could see the embarrassment of the players having to endure it. This is what they deserved, and the Kop gave it both barrels. A quite fitting end to the season.

And with that, we wave goodbye to League One. Close another chapter in the club’s turbulent history.

Draw a line. So we can move on.

Leaving the ground I felt relief. Not just because the ordeal of this season is now over. But because now we can truly begin to look forwards again. Allow optimism to cautiously re-enter the room.

I love Bradford City. And part of the deal is enduring set backs and failures. As a City fan, you have to be resilient. We don’t sign up purely for the glory. This is not the first occasion the club has been relegated. It won’t be the last. It is a moment in time. A bad moment, yes. But a moment nonetheless.

Perspective was on show with the minute’s silence. And, next Saturday, many of us will pack out Centenary Square to remember those who lost their lives supporting the club we all deeply love.

Saturday 11 May 1985 – that was this club’s darkest hour. Nothing we have seen this season comes close. Relegation is a major set back. But it is not a disaster. This club has come back from unimaginable horror. Losing a few football matches is nothing in comparison. We can recover from our current problems.

The end of this season allows us to start to heal our football wounds. To hope of a brighter future.

Bradford City will experience good times again. It might take a while, but they will return. And when they do, they will taste just as good as the great times of before. They will feel special because of all the difficulties and set backs we go through following the club. Bad times like this test our loyalty, of course they do. But there’s always next season. And so we don’t turn our backs on the club.

Like Loading...
‹ Season review: 2018/19 was the biggest under-achievement in Bradford City’s history
20 years ago: Remembering Bradford City’s remarkable promotion to the Premier League – part one ›