Friday Focus: Is 4-4-2 the answer for Bradford City, or do the issues run deeper? 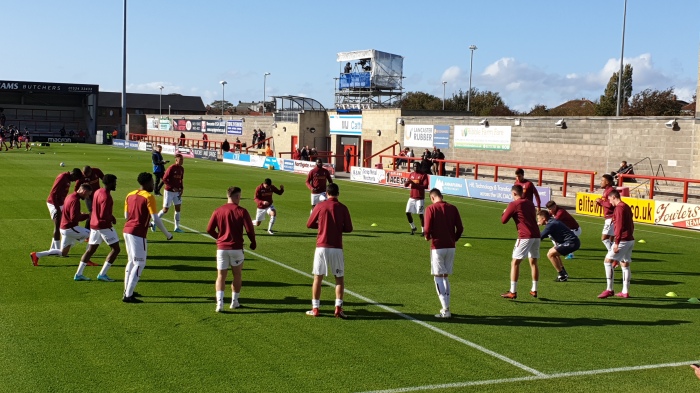 A new, infrequent, bite-size series looking at the stats behind Bradford City’s season.

Bradford City’s recent wobble in form has re-ignited the debate over Gary Bowyer’s tactics. Should we play 4-4-2, 4-3-3 or something else? Is Vaughan too isolated? Does the ball go long too often? Put simply, could Gary Bowyer be getting more out of this team than he is at the moment by setting things up differently?

One of the most common refrains on social media is “It’s League Two. Just play 4-4-2, get lots of crosses in the box and we’ll win.” But is that actually true? If it was, surely you’d see a lot of teams doing this, but they aren’t.

Using information on tactical styles available on whoscored.com, there are only two teams who play 4-4-2 every week and cross the ball a lot. They are our fellow relegated teams Scunthorpe and Walsall, languishing in 16th and 22nd respectively. If 4-4-2 and crossing was the magic formula for this league, surely they would be higher up?

This league is noticeably more varied and sophisticated tactically than the last time we were here. Teams play a wide variety of styles and formations – for example, nine play with a back three, whilst Newport and Stevenage have shifted between so many different systems that it’s difficult to guess how they’ll line up every week.

Despite its reputation as the last bastion of the traditional English 4-4-2, only four teams play the system every week, with another three playing 4-2-3-1 which could reasonably be described as a variant of 4-4-2.

There’s no obvious correlation between formation and success. The top team in the division, Swindon, play 4-4-2 – but the other three are all in the bottom third, including the bottom team Morecambe.

So is there something else tactically that gives a clue as to how to get success? Well, it isn’t crossing. Using whoscored.com’s stats again, there are five teams that cross the ball a lot in the top half of the table, including three in the playoffs, and five in the bottom half. And the most regular crossers in the division? None other than Bradford City, with 23 per game from open play.

It’s not like they’re bad crosses either – 25% hit their target, which is the 8th highest in the division, and we create more shots from crosses than any other team. But that might be the problem – if only one in four crosses are hitting their target, and even fewer are producing genuinely good chances, but that still ranks you quite highly in the division, then the problem might be with crossing itself as a way of creating chances.

Swindon – top of the league and joint top scorers – put in far fewer crosses, attempt more through balls and as a result score more goals. A bit more variety in the way we attack might produce more chances.

So is there a tactical silver bullet? If there is, it comes from how teams pass the ball. The top five teams all try to keep their passes short, and the top four are particularly good at keeping possession. City, meanwhile, play a lot of long passes and aren’t particularly good at keeping the ball, ranking 11th in the division for total possession and 15th for pass completion.

This is what is at the heart of the problem with City at the moment – playing the ball long in a 4-3-3 leaves the central striker with a thankless task. Vaughan can win the ball in the air reasonably well – statistically he’s slightly better than Donaldson at that – but without a strike partner those headers often go to nobody. The midfield are too far away to support when the ball goes long – a shift to a passing game would allow them to get up and support the striker more easily.

With the return of Jake Reeves and Matty Palmer from injury, as well as Callum Cooke, we have some very good technical midfielders who would suit a possession-based game, so it’s not a case like last season where we did not have the personnel to play out from the back without giving the ball away.

It would suit our creative players – the likes of Ismail and Connolly want to get the ball high up the pitch and attack defenders rather than scrambling for flick-ons, and it would help our chance creation if we can learn to create by something other than just crosses. The question is not really one of formation. 4-4-2, 4-3-3, 3-5-2 – they can all work in this league.

Like Loading...
‹ Vote for your Bradford City team of the decade
Vital win can’t disguise the ongoing challenge of fulfilling Bradford City’s potential ›