It’s November 1999, and Bradford City are top of the league! I’m sure it won’t last, but stranger things have happened. Can’t think of any at the moment, but I’m sure they have. Right?

The month starts with international call-ups. Gareth Whalley joins Andy O’Brien in the Ireland squad, while Stuart McCall and Alan Combe are in the Scotland squad again. Remarkably, John Hendrie has also been called up, having clearly impressed Craig Brown with his cameo appearances for me.

Lee Mills hasn’t been called up for England again, but Robbie Blake has – a huge moment for someone who is fast becoming my best player. Sadly, Brazil still prefer Romario and Ronaldo to Edinho – no idea why. 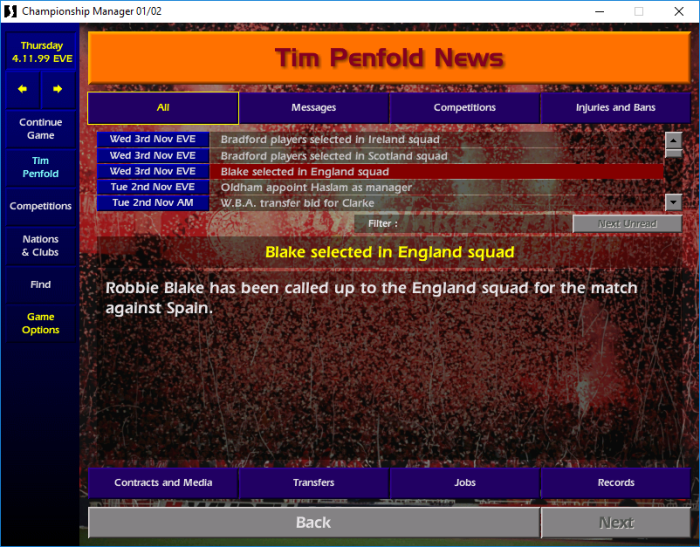 Before the international games, we have a few games – the next one being a trip to our fellow promoted side Wolves. Peter Atherton is back from suspension but stays on the bench, with Michael Standing starting alongside Windass in central midfield.

The game is, to put it bluntly, really boring. Basically nothing happens all game despite me trying to change as much as possible, and it’s a 0-0 draw. Yawn.

We then have a trip to Leicester in the League Cup, and I rotate the team heavily – Combe, Jacobs, Atherton, Beagrie, Whalley, Hendrie and Rankin all come in. Despite the changes, we’re dominant – but we don’t score. Leicester have one shot on target and naturally it goes in. We’re out of the league cup.

We have a quick opportunity for revenge though, as our next league game is at home to Leicester. I name what’s basically my full strength team at the moment – Walsh in goal, a back four of Lee Todd, Alan Rogers, Darren Moore and Andy O’Brien, a midfield diamond of McCall, Windass, Whalley and Blake with Edinho and Mills up front.

Whalley has an immediate impact, setting up Windass after 11 minutes for 1-0, and Robbie Blake gets a goal out of nothing to double the lead. England international (yes, really) Andy Impey pulls a goal back but the visitors go down to ten men when Kevin Horlock is sent off for a bad tackle just before half time.

The second half is very one-sided, but it takes us time to seal it. Finally, Dean Windass sets up Robbie Blake and it ends 3-1.

It’s now the international break, and Stuart McCall and John Hendrie are both selected for Scotland – it’s Hendrie’s debut at the age of 36!

Meanwhile, Robbie Blake gets seven minutes off the bench for England against Spain – a very proud moment. 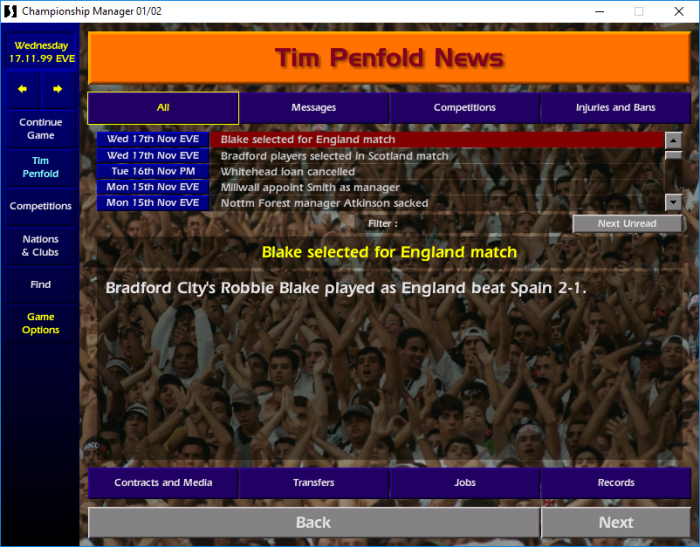 Sadly, he can’t go to Euro 2000 as England didn’t qualify – somehow Glenn Hoddle still has a job despite this. However, Scotland did and that raises the prospect of Stuart McCall going to another tournament.

After the break we travel to Merseyside to play Everton. We’re dominant, but it takes us too long to score – eventually Blake crosses for Mills to head in the opener. However, Darren Moore fouls Danny Cadamarteri in the box and Everton equalise from the spot. There have been too many games recently where we’ve not turned our level of dominance into three points. 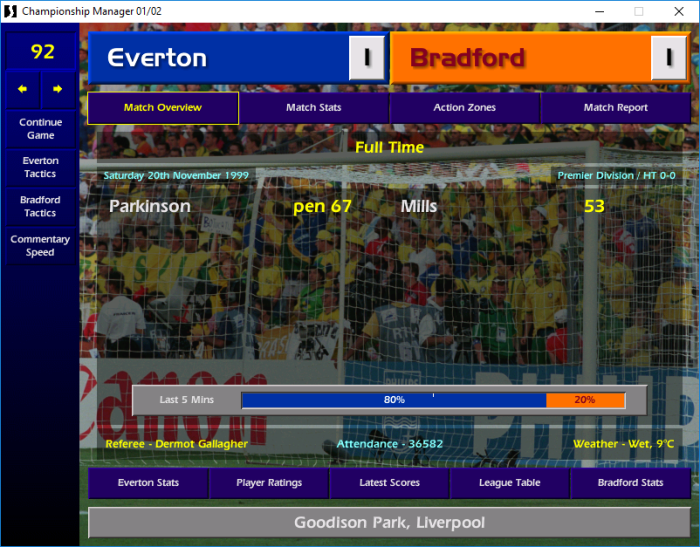 Amazingly, we’re still top, and our next game is at home to 2nd place Arsenal. Did anyone expect that at the start of the season?

We’ve got no new injury worries, so the team is unchanged and takes an early lead – McCall finds space for a cross, Mills heads it down and Blake volleys in for 1-0. Midway through the half we work the ball nicely between Windass, Whalley and Mills, eventually finding Blake again who beats Ronny Johnsen and doubles the lead!

At half time I tell the team to keep it tight and expect an onslaught, but before the hour mark there is another goal…it goes to us, as Edinho exchanges passes before finishing well. 3-0! 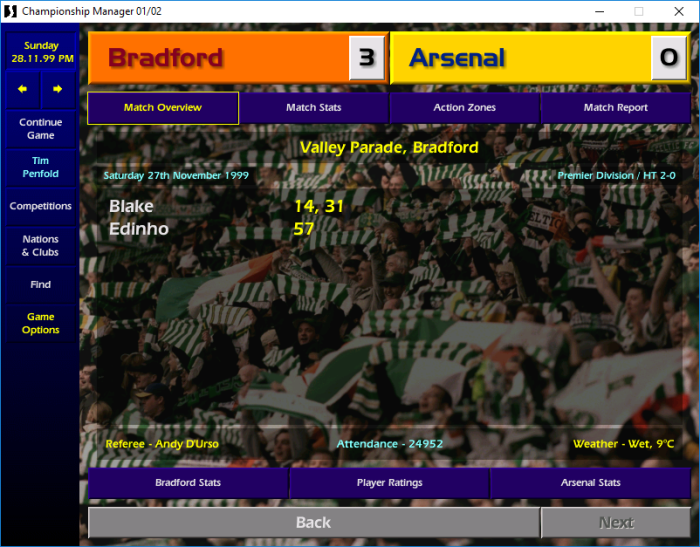 It’s an amazing win, and extends out lead at the top of the table. Four points clear, albeit a game ahead. 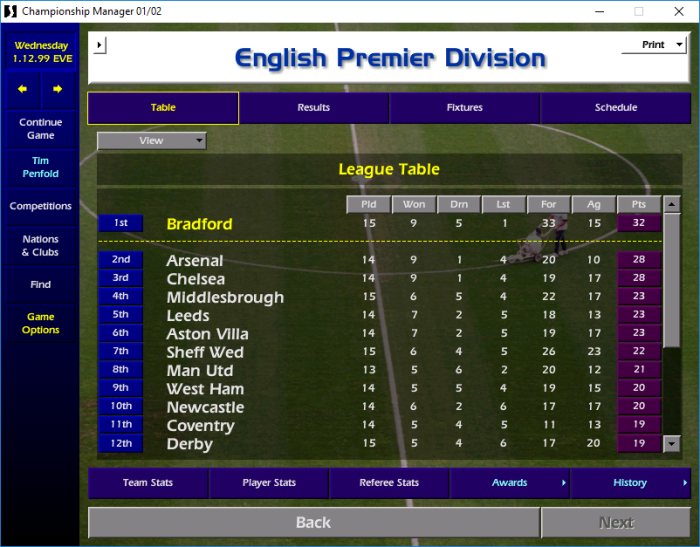 We start December with the game we’d been looking forward to most since promotion – Leeds away. We’re unchanged again.

We don’t start well, and come under a lot of pressure. Eventually it tells, as Windass fouls Dean Richards at a corner to give away a penalty. Polish international Darius Wosz steps up…AND WALSH SAVES!

It’s still 0-0 at half time and we’re a bit lucky that it’s that way. In the second half we go up a gear, and Edinho and Blake have shouts for penalties turned down. I mutter angrily about biased referees, and bring Beagrie on for Whalley. Shortly afterwards Mills sends a cross into the box and it’s Beagrie of all people who gets on the end of it. 1-0!

Derby are the next visitors to Valley Parade, and Beagrie has earned a start ahead of Whalley. We get off to a flyer – Edinho hits the post after nine minutes, then Blake seizes on a Windass knock-down to put us in front.

We don’t let up on the pressure, and a loose ball goes to Edinho who scores the second. Blake then goes on a weaving run past three defenders before making it three – it’s not yet half time. The second half is quieter and we cruise to a 3-0 win.

We then travel to Stamford Bridge to face 3rd place Chelsea, and there’s a problem. Robbie Blake is injured. John Hendrie comes in behind the strikers.

We look like we’re going to get overrun early on so I tell the team to be a bit more patient and cautious, and we start to get a foothold in the game, nearly taking the lead when O’Brien hits the bar from a corner. Just before half time we do take the lead as Mills lobs a pass over the home defence for Edinho to score.

In the second half, we hit the woodwork again, this time through Beagrie, and are looking to extend the lead. It’s against the run of play when Lee Todd fouls Graeme Le Saux in the box, giving away a penalty which is converted by Franck Lebouef. I’m worried we might lose this now, but this team is made of stronger stuff. Windass plays a 1-2 with Beagrie before finding Edinho, and it’s 2-1!

We are ten points clear! Ten! Arsenal do have two games in hand, but even so. Ten points!

The big games keep coming, and our next one is a home game against Man Utd. It’s a bit of a non-event really – scrappy, with no real quality. Hendrie in particular really struggles behind the strikers. We miss Robbie Blake badly, and the game ends 0-0. 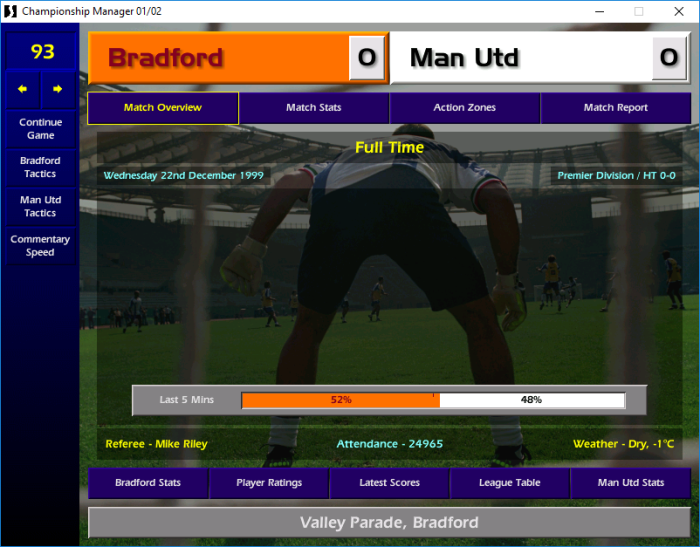 Boxing day sees the visit of Blackburn, and I have to make changes. Paul Bolland comes in for Hendrie, and I shift Windass behind the front two. It works nicely, as Windass sets up Mills for an 11th minute opener.

This is Mills’ first goal for a while, but we don’t follow it up and Blackburn get an equaliser in the second half. This sparks us into life again, and with ten minutes to go Edinho crosses and Mills gets above David Wetherall to make it 2-1.

The final game of the year is a trip to Tottenham. With just two days between the games we have to rotate, and I bring in Whalley, Rankin and Atherton in for Beagrie, Edinho and McCall.

The first half is one-way traffic, but it feels like Spurs have put a brick wall in goal rather than a keeper. We just do not score, then run out of energy in the second half. Darren Anderton and Matt Le Tissier get the goals for the hosts, and we go down to a defeat.

The table on January 1st still looks good though – 6 points clear of Arsenal having played a game more.

The front three have been superb again, as has Stuart McCall. Meanwhile, Alan Rogers has forced himself into the team at left back.

We do have one problem position though – the last midfield slot. There are four contenders – Standing, Beagrie, Whalley and Bolland – but none are really making the position their own. 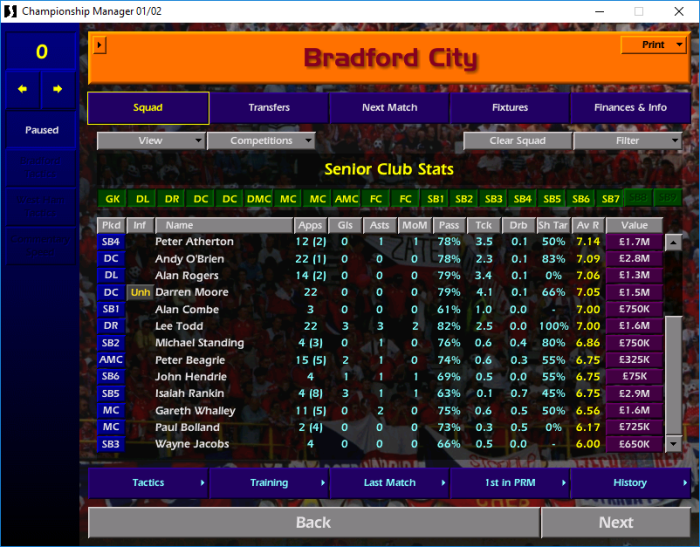 Still, we’re top of the league. Could the new millennium bring a title?