It’s March 2000. In real life, Bradford City’s first season in the top flight was looking like it was going to end in relegation, but in the world of Championship Manager things are a little different. Bradford City are top of the league and in the quarter finals of the FA Cup. This team, made up of the same bunch of apparent has-beens and top-flight rejects that we signed over the years in real life, has somehow taken to Premiership football brilliantly, sweeping aside all in their path.

We start the month at home to our fellow promoted side, Wolves. They haven’t fared so well, and are in the relegation zone. With Robbie Blake injured, Dean Windass continues behind the front two of Mills and Edinho, with Paul Bolland and Michael Standing providing the running in midfield.

We show exactly why the two teams are where they are. Stuart McCall sets up Edinho for an early opener, then Michael Standing doubles the lead, following up a Windass shot. On half time we put together a glorious, flowing move involving Edinho, McCall and Bolland. The ball is then shifted to the overlapping Lee Todd, who sets up Standing to make it 3.

The second half is quieter, but Windass makes it four from a Mills cross. That’s Mills’ last action of the game, as I take the opportunity to rest him and McCall for future games.

We then have the FA Cup quarter final at home to Bolton. I switch things around, with Combe coming in as my cup keeper. Beagrie, Rankin and Wallwork all start, but with Peter Atherton suspended I keep Stuart McCall at the base of the midfield.

The game is no cup classic, and it’s 0-0 at half time. The second half isn’t much better, but Isaiah Rankin is having an excellent cup run and he turns in a rebound from an Edinho shot in the second half. It’s enough to take us into the semi finals, where we’ll face Spurs. 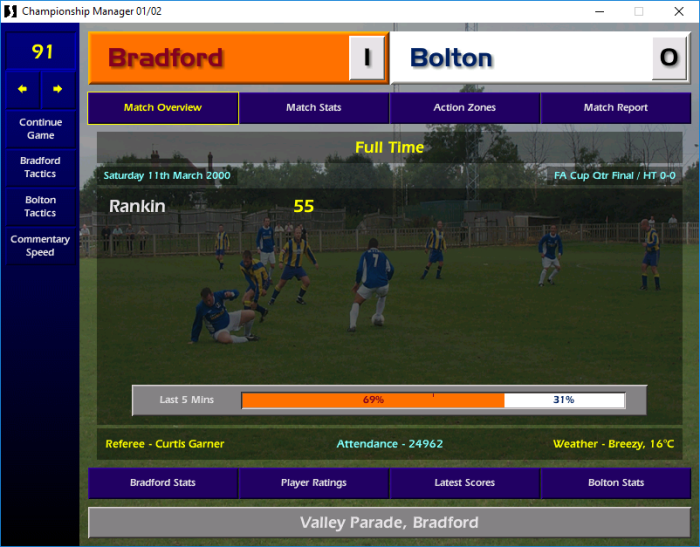 We have another round of international callups. Combe and Stephen Wright get Scotland call-ups, but Stuart McCall is strangely left out despite my reserves getting in. Andy O’Brien gets his usual Ireland call, but Robbie Blake’s injury ensures he doesn’t make the England squad.

The next league game is a trip to Sheffield Wednesday, and I rotate the team again – Atherton in for McCall, and Whalley also starts. Alan Combe gets his first league start of the season for reasons that definitely weren’t me forgetting to swap Walsh in for him. Nope, definitely not.

This is our game in hand – win it, and the gap to 2nd placed Arsenal will be 8 points. The players are clearly fired up, and within 2 minutes we’ve crossed it, Mills has headed it down and Beagrie has smashed it into the net. The hosts fight back, and get a corner, but from it we clear, counterattack and eventually it reaches Mills to double the lead. It’s not over though, with potential signing Benito Carbone pulling one back.

The second half is tense – the game swings back and forth, and isn’t settled until Bolland hammers in a third in stoppage time. There’s still time for another goal though – Mills is fouled in the box, and Lee Todd gives us a flattering 4th goal from the spot. 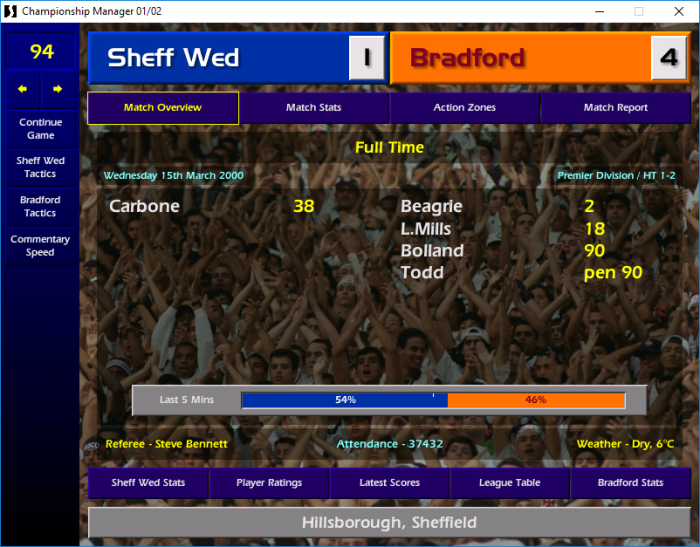 We then have a trip to Aston Villa. Standing, McCall and Walsh all return to the side, as does Alan Rogers who is fit again after injury.

We get off to a flyer, with Darren Moore heading in a Paul Bolland corner for 1-0, then McCall crosses for Beagrie to make it 2-0 after 18 minutes. And after that? Very little. I’m not complaining – it’s a comfortable win, and we’re 8 points clear with 8 to play.

Andy O’Brien picks up another Ireland cap in the international break, and Stephen Wright picks up one for Scotland off the bench. Not sure why, as he’s a permanent sub for me at best. 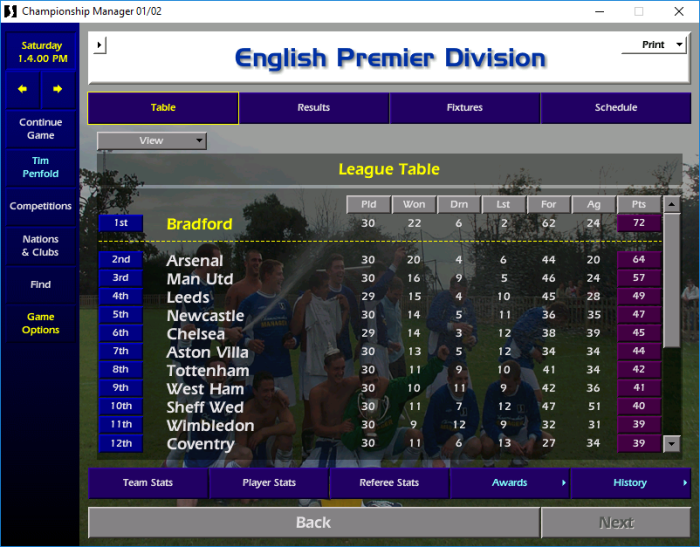 Arsenal start April by drawing, so we can go 10 points clear with our home game against bottom club Stockport. Notably, they start with a certain Phil Parkinson in midfield.

For us, Windass and Blake are back from suspension and injury respectively. I feel so harsh dropping Peter Beagrie, who has done really well in their absence, but I do it.

The game goes exactly how you’d expect top vs bottom to go, which is not something I’m used to as a City fan. After seven minutes Darren Moore strolls out of defence and lofts a pass onto Lee Mills’ head for 1-0, then Robbie Blake heads in an Alan Rogers free kick for 2-0 shortly afterwards. Lee Todd then makes it three from the spot against his old club.

In the second half Peter Atherton comes on to give McCall a breather, and he sets up Blake for a fourth. The day is only slightly spoiled when Kevin Cooper nets a last-minute consolation penalty.

This game breaks a record.

Meanwhile, it’s team of the season time. Gary Walsh, Stuart McCall and Edinho all get in, with Lee Mills on the bench. Robbie Blake is unlucky not to make the squad.

It’s now our biggest week of the season. We start with the FA Cup semi final against Spurs, then in midweek we go to 2nd placed Arsenal for the decisive league game of the season.

Naturally, Edinho picks up an injury and missed both games. For the FA Cup game, I keep faith with my cup keeper Combe, and Peter Atherton also starts ahead of McCall. Rankin starts ahead of Edinho, and Gordon Watson comes on to the bench.

Frustratingly, we don’t show up. Darren Moore is sent off for two bookings within 30 minutes, and I have to shift the team around. It doesn’t work, as Spurs take the lead shortly after and Les Ferdinand grabs a second after half time. No double for us. 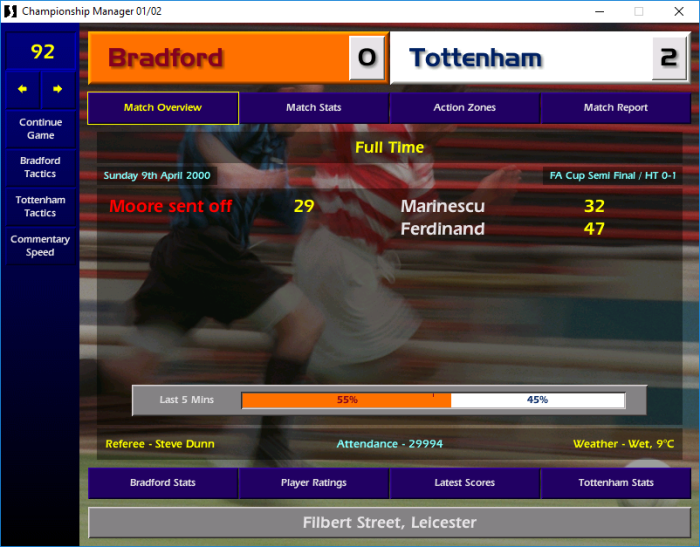 So we go to Arsenal with an exhausted and demoralised team. McCall is still too tired to play despite the rest he got against Spurs, and Bolland also have to miss out. I set up cautiously, and hope for the best.

In the first half, we play well and nearly take the lead when Isaiah Rankin hits the woodwork. In the second half it gets more and more tense, and we drop deeper and deeper, but Arsenal can’t break through. It’s a glorious 0-0. We are ten points clear with six games to go.

International call-ups happen again. O’Brien for Ireland is a certainty, and Combe and Wright keep their Scotland spots. Gareth Whalley gets an Ireland B callup, and Robbie Blake gets back into the England squad.

We’re back closer to full strength for our next game at home to Everton, with McCall and Bolland both back. Everton need the points, as they’re struggling at the wrong end of the table, and Danny Cadamarteri starts for them.

However, Everton are fighting the drop for a reason and it’s an error that gives us the lead. Thomas Myhre slices a goal kick straight to Blake, whose header puts Mills straight through and it’s 1-0. Midway through the half we have a free kick outside the box. Windass’ shot hits the wall but drops straight to O’Brien and it’s 2.

There’s a blow when Alan Rogers goes off injured, but we’re in control and Isaiah Rankin heads in a third right on half time. The second half is a walkover, and Windass grabs a fourth with a great solo goal, before we switch off right at the end and Everton grab a consolation.

Our next game is our toughest remaining one – a trip to Old Trafford. Wayne Jacobs comes in for Alan Rogers in our only change, with Adam Drury on the bench.

I set up a bit more cautiously than usual, and that makes for an uneventful first half until McCall crosses for Rankin to head in the opener. This just provokes Man Utd though, and they come roaring back into it in the second half with goals from Beckham and Cole. We push hard for an equaliser, but we don’t get it.

There are just four games to go for us now, and we’re ten points clear. Our next game is at home to Leeds, but annoyingly Arsenal have games in hand so we can’t quite seal the league if we win.