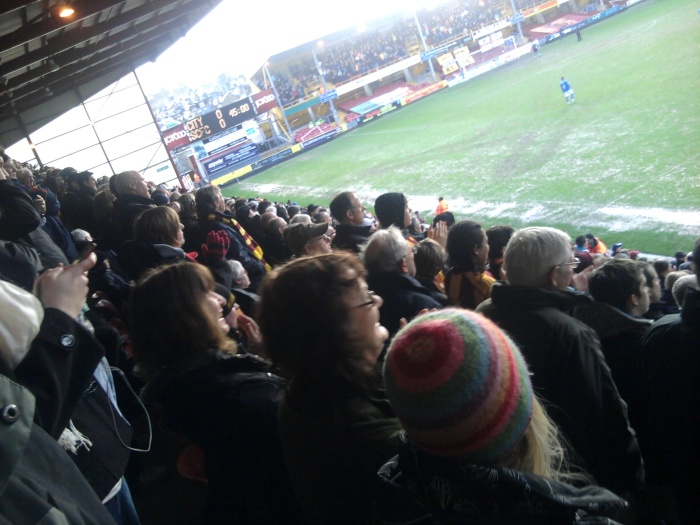 Nine years have passed since Gareth Evans made his exit from Bradford City. He was 23, he’d just had a very difficult season and his confidence looked shot to pieces. A major set back in a career that was showing real promise.

It was 2011 and Bradford City were in a mess. A season where they had began as League Two promotion favourites, under the management of Peter Taylor, had led to an embarrassing 18th-placed finish – the Bantams’ lowest position since the 1960s. As interim manager Peter Jackson pressed forward his claims for the full time management position – playing to the gallery by public bashing his players – every single member of the squad was supposedly put up for sale. An out of contract Evans had no chance of earning another deal, even if he wanted to stay.

More than a decade on from a difficult exit, Evans is a Bradford City player again. He’s been brought back to Valley Parade by the same manager who first lured him to West Yorkshire, in 2009. Stuart McCall will at least know the character of Evans, and what the now 32-year-old can offer a City side that is struggling to score goals.

Evans’ joins from Portsmouth, with a Fratton Park exit that could not be more different in tone to his 2011 Valley Parade departure. Evans has spent five years on the South Coast, making 218 appearances and scoring 38 goals. He helped Portsmouth win the League Two title in 2017, and lift the CheckaTrade trophy in 2019 (he won the man of the match award for his performance at Wembley that day).

News of Evans’ departure from Fratton Park has been greeted with a flood of well wishes from Pompey fans. “Absolutely love Gareth Evans – consummate professional who has never let us down,” wrote one fan. Another added, “Could easily see him in a top L2 team challenging for the title, got nothing but respect for what he has achieved here in the 5yrs he’s been with us.”

“As a player, Evans oozed energy and adventure,” writes local reporter Neil Allen. “From wide right, his reliable delivery produced a steady stream of success, while natural scoring instincts earned him an impressive tally of 38 goals.”

They always say don’t go back, but it’s a footballing wisdom ignored of late in this part of the world. Stuart McCall and Billy Clarke are on their fifth and third spells at Bradford City, whilst Dylan Mottley-Henry, Paudie O’Connor and Callum Cooke left but returned.

The true test of evaluating whether bringing a player or manager back is to assess their career as a whole and ask the question – if they had no previous connection with the club, would we consider them a good signing?

It was a great way of looking at Stuart McCall’s return as player back in 1998. McCall’s exploits in the 80s had him a huge hero at City, and there were fears his 90s return, at 34, would undo much of that hero status. But when you considered McCall’s achievements at Everton and Rangers, his past history at City was almost irrelevant.

Even if he’d never played for the club before, Stuart McCall looked a great player for Bradford City to sign in 1998. And so it proved.

Evans’ career achievements are nowhere near on the same scale as his new manager, but his nine years away from BD8 has seen him develop into a useful lower league player who can, on paper, be considered a decent signing to make right now. The fact City have beaten off competition from other clubs underlines this.

When he left City he moved to South Yorkshire and Rotherham, turning out for the Millers during the final year of their difficult time playing at the Don Valley Stadium, and being there for the big move into their New York stadium home.

Evans started life well at Rotherham. In his first 19 appearances for the club, he scored 6 goals. But a return to his old Valley Parade stomping ground had a negative effect on his time with the Millers.

There appeared to be some lingering bad blood between Evans and his former City team mates. 12 minutes into a November 2011 tussle, Michael Flynn did Evans with a crunching tackle that forced the Rotherham man to depart the field on a stretcher to the sound of City fans laughing. It ruled him out of action for 6 weeks. And even after he returned, Evans struggled to get back to the levels of before, and he missed further chunks of the campaign. He only scored one more goal in 2011/12.

A sense of anger and injustice would probably have been fuelling Evans at the start of the 2012/13 campaign. Especially when, four games in, Bradford City were the visitors to the New York Stadium. After 24 minutes, Evans smashed the ball into the net to put Rotherham 2-0 up. He couldn’t hide his glee, racing up to the City fans behind the goal and goading them in his celebrations.

The angry reaction of some City fans spilled over into near violence, leading to a couple of supporters being escorted from the ground. There was talk of a police investigation into Evans’ inciting behaviour.

Evans netted a second later that day in a 4-0 Rotherham win over City. By that stage, any semblance of a positive relationship with Bantams supporters was badly damaged. Evans spoke post-match about the injury he’d endured at the hands of Flynn nearly a year earlier. He’d not forgiven or forgotten.

“The (first) goal did mean a lot to me. I don’t really want to say too much but, as everyone knows, it was my old club and I had a bad time in my second year there,” he said. “To score was enjoyable, as I felt like I was singled out when we went to Valley Parade last season. I ended up being out for three or four months after that game.”

But Evans was not ultimately going to remain a Miller for long. Steve Evans had taken charge at the end of 2011/12, and despite turning down an offer for Gareth from a Championship club, the forward was shipped out to Fleetwood by November 2012. He came up against City again later that same season, where he was booed during a 2-2 draw at Highbury. But the Bantams had just reached the League Cup Final after overcoming Aston Villa. We had bigger fish to fry. By the end of that season, City were promoted to League One.

Evans stayed at Fleetwood for two and a half seasons. They were promoted to League One in his first full season at the club, before establishing themselves in the third tier the year after. A Boxing Day 2014 defeat at home to Bradford City saw Evans jeered by visiting Bantams fans again. He was subbed off late on, to sarcastic cheers.

He played 46 times, scoring four goals, in his final year at Fleetwood. Before signing for Portsmouth in the summer of 2015. Promotion followed two years later, and the club has consistently pushed for the League One play offs since.

In 2018/19, Evans was on the up and Bradford City were on the way down to League Two. Evans scored the winner as Portsmouth won 1-0 at Valley Parade in November, and the opening goal of a 5-1 demolition of the Bantams the following March.

No one was booing Evans now, we were too consumed with complaining bitterly about our own, under-achieving players.

The biggest transformation between the Evans who signed for City from Macclesfield in 2009, and the one who returns to West Yorkshire this week, is in his position. At Macclesfield, Gareth Evans was a striker. A number 9. 20 goals in just over 80 appearances for the Cheshire club. At City, he was initially partnered up front with another summer arrival – a certain James Hanson – before McCall began Evans’ reinvention.

Ultimately, Evans became a wide striker in a 4-3-3 McCall formation. He was never prolific, but had scored five goals by Christmas. His most memorable McCall moment came in January, with McCall on the brink of losing his job. City were 1-0 down at Torquay with eight minutes to go. A change of manager was about to happen. But then Evans netted twice to turn the game on its head, sparking wild scenes of celebration. When he struck the winner at Plainmoor, Evans raced right over to McCall in celebration.

There was hope at the time that it would be a turning point. The Mark-Robins-goal-that-saved-Alex-Ferguson-moment for McCall. In reality, it just prolonged McCall’s tenure an extra week. Soon he was gone and Peter Taylor came in. Evans remained a regular fixture, scoring two breath-taking goals, against Northampton, in the final home game of the 2009/10 campaign.

Evans netted just three goals the year after, one of which was a penalty. His last City goal was his most important. A stoppage time winner over 9-men Stockport County in Taylor’s last game in charge. A huge, huge goal, given City were sleepwalking towards relegation. Evans did little to impress Peter Jackson and no tears were shed over his summer departure.

At Rotherham, Fleetwood and especially Portsmouth, Evans became less known as a striker. He was remoulded into an attacking midfielder. A number 10, at a push, but usually deployed further back. He’s even played as full back. His move to midfielder seems to suit his talents better, but it makes for a curious return to a club whose supporters still associate him as being a striker. Where, exactly, does McCall plan to play him?

Evans will improve the team but is unlikely to shift the dial. His arrival is a positive step forward but won’t dramatically alter the prospects for promotion. City remain striker-lite, struggling to score goals – and yet to convince they can be up there amongst the front runners. But goals from midfield would certainly be useful.

Evans will add to the creativity. Providing a bit more thrust in wider areas (either in midfield or perhaps even as RWB), where City look light on number and quality. If anyone is going to be sad to see Evans arrive, it’s probably Zeli Ismail. The tricky winger’s first team prospects are more likely to suffer. Ismail has more tricks and natural talent, but his lack of application and effort early doors has been troubling. Evans will offer a lot more endeavour. He is more reliable.

Nine years on from vacating the club, Evans is an older, wiser player. His time away from Valley Parade has been fruitful. He’s not going to change the world, but he’s someone who McCall can rely on to support what he’s trying to build.

A small step in the right direction, for a Bradford City squad that needs greater depth.

Like Loading...
‹ A view of the football club – the outside looking in
Novak’s timely double gets Bradford City’s league season up and running ›