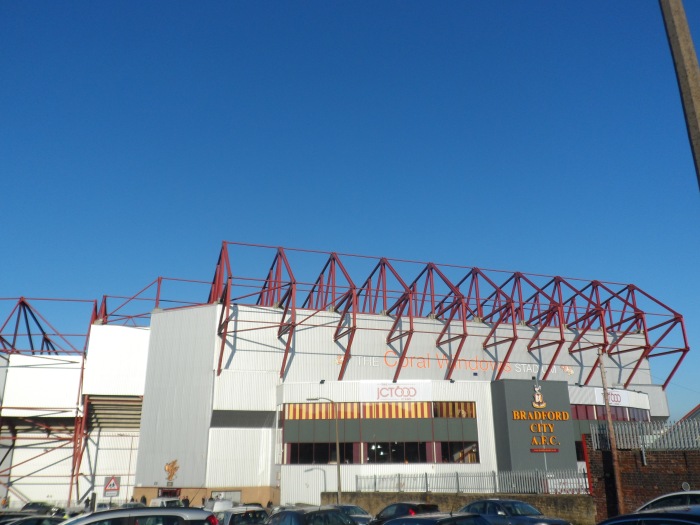 Danny Rowe was the man who ruined Ryan Sparks’ big day. At the end of November, Sparks was inside Valley Parade for the personal landmark occasion of the first game since his appointment as CEO of Bradford City. Oldham were in town for an FA Cup occasion that was settled by a wonder strike from Rowe. It meant there was no fairytale start for Sparks, instead further pressure heaped on his shoulders over the contentious decision to extend Stuart McCall’s contract.

Eight weeks on from that dismal afternoon, Danny Rowe is a Bradford City player. Lured to West Yorkshire for a reported £40k transfer fee, and with claims the Bantams have beaten off significant competition from other League Two clubs to capture the 30-year-old. It is a statement of ambition from the club – the biggest sign yet of a more purposeful January transfer window. And it is a signing that Sparks deserves a lot of credit for.

It’s easy to forget, already, the howls of derision and outrage that Sparks’ promotion to CEO was greeted by from sections of the fanbase. There was anger, condemnation and ridicule. Sparks was deemed too young. Too inexperienced. The cheap option. An indication of the lack of ambition. Compared, unfairly, to Michael Collins even. Written off before he’d even begun.

Two months is way too early to make conclusive judgements or dish out pats on the back, but the progress of Bradford City under Sparks’ jurisdiction is proving impressive. He’s shown a willingness to make tough decisions, but also a drive to make significant changes. The extending of McCall’s deal might have proven a mistake, but it was one Sparks quickly took action to address. His appointment of Mark Trueman and Conor Sellars has so far proven inspired. Whilst the long-standing issues of poor recruitment and a reactive transfer approach have been tackled with the appointment of Lee Turnbull and a front-footed January window strategy.

The club was in a dark, dark place just a few weeks ago. And though the issues are far from fully addressed – and the raft of new signings aren’t guaranteed to be successful – there is a clearer plan emerging. A sense of purpose in the way the club is operating. As the leader running the club day to day, Sparks deserves credit for the turnaround that he is overseeing.

The unhappy reaction of Oldham fans to Rowe’s departure from Boundary Park suggest that City’s latest piece of transfer business could prove inspired. Over a career that began at then-non league Fleetwood Town in 2010, Rowe has so far achieved 232 goals from 431 games. A true 1 in 2 goal striker, who was especially prolific over his five and half seasons at AFC Fylde. Whilst turning out for the ambitious North West club, he netted 192 goals in 293 appearances – making him Fylde’s all-time leading scorer. This is a number nine who knows how to find the back of the net.

Rowe finally made the leap into the Football League almost exactly a year ago when Oldham brought him in during the 2019/20 January window. He scored in his second appearance – a 1-1 draw away at Salford – but found goals hard to come by at first. Netting only two more – both in a 5-0 win over Newport – before Covid suddenly brought football to a halt last March.

This season had so far seen Rowe score eight goals in 22 appearances – 1 in 3. He hasn’t always been manager Harry Kewell’s first choice, but his form in November especially saw Rowe nominated for League Two player of the month. He was finding his swagger at this level, before getting injured in December.

Rowe’s relative lack of Football League experience does leave some small question marks. His form at Oldham appears sporadically good rather than consistently brilliant. But he really fits the bill of what City need, and will help to take the pressure off Lee Novak’s shoulders as City’s leading man. It is, without question, an improvement on the outgoing Kurtis Guthrie. An upgrade during a season when the Bantams have lacked quality in their forward line.

As fans there’s no other type of signing as exciting as a striker. And this is probably the most tantalising mid-season forward arrival since Charlie Wyke in 2017.

As Rowe walks through the door, there was another departure this week in the shape of Jackson Longridge, who has returned to former club Livingston. What can you say when a player who couldn’t get into a bottom six League Two side is snapped up by a Scottish Premier League side, fifth in the table? It’s probably not the greatest statement about the strength of the game North of the Border, but will certainly be a good move for Longridge.

It’s an understatement to say that moving to Valley Parade didn’t work out for Longridge. At the time, his signing from Dunfermline was considered a coup, and potentially he was ear-marked by Gary Bowyer to be first choice left back last season. But the form of Connor Wood – since relegation to League Two – has been hugely impressive. Longridge got just eight minutes league action in 2019/20 – and that came on the opening day – as he remained well down the pecking order. A bad night in the 4-0 home defeat to Preston in the League Cup didn’t exactly help his cause, but he was stuck behind the best player City had last season. As Wood soared, Longridge was left feeding on the scraps of Football League Trophy outings. Eventually, he was loaned out to Torquay.

This season has been no better. Although Wood has struggled to hit the same heights, there has never been the slightest clamour for Longridge to come into the side instead. Once again, it was all about the Football League Trophy games. He got to have just two, 89th minute sub outings in the league under McCall, and not a sniff under Trueman and Sellars. Perhaps if Wood was more susceptible to injuries, Longridge may have got a chance to demonstrate his credentials.

Ultimately, it’s hard to make any conclusive judgements about the Scot. When he played in the cup games, he looked okay. Nothing – Preston aside – to alarm or worry. But he offered little to suggest he should dislodge Wood. He certainly didn’t look as effective going forwards, or as strong in his crossing. Longridge was just simply unlucky that the club’s most accomplished player happened to play in the same position.

With no prospect of that situation changing, and Matty Foulds’ arrival, Longridge’s departure is sensible all around. Hopefully he gets his career running again. His destiny at Valley Parade is to go down as one of the most forgettable players the club has brought in.