It had turned twelve o’clock so I thought I’d better set off for the match. Being a City exile I only had a couple of hours to travel to get to Plainmoor. However, after a rare visit to Valley Parade on Tuesday night to witness a very poor game played in a very poor atmosphere, on a very, very poor pitch I was wondering why I was bothering.

The chances were that City would get trounced by a Torquay side that had won their previous seven games, including a recent away win at Cheltenham who are the best team I have seen in the league this season. Still, I thought, the drive down there is a nice one and I have always found the Gulls fans friendly. Besides, I remember going to Blackpool on a hunch and that started a whole new era for City back in ’96.

Well the drive was a nightmare with heavy rain causing spray all the way. Any travelling City fans should be forgiven for missing the glorious Mendips and other lovely views travelling through Somerset and then Devon. Even the massive new Morrison’s distribution centre at Bridgewater, which makes the ex-Grattan warehouse on Thornton road look like a potting shed, may have been missed in the spray and haste to get to the ground.

Would this make the pitch soggy and be a help to City’s grafters? I put the radio on to listen to the Chelsea v Birmingham game and take my mind off things. Birmingham are one up. Lots of talk of AVB being under pressure. I empathise for him trying to build a team at the sharp end of the season where results count for a lot. I see similarities with his and Phil Parkinson’s dilemma: build whilst maintaining the support of the fans and Board.

Not so the problems of Martin Ling, the Torquay manager, who appears to have the full support of his board, headed by the popular chairman Simon Baker. Mr Baker is developing the club well having lost out in the play-offs last season, had their ambitious manager leave for Bristol Rovers and then their player of the season leave for a ‘big club’ up north – us. He’s managed to make a popular appointment in Ling and is also developing the small ground by building a new stand with money involving the FA, the council and an adjacent school. I doubt there is any HP or selling to pension funds here. He’s also the sort of man that sits where he sat before he was chairman and has his usual pre-match drink in the supporters’ bar, which was where I was heading.

It was very busy in the ‘Boots and Laces’ supporters bar with an audible optimism that reminded me of the Bantams bar during the ‘Premiership years’. There was much cheer from the welcoming Gulls fans that were brightened up by the occasional new scarf.

For our part there were a few City fans wearing versions of Claret and Amber shirts and scarves mingling well with the locals.For many though it had been too much of an ask to set off around six in the morning and it would be or smallest following I have seen at the ground. However, many had planned way back though, with one City fan proudly boasting how he’d only paid £10 each way on the train by booking 3 months ago. He also told me how he’d won a tidy sum at Southend betting on City to win and had bet likewise today. Maybe he’d been at Bloomfield Road back then too.

After a swift drink and a nice chat with some Gulls fans about Guy Branston, who they had heard a rumour was playing, I decided to head out into the rain and get into the ground. Passing the TV I notice AVB’s Chelsea had scrapped a draw having brought the ‘old guard’ on late in the game. By contrast, Parkinson would not have that luxury today as our old guard are now in Exeter, Motherwell and the non-league.

Somewhat relieved I discovered that instead PP had gone for his own senior players and brought back Michael Flynn, Craig Fagan and Simon Ramsden. Men for the Job. I had a brief chat with Lenny the City Gent to pass on a tale about him nearly being ejected from Bristol Rovers’ pitch as they did not recognise him as a regular mascot. I then took my place amongst the sparse City crowd cowering at the back of the stand out of the rain.

Boy oh boy did it rain! Just as the teams were coming out it intensified to tropical rainstorm weather. However, this did not put the City players off as they got stuck into the game. The back four of Marcel Seip, Andrew Davies, Luke Oliver and Ramsden were solid from the off; surely the best city defence since Jacko was playing.

Midfield had Kyel Reid playing fairly deep in support of Seip then making good long runs, which he is apt to do on a good pitch, Ricky Ravenhill and Ritchie Jones mixing it in an often frantic middle of the park and Flynn playing a more attacking role just off the lone striker. On the right Deane Smalley was playing the ‘Fagan’ role – that’s the attacking right-sided midfielder, not the Dickensian role. 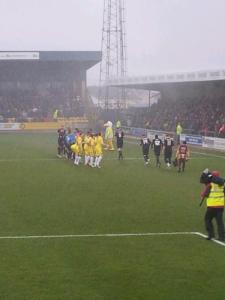 Heavy rain at kick off

However, he did steal a few moves on his opposition and appears to be showing signs of why PP had the faith in him regardless of him not getting into Oxfords 1sts. Up front Fagan himself toiled as Fagan can only do. At times he looks like his legs have gone and at others he makes a telling touch which makes all the differences and creates opportunities.

Indeed, in the opening ten minutes City seemed to have the better chance of scoring but it was the home team that took their opportunity. Against the run of play the impressive Danny Stevens connected with a clever low cross from O’Kane to drive a shot into the bottom corner of the net in front of the City fans. Jon Mac had little chance and, has in the space of two games, been beaten by good shots that have come from the space between defence and midfield; a defensive hole that needs plugging if next season’s aspirations are to be realised. Still we had men on the field who weren’t about to capitulate like some of our recent City incarnations.

By way of warning Davies immediately let loose a thunderbolt effort that the Gulls in form keeper did well to tip over without breaking a wrist. Soon after City were level. Showing both sides of his ability Fagan initially miss-hits a cross from Flynn and then after some grafting by Ravenhill and Reid to keep the ball in the danger zone he managed to score from close range. Brilliant that Fagan.

Just to underline his brilliance he soon plays a return pass to Reid from a lovely lob for the flying winger to blast City into the lead. One hundred and forty went mental. Chants of easy, easy. Giddy as kippers. Why did I ever doubt? The sun was out and shining on City at last. Whilst Torquay had a 15 minute spell of pressure City’s defence held strong and it was the away team that could have come in with a greater lead at the half; Ravenhill particularly unlucky not to score with a curling effort from the edge of the area.

The first half had been a contrast in styles marked by Torquay’s team of confident youngsters willing to try fancy flicks and neat passes down the channels verses a solid defence with combative midfield that counter attacked well. However, Torquay’s diminutive man of the match Stevens and their classy captain Lee Mansell could do little to stop City sapping their confidence by breaking up the play at every opportunity.

In truth the second half was a very scrappy affair where the standard of football on show dropped to the traditional fourth division fayre.  Sure Ellis headed against the bar but City could have scored too had Flynn’s curler drifted in instead of narrowly wide or Fagan converted some of the good counter-attacking chances. City sat deep and defended well, holding the increasingly desperate home team at bay.

Our central defenders deserve special mention in this. Particularly Oliver, who appears to have evolved into footballer with the added advantage of height rather than a lanky lad trying to play footy. He seems to have matured under Parkinson’s stewardship. No more was this apparent than when we equalised. Instead of celebrating, he and his defence were in discussion with Jones about how to plug the aforementioned defensive gap that had earlier led to conceding.

Good signs and another good memory. Travelling to see City and viewing from afar has its good days.

Got a question for Mark Lawn?