Cup Final: The last time we went to Wembley

I was 12, almost 13 years old when Bradford City last got to Wembley. It was the first time that I had been to watch them anywhere other than at Valley Parade.

My memories of the Division Two final in 1996 really begin with the now famous story of the second leg of the play off semi final against Blackpool. I am one of the many people who have lived to regret not going to the Seaside on that wonderful night; although at the time, being 2-0 down from the first leg, it seemed like a good thing that we weren’t making the journey to Bloomfield Road on a school night.

Instead, I listened to the game on the radio in the kitchen at the house where my parents still live today, and I can still vividly remember commentator Chris Cooper’s line when he compared Blackpool Tower to the Twin Towers at the home of English Football.

After the somewhat comprehensive first leg defeat had seemingly ended our hopes of a trip to Wembley, my dad had said to me that if City managed to turn it around, he would take me to the final for my first “away” game. In the years that have passed since, I have increasingly began to wonder if that promise had been made somewhat tongue in cheek.

In fact, even at the time, as I danced around the kitchen in jubilation when Mark Stallard scored City’s third and winning goal at Bloomfield Road, I was already beginning to hope that my dad would be true to his word. It was an anxious few weeks that I had to wait before I had it confirmed that I would be making the trip to the most famous football ground in the world to watch my beloved team, and even then the trip almost didn’t happen.

A couple of weeks before the final and I got into some trouble at school. A Chemistry lesson, a test tube and a Bunsen Burner. It’s a long story but, anyway, I was convinced that as soon as my mum found out, the trip of my lifetime would be cancelled.

I cried at home that night as I desperately tried to think of a way to break the news of my latest indiscretion, without having my hopes and dreams dashed. Eventually, I decided in my teenage wisdom that I would keep quiet until the last possible moment in the hope that it would be too late to cancel my treat.

The days passed, and my anxiety grew as I thought that it was becoming impossible to avoid breaking the news. I had been bought a scarf and a flag for the trip from the club shop. Would this make my parents angrier at my deceit? Or would they, as I hoped, think that seeing as they had already bought the ticket and some merchandise it would be foolish to cancel the trip?

Ultimately, I didn’t tell my parents about what I’d done until a few years after. Who said that being honest is always the best policy? The stakes were too high at the time to risk it.

Instead, I ended up speaking to the teacher who had given me the reprimand. He was a football fan and I thought that if I explained the situation then he would understand. I think I actually cried a bit when I went to see him. My remorse must have shone through though, because he agreed to downgrade my punishment of after school detention to 200 lines; something that was much easier to hide from an angry parent. I can’t for the life in me remember the teacher’s name. But if you are reading this, thank you. 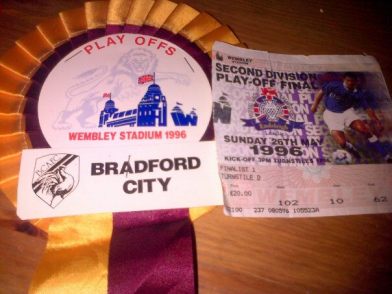 When the big day finally arrived, I was full of excitement and woke up bright and early. We were travelling down with the old Skipton Bantams supporters group. It was only a short walk from our house to the bus station where we would depart from and we had arranged to meet my dad’s friend, Alan, at the end of our road and walk down together with him. Where we sang, “Que Sera Sera”. Yes, Bradford City fans did actually sing it before this season!

I can still remember the journey down to Wembley to this day. There was another one of my dad’s friends sat opposite us on the coach, and he was telling everyone that City would definitely win the game because he was wearing his lucky socks. These lucky socks turned out to be bright pink. Why would any grown man buy bright pink socks? And, furthermore, why would he wear them often enough to discover that they were lucky?

People were chatting and drinking all the way down the motorway and the journey surprisingly seemed to pass quickly. Maybe this was because my dad let me have an alcoholic drink on the way, I probably fell asleep. It wasn’t just any alcoholic drink either. This was 1996 and alcopops were all the rage. Hooch, the alcoholic lemonade was quite popular, but sadly my dad’s mate had decided to go down market for Hooch’s less glamorous cousin – alcoholic Coca Cola. I forget what it was actually called, but it was pretty vile stuff.

The most memorable part of the journey was the stop that the coach made roughly halfway down the motorway at Leicester Forest services. The whole place had been taken over by City fans, and it was a sea of Claret and Amber as coach after coach pulled into the car park. We actually managed to bump into a couple of Notts County fans whilst we were there, but they were vastly outnumbered as they would be at the ground later on.

When we all boarded the coach to complete the second part of our journey, it seemed somewhat of a shame to be leaving the carnival atmosphere behind and this was only compounded when our coach driver somehow inexplicably got lost on his approach to Wembley.

Finally we arrived at the famous old ground and it was time to soak up a bit more of the atmosphere as we walked down Wembley Way. This was May 1996, approximately one month before football came home for the European Championships. I remember the concourse in the ground being decked out ready. There were flags up hanging from the ceiling representing all the countries that would be playing in the Championships. Still, the overriding sight around the stadium was that of 30,000 noisy Bantams in claret and amber. Not much black and white of Notts County was on show. 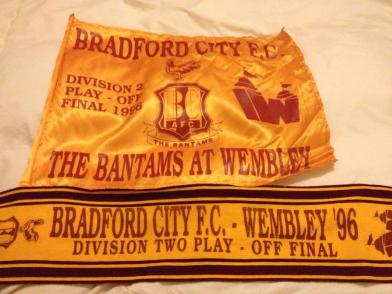 When we walked through into the stadium, the atmosphere was electric and I was delighted to discover that we had excellent seats. We were right in line with edge of the penalty area, about eight rows from the front, at the end of the ground where the tunnel is and where the players would be coming out.

It was also at this point that it really hit home how many more supporters we had at the game compared to Notts County. Whereas we looked like we had sold out our allocation and filled one side of the pitch completely, the Magpies’ fans seemed to be huddled together in a couple of blocks on the opposite side. As the players came out, I remember Kammy waving at the City fans and everyone waving their amber flags. In fact, the flag waving is an overriding memory of the day, as I felt conscious throughout that I was going to hit the people sat in front and behind me as I frantically waved mine.

It’s strange that I don’t actually remember the intricate details of the game itself. Of course I remember that City dominated and never really looked like losing – the pink socks were obviously working their magic. I remember Des Hamilton’s wonder goal and I remember that one of the Notts County centre backs got booked just before we scored our second goal.

Furthermore, I can remember my dad trying to take credit for the second goal, as he said that we should get Sticks onto the pitch in order to put pressure on the centre back who had been booked. Of course, that is what we did and it was Sticks who flicked the ball on for Stallard to score that clincher. That goal was right in front of us, and my only disappointment was that the players ran to the other corner of the pitch to celebrate instead of ours.

The celebrations at the end of the game were incredible and they will live long in the memory, just like those of Wolves  in’99 and Liverpool in ’00. Everyone was singing “There’s only one Chris Kamara” as Eddie Youds lifted the trophy aloft. I think that I sang that song all the way home, and I was certainly signing it loud and proud at school the next week.

I am a bit of a superstitious soul at heart and I have tried to do things as similarly for this year’s Wembley trip as we did for that game in’96. I’ve even gone as far as to make sure that my son his own scarf and flag, even though at two years old he will be too young to attend the game.

Our previous trip to Wembley was the club’s first ever and we managed to reach for that Play Off Final despite being miles off the pace at Easter time in the league. Our second trip to Wembley is going to be for a major cup final, and the way that things are set up in the league this year, who would count against us even making our third trip down to the Home Of Football this season too? Bradford City are a team that certainly like to do things against the odds.

The side team of 1996 wrote their name in our club’s history and, regardless of the result this Sunday, the class of 2013 have managed to do the same. 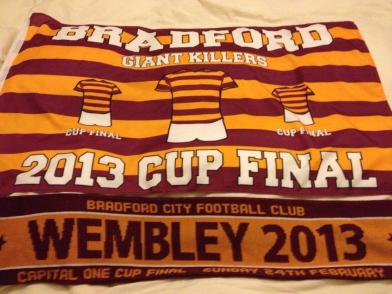 Like Loading...
‹ Cup Final: Special magazine charts City and Swans stories
Cup Final: So long as a round ball is kicked…dreaming of immortality ›