Home › Match Reviews › Losers on the day, but on the day only

If the feeling of excitement and pride at being inside Wembley stadium to watch Bradford City in a major cup final proved even more invigorating than you’d dreamed it could possibly be; sadly, the pre-match fears of a Swansea hiding were equally utterly exceeded by the reality.

A wonderful Swansea side were able to brush us aside with an ease that bordered upon embarrassing. It was a footballing lesson. A humbling. And it hurt a lot to watch it happen. To see our cup heroes destroyed. We didn’t really turn up. We’re better than this. It wouldn’t have made any difference in terms of the outcome, but a stronger City performance would have made losing easier to take.

But it still hurts. A hell of a lot. Yes, we were always rank outsiders in a two horse race. In our heads we knew defeat was inevitable and that the best we should hope for was to score a goal and go down to a respectable scoreline. Yet it doesn’t mean we didn’t want to win. It hasn’t prevented us from wistful daydreams of what it would be like to see Gary Jones lift the cup. We were absolutely desperate to win this match. And to come so far off achieving that aim was difficult to stomach. As my friend put it, while we watched the players go up for their losers’ medals, we will never come this close again in our lifetimes.

All of which should not overshadow what a magnificent day (weekend for some of us) it had been. The tube train towards Wembley was filled with City fans, as between us we looked up pictures posted on Twitter of Leicester Forest service station awash with claret and amber. There were reports that Euston and Kings Cross stations were akin to a Bradford City carnival.

The pubs around Wembley were packed out. We found room, if not cheap beer, at the Hilton Hotel – a magnificent view of the stadium out of the window. Walking down Wembley Way was ace, though nothing could top emerging from the stadium concourse and taking in that first view of the inside of Wembley. And when Rudimental’s ‘Feel the love’ was blasted over the PA system with 30,000 Bradfordonians waving their flags and dancing about, I felt an explosion of joy and pride that I will never, ever forget. One of the best moments of my entire life. This meant so much. 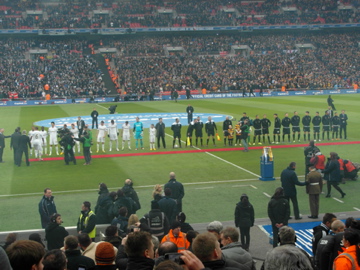 Then the match kicked off, and it all began to go wrong a little too quickly. Swansea kept the ball – we knew they would – but as long as we kept our shape we just had to be patient. 15 minutes gone, barely any City possession and no Swansea effort on goal; but then we had a chance to get forward in numbers, Garry Thompson’s cross was cleared and we were suddenly in big trouble.

Swansea broke at pace. Wayne Routledge charged down the middle, intelligently laid the ball off to Michu on the edge of the area, and the Spaniard’s shot was palmed away by Matt Duke but only into the path of the onrushing Nathan Dyer to tap home. Curtis Good – a curious choice for left back, despite making a decent fist of it in the semis – might have reacted quicker to deny Dyer.

And it began to unravel from there. Swansea’s possession football sucked away any chance of us providing roars of encouragement, because City just didn’t see the ball. When they did, the two widemen Will Atkinson and Thompson were easily outnumbered and the ball quickly lost. James Hanson did well in the air, but Nahki Wells was off the pace and frustratingly unwilling to run behind his strike partner to make something of the flick ons. I don’t understand what happened to Wells at Wembley. The chance to cement his reputation on the biggest stage, but he did not seem to possess the desire to take it.

We needed to get in to half time just one goal down, but five minutes before the interval it was 2-0. We needed to make a strong start to the second half to have any chance, but on 47 minutes Dyer had made it 3-0. Both goals were superb. First, Pablo Hernandez took City players out of the game with a stunning through ball to Michu – the vision and execution was out of our League Two world – and Swansea’s top scorer finished impressively with a shot through Carl McHugh’s legs. The third saw Dyer run at City, pass towards Michu – who dummied the ball so it went to Routledge – and then collect the resultant return ball before cutting inside and firing an unstoppable shot into the roof of the net.

Damage limitation – surely part of the thinking behind the half time switch of the under-performing Good with Andrew Davies – had begun. But just as a minute’s applause in tribute to the 56 City supporters who lost their lives in the Valley Parade fire had begun, Jonathan de Guzman attempted to round Duke, only to be tripped by the City keeper for a certain penalty.

The red card for Duke by Kevin Friend was incredibly harsh. Yes, I know it’s the law and Friend was 100% correct to apply it. I get that. But still…the game was over and it was so unfitting to see the heroic Duke’s cup adventure ended with the indignity of the walk of shame. Football is a cruel, cruel game. As Swansea argued over who should take the penalty, Jon McLaughlin was delayed coming on as sub by Wells seemingly deliberately attempting to ignore his number being put up. Even after his name was read out over the tannoy, Wells took a while to acknowledge it and come off. One can share his disappointment at being taken off, but really we expected more than what he showed us at Wembley.

De Guzman scored for 4-0, and with over half an hour to play and with a man disadvantage, you really did fear the worst. And the disappointment and despondency that set in was so overwhelming you didn’t feel as though you possessed the strength to stand up again.

We wanted this cup win so badly. And though we knew it was a heck of a long shot and to mentally be prepared for dreams to go unfulfilled, we didn’t want it go this way. Still no shot on goal, still no corner. And when we had a chance to break clear and a Swansea player fouled Thompson, we could have carried on attacking but stopped so we could have the free kick – still in our own half. It summed up our timid play. I wanted us to have a go, but we did not.

The despair was engulfing. Next to me my wife began to cry, and I felt a mixture of anguish and guilt in her pain. She’s followed City since 2005 and there’s not been many good times since. This cup run has made up for that and then some, but this final chapter was not befitting. And you think of your friends, family and work colleagues watching this on TV and feel embarrassed. Because this isn’t the Bradford City that fearlessly got us to Wembley.

But then, the chanting in the away end re-commenced and everyone got back up their feet and started waving their flags. It took a few minutes to get on board with this positive act of defiance, but soon enough my spirits felt lifted and the pride that had been lost somewhere around quarter past four began to return. The volume grew louder and louder. The waving quicker and quicker. There seemed to be silence at the Swansea end – perhaps their own achievement in winning the cup was slightly tarnished by how straightforward the victory had proven. You would not have known which side was winning and which one was 4-0 down, simply by looking at the mood in the stands.

The players seemed to be lifted by the wall of noise from the end they were attacking and finally found some adventure. At last, a corner; and then, at last, a shot on goal (Gary Jones). We cheer this moment not sarcastically, but triumphantly. Something that for 80 minutes seemed beyond our limited capabilities has finally happened – a reward for persistence. In in the first 60 minutes Bradford City were all but humiliated, we used the final half hour to restore our dignity.

Sadly Swansea did get a fifth through De Guzman, deep in stoppage time. They looked like they fancied another too, but the final whistle came around much quicker than it seemed it was going to when we had gone 4-0 down. We stayed back to applaud the players as they walked around the stadium, and then as they went up to collect their losers medals. We applauded Swansea as they went up to lift the cup, and then made for the exits as their party truly kicked off. Well done to them, and their fans are a credit to football.

There are now two stages to the grieving process of this cup final defeat. I am truly devastated by the fact we have lost and the way that we lost, and it will take me many, many days – weeks even – to get over this. But when the pain finally eases and the scars heal; what we will be left with is a legacy that can be the catalyst for bigger and better in the league and a collection of memories that we will take to our graves.

Because the joy that we have had from Bradford City’s incredible cup run far outweighs the anguish of this Wembley trashing. We have witnessed moments that will stay with us forever, experienced emotions that we’d forgotten football can provide you, been part of occasions that we thought we’d never be invited to.

We have seen Bradford City – our Bradford City – play at Wembley in a major cup final. And for that we will be forever grateful to the players and the management team who made that possible. We will be forever recalling their exploits to anyone who’ll lend us their ear. Blackpool, Wolves, Liverpool – now joined by Wigan, Arsenal and Villa. Stallard, Waddle, Beagrie, Blake, Wetherall – in the same breath we will utter the names of Duke, Thompson, McArdle, Wells, Hanson. The huge financial windfall of the cup win is calculated on balance sheets, but some things are simply priceless.

Never has a losing cup final team won so much.

With special thanks to Mike Holdsworth for the superb photos

Like Loading...
‹ Cup Final: My great grandfather was an FA Cup winner for Bradford City
Swansea 5 Bradford City 0: How the players performed ›