The play offs: The Burton perspective 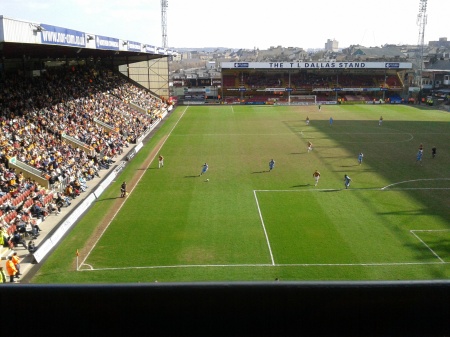 We need very little introduction to our visitors Burton Albion, having already played them three times this season in all competitions. The Brewers finished 4th in the regular league season, only missing out on automatic promotion by two points to Port Vale. They finished seven points better off than Bradford City.

Gary Rowett’s men have done superbly well to get to where they are. At the start of the season, most would have had them down as relegation candidates and I doubt many predicted a play off appearance for them.

Full credit must go to Rowett who this season has proved to be a very good up and coming manager. Having taken over from Paul Peschisolido towards the end of last season, he steered them away from the drop zone and this season has masterminded a terrific campaign, built on an exceptional home form of 17 wins in 23 games – a large indication of why they finished so high in the table. However, on the road The Brewers have slumped to 11 defeats – hopefully number 12 will be forthcoming this Thursday’s evening.

Regardless of whether or not Burton get themselves promoted to League One (and I hope it’s a NOT!) they can be very proud of themselves and how they have developed since entering the Football League back in 2009. This season is there highest ever finish and is also their first ever appearance in the Football League play offs.

For all the good that Burton have done this season, if they don’t get promoted I think they might struggle to replicate a play off challenge in the next couple of years. I would imagine Jacques Maghoma, who has been a real star for Burton over the last couple of seasons, will be targeted by certain League One and Championship clubs. The goal scoring exploits of Billy Kee and Calvin Zola will likely attract unwanted attention from clubs circling for their signatures. If Burton lose those players and fail to get the necessary replacements, the 2012/13 campaign could stand to be a one season wonder for The Brewers.

Like the majority of readers I watched Burton just a couple of weeks ago in the 1-0 City win that secured our place in this season’s play off lottery. They are a hard nut to crack, and a danger going forward; so we certainly will need to professional to have a chance of reaching Wembley. On their last trip to West Yorkshire, Rowett opted to go with Matt Paterson alongside Zola. I personally feel this time around they will go with Kee and Zola. Throw in the likes of Maghoma on the left wing and they will offer a significant goal threat.

What Rowett’s men will be missing is captain Lee Bell, who got Ricky Ravenhill sent off earlier in the season at the Pirelli Stadium and then went for an early bath at Valley Parade last week for an elbow on Zavon Hines. If ever there was an apt moment to say ‘what goes around, comes around’ then this was one. Bell’s red card, coupled with an injury picked up by Jack Dyer, has led to the recall of John McGrath from his loan spell at York City. McGrath, who is the club captain, has struggled to get back in the team since being injured in the early part of the campaign.

I’m not exactly sure what you can take from the two City-Burton league meetings this season, or for that matter the League Cup tie last September. Burton won 1-0 at their place, but a mixture of factors conspired against the Bantams that day – both Luke Oliver and Andrew Davies went off injured, Ravenhill was sent off and the Brewers goal was down to a mix up between Garry Thompson and Jon McLaughlin. Fast forward a few months to the last home game of the season, where James Hanson scored the only goal of the game just before half time. A nervy game, knowing that if Exeter failed to win then City would be in the play offs.

I believe that transpired onto the pitch. It wasn’t the best performance of the season, but it was exactly what was required. In the cup tie Burton led 2-0 until late in the day when off the bench Nahki Wells inspired a remarkable comeback that was capped off by Stephen Darby’s long range strike. So it’s advantage Bradford from the first three games, but what’s gone before needs to be forgotten. These next two games will be a completely different challenge.

With regards to ourselves I think it’s a given that Phil Parkinson will ring the changes from the Cheltenham draw on the last day of the season where the result against Burton a week previous enabled the Bantams gaffer to rest some vital players such as Gary Jones, Hanson and Wells for the 0-0 draw. Garry Thompson came on in the second half at Whaddon Road, but did at least have a rest from starting. Thompson has been in sensational form since Christmas and, in my opinion, his performances over the next couple of games could be key to whether we are to return to Wembley this season.

If we play to our maximum then at home we should be strong enough to not only compete but beat Burton Albion.

We ideally need a cushion to take to The Pirelli Stadium on Sunday. A two-goal lead would certainly be nice, but remember Blackpool all those years ago – nothing is won in the first leg. We have our experiences of big games this season, especially Aston Villa, to gain strength from. We have proved this season that, in one-off games, we have what it takes.

I firmly believe and expect we are strong enough to get past Burton in front of a bumper crowd at Valley Parade. There’s a potential for The Brewers to freeze and, if that happens, we need to take full advantage and put ourselves firmly in the driving seat for a trip to Wembley.