Home comforts on the road 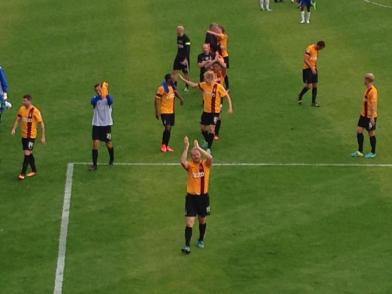 Phil Parkinson faced the media after his Bradford City side earned their first away win of the season talking less about whether Gary Jones or Garry Thompson got the winner and more the benefits of a Friday night discussion with his players. Locked up in a hotel somewhere close to Gillingham, a team meeting was held to discuss how excellent home form could be replicated on the road.

The result was a strategy to approach the game at Gillingham as though it were being played at Valley Parade – that is City playing like the home side, forcing the opponents on the back foot due to the high pressure approach. At Valley Parade we are routinely seeing visiting sides being bullied and overwhelmed by the direct, attacking approach of the Bantams. So for the first time, it was trialled on the road; with an early goal by Jones (or Thompson) settling the game.

So Parkinson achieved only his 11th away league victory in just over two years managing the club, and perhaps a workable strategy that can see this record be improved upon over the coming months. It is to the manager’s credit that he is receptive to the ideas of his dressing room rather than taking an authoritative approach, and it says a lot also about the players that they can be trusted enough for the manager to ask them their views.

The big question is: can taking an attacking approach work in away games? The occasional heavy thrashing cannot be ruled out. Imagine City attempting to play this way at Molineux next February? But equally, a high-intense approach would work well in some away fixtures, and the odd thrashing might be worth it if the overall picture is an improvement in results on the road.

Back in the 1998/99 season, what Parkinson is hinting at adopting more regularly was deployed by Division One (now Championship) side Tranmere Rovers by then-manager John Aldridge. The physical Prenton Park outfit would attempt to play in an attacking manner during away games, catching home sides out by putting them on the back foot. They won only won four games away from home all season and, at Valley Parade, they were beaten 2-0 by the Bantams, with the goals from Robbie Blake and Lee Mills the result of defensive mistakes from being so open. But at the same time, City were one of only six sides who beat Tranmere on their own patch that season. Only runaway Champions Sunderland lost fewer away games.

With City standing proud in the play offs following an excellent start, the only major concern has been the fact that – prior to Saturday – 10 of City’s 12 points had been acquired at Valley Parade. Win most home games and draw most of the away matches will probably prove good enough for a play off spot, but other than an excellent second half at Bristol City on the opening day, performances on the road had up until Saturday being disappointing.

So City may have finally found a workable solution to a problem that would grow in seriousness, the longer away performances proved a let-down. It’s to be hoped that the Gillingham victory is the first of many successful away trips this season.