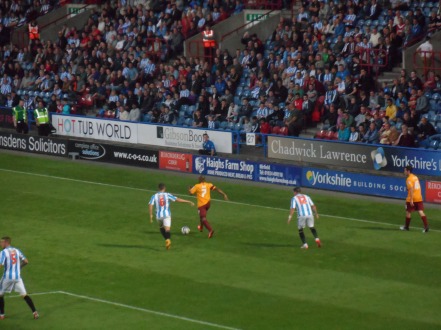 Just how important is the James Hanson and Nahki Wells partnership to City?

Nick: Without Hanson and Wells in tandem there’s a danger that City look almost impotent. The decision to play Yeates in a withdrawn role behind Hanson against Shrewsbury gave me hope that we can still threaten teams even without Nahki’s pace. That said, there’s no getting away from the fact that if either of those two don’t play then we are a far weaker team. Both of them have improved again so far this season. Hanson looks leaner, quicker and is keeping hold of the ball more effectively, whilst Wells is even more clinical.

Andrew: Huge. Luckily Wells’ injury is not too serious, but both players’ strengths are brought out when playing together. The aerial ability and strength of Hanson is a perfect foil for the pace and trickery of Wells, and this classic “little and large” combination works perfectly, and is pivotal to City’s success.

And who else has impressed you so far?

Damien: You certainly can’t look past Andrew Davies, who has been a rock in the centre of defence so far. Davies looks an assured defender at this level and won’t be outmuscled by many. As with Hanson and Wells it is to be hoped he can remain injury free. After some doubts over the first choice goalkeeper it has been reassuring to see Jonny Mac make a decent start to the season. Kyel Reid has also done well and, despite his inconsistencies, remains a key threat in City’s attacking armour. Stephen Darby and James Meredith continue to impress and are probably amongst our most reliable performers – either a big gap to fill if absent from the side.

Phil: Unbelievably, he still gets constant stick from some sections of the City crowd, but I think Kyel Reid has made a wonderful start to the season. He is lively and effective down the wing and has been responsible for a number of game changing moments. He has created a good percentage of our goals this season and bagged a couple of very important ones in the process.

Katie: James Meredith has been on incredible form. Solid defensively bar a poor backpass at Port Vale, and with several assists to his name, he’s such a lively influence down the flanks and one can simply not understate his value to the team. The way in which Luke Oliver so seamlessly slipped back into centre half also impressed me, and it was as though he’d never been away.

Omar: Barring the occasionally hiccup, I think Rory McArdle has been outstanding. He was my man of the match against Carlisle at home – I think that tells you everything about how well we played that day. And Gary Jones. Some thought League One might now be too much for his ageing legs. How wrong could they be? He is once again the heartbeat of the side and optimises everything that is good about Bradford City football club.

Ian: Us lot! The fans. Either the club have vetoed the moaners this year or vice versa but there doesn’t seem to be many this year, or is it just me? The crowds we have taken to away games has always impressed me and it sends a message to people who think we only attend because of cheap season tickets! Rubbish. Saturday’s atmosphere impressed me immensely. Every player seems to get a deserved standing ovation at most games and it really lifts the players. Reid giving his shirt to a fan on Saturday sent shivers down my spine. I just hope the moaners stay away and ‘2 little birds’ becomes a bit of an anthem!

Do you think City need to strengthen in any area?

Katie: I said at the beginning of the season that I was concerned about the lack of full backs at the club. McHugh’s a fantastic centre half, but he’s not a natural left back, and that showed at Huddersfield, when he struggled on the overlap. For a team so reliant on attacking opportunities created from our wingers (Kyel Reid and James Meredith have been jaw-droppingly effective of late), it’s something I’m worrying about, and it’s difficult to envisage how we’d fare if anything happened to Meredith or the highly acclaimed Stephen Darby.

Ian: Goalkeeping. I love Johnny Mac but what happens if he injures himself? I think defence is fine, and there is plenty of competition for places. Same goes for midfield really but I suppose the odd one or two wouldn’t harm the cause, especially seen as how we rely on Jones an awful lot. Attack wise – pleased we have signed Folan and I hope that Gray can find some form. McBurnie can always be giving a run out, although I can’t remember the last youth player to actually become a decent striker for us in the last few years…

City quickly bowed out of the two cup competitions. How disappointed or concerned were you by this?

Katie: I wouldn’t necessarily say I was disappointed about the fact City exited the cups at the first hurdle – to quote the infamous chant, it’s only a cup, and we need to remain focused on the league. But I am concerned at how the team left. In both games, Parkinson fielded sides comprising largely of fringe players; players we’d hope to come in and cover for injuries, players who are supposed to be pushing for a place in the starting eleven, players who can slot in when others are out on international duty. Yet, the reserves thrust into the limelight at Huddersfield and Hartlepool didn’t showcase anything to get excited about and the fighting spirit wasn’t on display at all, and that upset me a little bit.

Omar: I think we are better out of the JPT. I would rather the club play less games and concentrate of giving the league a real go this season. However, the fringe players didn’t do themselves any favour whatsoever in the match away at Hartlepool. Any Bradford City team should have been capable of picking up a win there – but to come away with such a heavy defeat really hurts the chances of the likes of Kennedy, Ravenhill and Taylor making a first team breakthrough any time soon.

Nick: I was annoyed that we rested seven players for the game against Town. I know we did the same thing last year but with it being a derby match I would’ve loved to seen our first eleven that night. As it was, Town’s first team beat our reserves 2-1 and in the grand scheme of things I think our resources are better spent on focusing on the league. As for the JPT I wasn’t remotely bothered to go out in the first round. It’s a tinpot trophy and I’d much rather we kept our midweeks free to prepare for league games at the weekend. Having been to Wembley twice for huge games last season, a visit in the JPT would’ve had even less lustre than it ordinarily would.

Phil: It’s always a disappointment to lose cup matches, but after last year, I think the writing was on the wall pretty early that lady luck would not be shining brightly on City this season! Realistically, a 3rd/4th round venture in the FA Cup would do me just fine this year.

How would you sum up the mood around the club right now?

Damien: The mood around the club seems to be the best it has been for many, many years. This is particularly evident by the atmosphere at the matches so far, though it remains to be seen how a spell of adversity is dealt with – there was certainly a noticeable lull after Colchester’s second goal the other week. Furthermore, the furore over the Lennygate saga and a potential curve ball thrown by Peter Jackson’s memoirs now seem to be consigned to the past, and it definitely remains a great time to be a Bantam.

Andrew: In my time as a City fan, I can’t recall a better feeling around the club than there is at the minute. City teams of old would have been booed off at half time, if 1-0 down. This City team are clapped off, as they give absolutely everything, and Hanson’s winner against Shrewsbury is an example of this never-say-die attitude, and the positive atmosphere at the club at the minute.

Nick: This is the third age of Bantam Progressivism. We had 1981-88, 1996-99 and this crop have the potential to jump two divisions in short order. The mood of the supporters is positive as I’ve known it for a long time and VP is a great place to watch football right now. I hope that when the team hits a bad patch the fans stick with them. They have earned that right.

October looks set to be a very testing month. How do you see it shaping up?

Nick: This month will be a great test of the team – if we can enter November still in the top six, I would consider it a successful month. The games against Preston and Wolves stand out – and when it comes to the big occasion this side rarely disappoints.

Andrew: This month will be a test of how genuine City’s promotion chances are. I would say that three wins out of the next would be a very good return for this month. I doubt that fans will be calling for Parkinson’s head, should we hit a rough patch of form, and the board appear to have full confidence in his ability and the work he has done at the club, which is very encouraging, as it provides stability for Parkinson, the fans, and the club in general.

Ian: I think as the table begins to settle down we’ll see what happens. But a bad thing could be that you play a team lower down and expect to win! That isn’t the case so much at the moment, but the table doesn’t lie does it?

Damien: October, in the recent past, has often seen City struggle, and this may well again be the case, which may have a significant bearing on how the rest of the season unfolds. I certainly don’t expect the same point haul as the previous month and there may well be some League One lessons to learn during the month as genuine title contenders such as Wolves visit VP, together with some tricky away trips including Preston and Crawley. Accordingly, it may well be realistic to be content with a number of draws and the odd defeat or two over this period, and push on from this. Anything less than this and the Bantams may need to replicate their ability to bounce back well from any adversity as demonstrated last season.

At the start of the season Width of a Post writers’ average predicted final position was eighth, have your expectations changed over the past two months?

Damien: Whilst there is a temptation to get carried away and upgrade to a play off spot, this would still feel about right to me. Coping with injuries and/ or a loss of form will be critical together with the January transfer window, which may be an important time with possible new recruits or departures, depending on the league placing at that time, also having an influence on the eventual outcome.

Phil: I think it is realistic to think that a top half finish is possible and we are shaping up nicely to do just that. There are some very strong teams around us and I just don’t think we’ve got enough to mount a sustained play off push. I hope I’m wrong, of course!

Like Loading...
‹ So far, so hugely promising (part two)
Places up for grabs as Bradford City go to Walsall ›