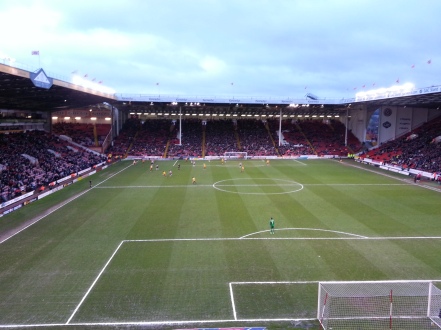 Number 21 – what do you think of? The number of spots on a standard dice? A well known card game? The legal drinking age in the US? That’s a few for starters, but for Bradford City fans it is best known as the shirt number of the now-departed Nakhi Wells (two goals in two games for Huddersfield Town, by the way).

Whoever inherited his shirt certainly had some big boots to fill in trying to replicate what the Bermudian forward did for our club, particularly after last year’s magical season.

The honour of number 21 goes to Aaron McLean; the former Hull City and Peterborough striker, who put pen to paper on a two and a half year deal only just under a week ago. City fans are still muttering the questions: How much is he on? How much was the ‘undisclosed fee?’ These will soon become irrelevant if the London-born man can get his scoring boots on and help City pick up some much-needed points to boost our position in the league.

McLean comes in with some decent figures – over 120 career league goals, and a season best of 29 goals in 45 appearances for Peterborough back in the 2007/08 season, earning him the League Two Golden Boot. 18 goals in 39 games in League One the season after – not bad either. An impressive average of a goal almost every two games for Peterborough, over his four year spell – although his recent goal record has dried up somewhat. One in 14 games prior to arriving at Valley Parade – including loan spells away from Hull at both Ipswich Town and Birmingham in the last year – doesn’t exactly raise the temperatures.

After all the questions and debate, McLean ‘21’ made his debut in Saturday’s 2-2 draw at Sheffield United. He was certainly noticeable with a striking Mohican haircut – you couldn’t miss the fact that James Hanson had a new strike partner. McLean picked a lively game for his debut: a feisty Yorkshire derby full of guts and determination, which resulted in a two-goal comeback for the Bantams and a very decent point.

And what can we say about his debut? Well, not bad at all son. A rousing display where he was deservedly given a standing ovation after being substituted in the final minute for the forgotten man, Andy Gray. McLean looked fresh, sharp and full of running. Most importantly, he played a part in both goals – laying the ball off to Jones for the first and winning the free kick that lead to the second.

It seems as though McLean has been brought in to play a similar role to Wells, in terms of running off Hanson’s headers and flick ons. McLean also appears to have strength amongst his list of attributes; able to hold the ball up and lay it off to others. Pace-wise, he looked nippy and – to the 3,000+ fans’ delight – showed commendable application. He was full of hunger and fight, chasing balls down and demonstrating impressive overall commitment levels. If only Mark Yeates, in particular, could take note – as the former Watford man caused general dismay in the away end, especially after refusing to go in for a 50/50 challenge.

The question is whether McLean can fill the role of Wells, and what about competition from the the other strikers? With Alan Connell seemingly likely to go off on loan, having not even made the bench on Saturday, and the time needed for the inexperienced Oliver McBurnie to adapt to League One football, McLean should be seen as the front runner in partnering Hanson. One can assume Gray will be out of the picture, too.

The Bantams have a 10-day break before the tough tests of high-fliers Preston and Wolves in a week. Phil Parkinson has done the right thing in bringing a striker in, and the manager will be hoping that McLean quickly justifies his judgement, but there is further work to be done. The team simply must improve in its creativity and in supplying chances for this new-look partnership.

The correct man-management of the current squad, along with some interim faces in the January transfer window, should be the next steps towards ensuring this year’s Holy Grail of retaining our League One status.