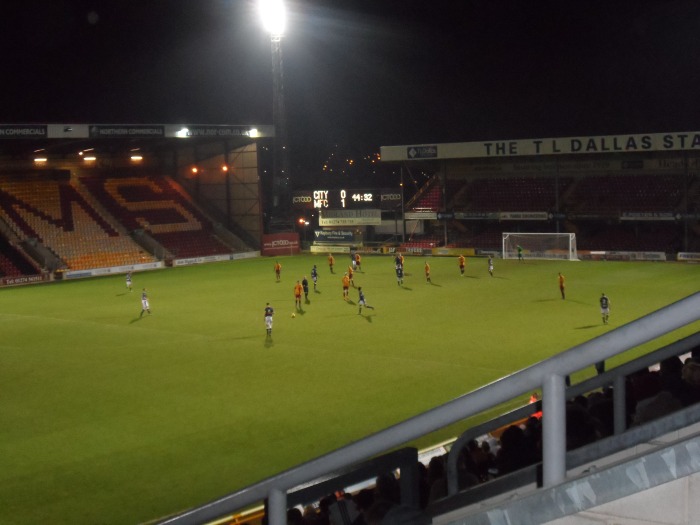 It is entirely possible that, this October, 3,000 or so Bradford City supporters could be sat inside Old Trafford, cheering on the Bantams in a cup tie. Only the home sections of the famous old ground will be sparsely populated, and the players in red unrecognisable to all but hardcore United supporters.

That scenario is said to be on the table at next week’s Football League meeting. As a compromise solution to the FA’s desire for elite clubs’ youth teams to participate in more competitive matches, the Football League is proposing to allow 16 Premier League B teams to enter the Johnstone’s Paint Trophy for the next two seasons. The revised, 64-team competition would feature an new group stage (16 groups of four, with at least one B team in each group) where teams play each other once (the fixtures drawn at random). The winners and runners up of each group would take part in a 32-team knockout tournament similar to the existing competition.

It is an interesting proposal, and the Football League certainly deserves credit for its measured response to the outrageous ideas that the FA put forward, earlier in May, of setting up a League Three for Premier League B teams, who could rise up to League One. A smug Greg Dyke seemed to believe that throwing money at League One and Two clubs would be enough for them to wilfully rip up the fantastic league pyramid that is the envy of other countries, under the misguided notion that it would help the England football team win a World Cup. There are too many non-English players in the Premier League, the FA feels, and up-and-coming talent needs greater challenges than the underwhelming under-23 league.

Funnily enough, the formation of the Premier League in 1992, which has led to all those foreigners playing in the top flight, was supposed to aid the England team. It is laudable that the FA wants to improve the record of the national side, although worth noting that reports of its decline are misleading. Yes, England won the World Cup in 1966, but it was on home soil. They have only once come close to repeating that feat, in Italia 90, and the routine quarter final exits are more a statement of the nation’s strength in world football than any under-performance.

The current issues around the England team are not as bleak as some would have us believe. And in no way do they justify ripping apart the lower leagues.

The JPT idea is certainly a novel one, and the Football League can propose it from a position of authority – making sure that a number of conditions are met by the Premier League and FA. Yet as Football League clubs themselves consider this idea over the next fortnight, there are undoubtedly potential issues that will leave them wondering whether it is worth making any sacrifices to help the elite clubs in the country.

For a start, the three guaranteed JPT group games would increase an already heavily congested fixture list. From a 49-games a season minimum, it would be 51. To get to the JPT final, you would have to play nine matches. For a competition that is unloved to all but those who reach the final stages, that is a lot of extra football to play on top of the demands of a 46-game league season, plus the potential of a more lucrative run in the FA or League Cup.

And rather than make money from a JPT run, clubs could incur losses. When City reached the quarter finals of the competition in the 2011/12, Mark Lawn commented that the club had barely made any money despite a run that had seen them defeat three Yorkshire rivals and appear live on Sky Sports twice. Profits, Lawn said, were only to be had if they reached the two-legged semi final or Wembley final.

With only two teams qualifying from each group, there are bound to be some dead rubber group games that would be a hindrance. Playing for pride, on a cold October or November evening, will not entice crowds. Bradford City vs Hartlepool with both teams unable to qualify? City would be lucky to attract a four-figure crowd.

The added complication to this is that, under current JPT rules, you have to play at least half of your first team in JPT matches or be fined. Again, imagine the frustration of Phil Parkinson, if he has a big league game four days after this supposed Hartlepool fixture? Like Stuart McCall in 2007, he would probably risk having to pay the fine out of his own pocket rather than risk losing an important player to injury.

The commercial benefits of playing a Premier League B team are also minimal. They would be unlikely to bring many of their own supporters, and there will be no star names in their team to entice fans of the Football League club they are playing. You are, effectively, playing a famous name and shirt, rather than team. Perhaps the players on show will one day go onto bigger and better things (or even lift the World Cup, in Dyke’s dreams), but at the time they are nobodies and few people will pay to watch them.

For all its current faults, I do enjoy the JPT and over recent years have travelled around the North watching City in action. Some games have been utter stinkers, others have been thrilling affairs. For an unloved competition, it continues to be relevant partly because its place in the world is not in doubt. Unlike the FA Cup no one bangs tirelessly on about its magic. It does exactly what it says on the Johnstone’s Paint tin.

Ultimately, the Premier League needs to take greater ownership of the issues affecting the national team, and should face greater pressure from the FA to do so. If the Football League want to compromise the future of the JPT by radically changing its format and entry requirements, they had better drive home the best possible deal for the clubs who have to put up with congested fixture lists and unappealing group games. In my view, this deal is above and beyond how the Football League could respond to the original, deeply insulting proposals. Two fingers would have been more appropriate.

The problems at the very top should not be ours to shoulder on our own, and the worry with this compromise is that the JPT could be completely ruined to the point even League One and Two clubs will be begging to enter their own B teams.

Like Loading...
‹ 2013/14 reviewed: On the road again
About our new summer series: ‘A potted history of Bradford City’ ›